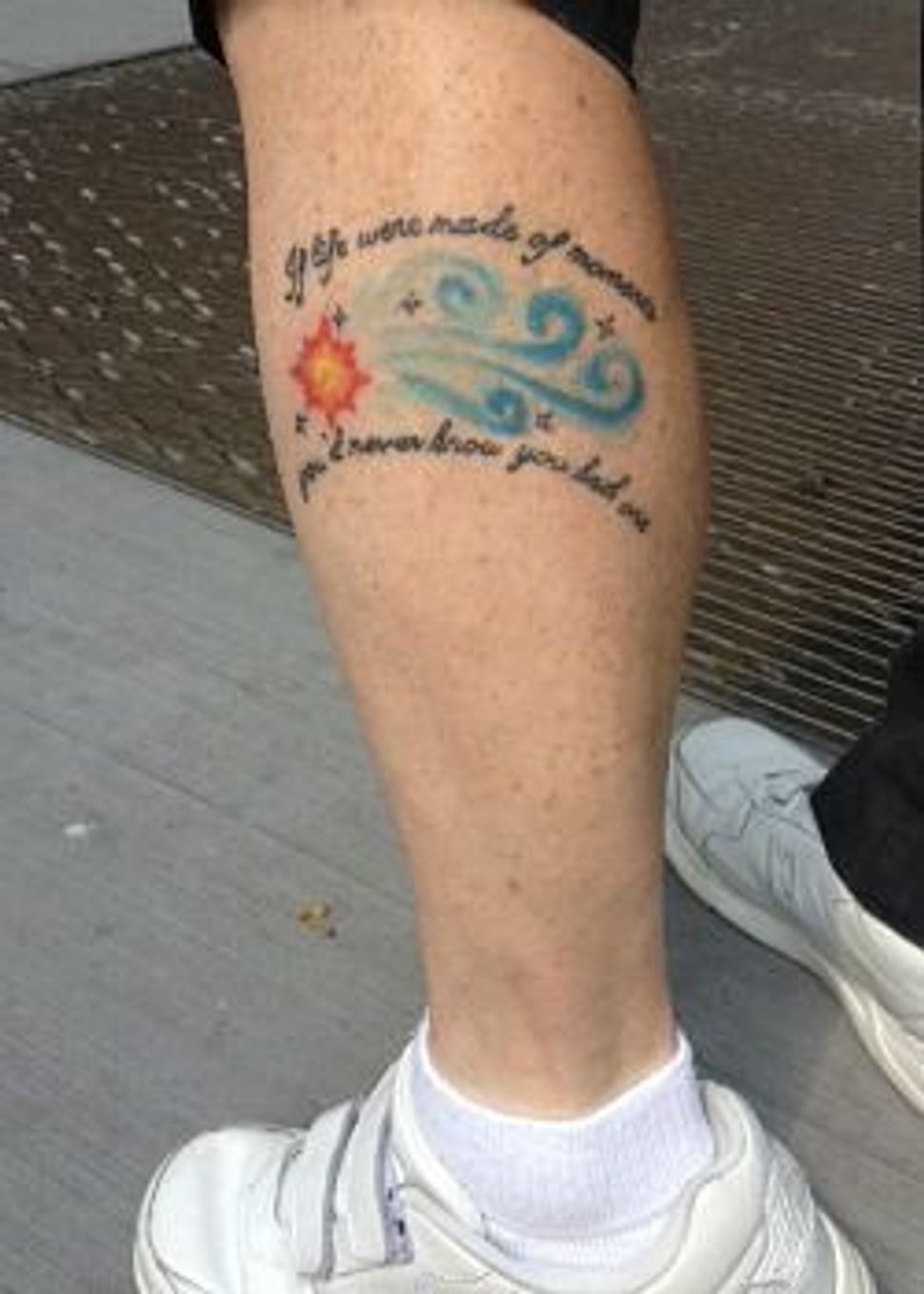 My first tattoo, summer of 2010: Woodstock (not the festival, the little yellow bird from the Peanuts) sitting on a unicorn, both characters wishing on a star. It reflects the childlike innocence I hope to maintain. After I got it, I began to understand why people always say they “crave” ink: By the middle of the next summer, I had a tattoo on each upper arm and one on my inner forearm. And I sported them proudly.

As this summer started, I wanted another tattoo. Inventing a tattoo is fun and a challenge; mine are unique designs that I will never regret: three paw prints representing my beautiful dog and the wonderful dogs I had before her (instead of a name, each paw has a symbol inside it); two fish in the shape of a treble clef, with my astrological Pisces symbol underneath it. I wanted to get one on my leg, and I was determined to get song lyrics; so many songs I love have that one line that just speaks to me.

Reading Playbill.com, I learned of a revival of “Into the Woods.” I absolutely love that show. In addition to seeing the original production, I have it taped off the Public Broadcasting Service and have appeared in a community theater production of it. The musical genius of Stephen Sondheim engulfed me song after song. So many lines are beyond clever, and I started to think of the most memorable ones — the “Ah!” lines. I recalled the middle of “Moments in the Woods,” sung by the Baker’s Wife right after her romp with Cinderella’s Prince and right before she is crushed to death by the Giant. “Oh, if life were made of moments / Even now and then a bad one! / But if life were only moments / Then you’d never know you had one.”

This was always so profound to me, illustrating how we need to have those things that are special to us and not have them sink into the everyday that we take for granted. And I wanted more than just lyrics. What symbolizes a fleeting moment? A shooting star. So, my upper calf now sports a red bursting star with yellow in the center; blue waves with white tint flare behind it, adorned by several tiny black four-point stars. I had to tailor the quote to stand independent of the song. So, above the star it reads, in black cursive type, “If life were made of moments.” And underneath, “You’d never know you had one.”

Getting it hurt — a lot — and as of yet I am not 100% healed. But each weekend I proudly display it. I am often asked what it says, and I am very happy to move in closer so that the person inquiring can read it. Many people I know are not even familiar with the show or with Sondheim, and that makes my tattoo all the more special to me. My only regret is that pretty soon, since I do not wear skirts, I will have to have it covered up on a daily basis.

Teri Zucker is the copy editor of the Forward.