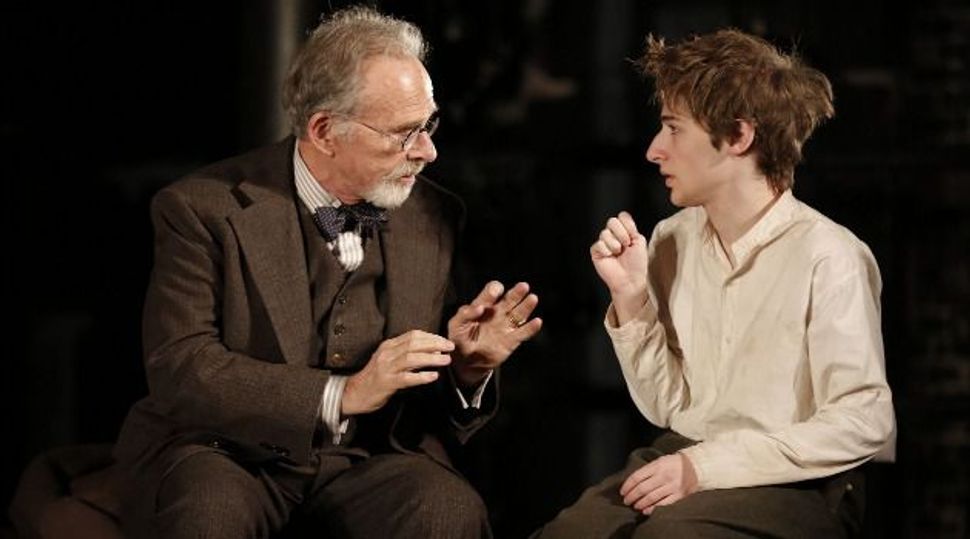 Every writer confronts the possibility of failure. There is no guarantee of being read or if read, of hitting the mark. But no writer expects to succeed and still fail, not through any fault of his own, but because his culture has been destroyed, his language suppressed and his readers murdered. Yet that is the fate of the characters in Nathan Englander’s play “The Twenty-Seventh Man.” In it, a group of Soviet Yiddish writers, rounded up on orders from Stalin, spend their last hours in a prison cell, grappling with the meaning of their work, their lives, and of Yiddish literature in its darkest hour.

Though fictional, the play takes its cue from history. The Soviet Union had once been supportive of Yiddish culture, but following World War II, Stalin turned viciously against it. Institutions were shuttered, publications closed, and Yiddish artists and writers arrested and imprisoned. On August 12, 1952, less than a year before Stalin’s death, five Yiddish writers — Peretz Markish, David Hofstein, Itzik Feffer, Leib Kvitko and David Bergelson — were executed, along with eight other Jewish leaders, following years of imprisonment, interrogation and torture.

Read Q&A with Nathan Englander on the Arty Semite blog.

In Englander’s version, the group expands to 26, plus one unknown scribbler. Perhaps because 27 is an unwieldy number of characters, the group is confined to four, along with a prison guard (Happy Anderson) and the agent in charge (Byron Jennings). They are Yevgeny Zunser (Ron Rifkin), the oldest of the group and a legend of Yiddish letters; Vasily Korinsky (Chip Zien), an ardent propagandist for the Communist Party; Moishe Bretzky, or “Der Glutton”(Daniel Oreskes), a hedonistic nature poet who was dragged to prison from the arms of two prostitutes, and Pinchas Pelovitz (Noah Robbins), an unpublished youth who is equal parts precociousness and potential.

The play is based on Englander’s story of the same name, the first piece in his 2000 collection, “For the Relief of Unbearable Urges.” Englander is a better prose writer than he is a playwright, and his meticulous style isn’t quite suited to the stage. But this story, which consists mostly of dialogue, does lend itself to drama, and the production by the Public Theater, under the direction of Barry Edelstein, is expertly arranged.

The minimal set is properly dungeon-esque, and the costuming — dominated by double-breasted suits with wide pants and lapels — makes the characters look like they stepped out of a period photograph. While the dialogue is often stilted (“We are 27 all together. That was the order from Stalin himself, signed by his hand,” Zunser intones), Chip Zien’s performance as the arrogant, humiliated Korinsky is astoundingly good, and the young Noah Robbins does an impressive job as the precious but endearing Pinchas.

If the symbolism of the four characters wasn’t apparent, Englander makes it explicit. These men could be the Four Sons of the Passover Seder, Pinchas suggests — wise, wicked, simple and the one who does not know how to ask. The inversion of this schema is also apparent, even without any mention. Whereas the Four Sons of the Seder respond to a narrative of redemption, these writers respond to their own tragedy. Zunser has seen not only the loss of his wife and sons, but also his readership “sent up the chimneys.” Korinsky has been betrayed by the ideals to which he has dedicated his life — the glory of communism and the Soviet Union. Pinchas has not only lost his future, but also the opportunity to die for a cause. Only Bretzky seems halfway content, for having had the privilege of living and working during the “Golden Age of Yiddish.”

While it is difficult to represent the horrors of interrogation and torture onstage, the concern of this play is not the brute facts of these characters’ deaths, but the meaning of their lives as Yiddish writers. Zunser, defending the centrality of Yiddish to their identities, exclaims, “Who are we without Yiddish?” It is a cruel irony that here they are, in Englander’s play, without Yiddish. And indeed, much is lost. Yet thanks to “The Twenty-Seventh Man,” the fate of the Soviet Yiddish writers murdered by Stalin will now be known to a much larger group of people than the small crowd of Yiddishists that shows up each year at the YIVO Institute for Jewish Research to commemorate their deaths. That is no small thing.

Throughout the play, Pinchas, unable to face a day without writing, composes a story in his head and recites it to his fellow prisoners just before their execution. In it, a man wakes up to realize that he is dead; he begins to recite the Kaddish. But can he say Kaddish for himself? Unsure, he goes to the rabbi to ask, “Which one of us is to say the prayer?”

The tragedy of Englander’s characters, and of the real people on whom they are based, is that they seemed the sole witnesses to their deaths and the only ones to mourn the work to which they had dedicated their lives. Fortunately, that has proved untrue. While most Soviet Yiddish writers remain unjustifiably obscure, audiences, hopefully, will be moved, to investigate what and whom we really lost. As “The Twenty-Seventh Man” makes plain, they cannot be considered merely victims. As writers, they must be read.

“The Twenty-Seventh Man” runs through December 16 at the Public Theater.

Ezra Glinter is the deputy arts editor of the Forward.