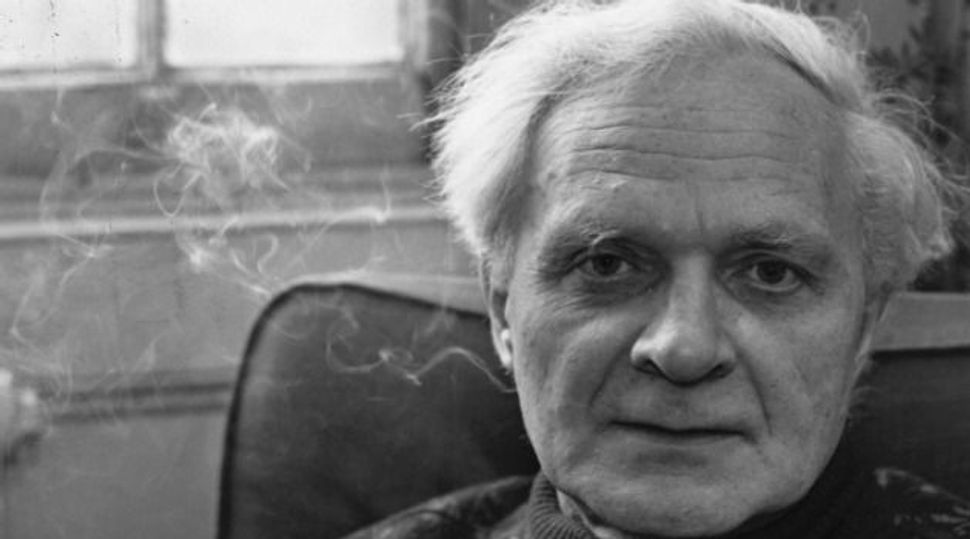 For most of his life, London-born poet Stephen Spender (1909–1995) felt close ties to the Jewish people; he himself was one-quarter Jewish (his mother, Violet Schuster, was from a Jewish family originally from Frankfurt), but his 1941 marriage to Natasha Litvin, a pianist from a Lithuanian Jewish refugee family, strengthened the connection. This is affirmed in Spender’s “New Selected Journals, 1939–1995” recently published by Faber and Faber. Containing some of Spender’s best writing, the new book is a much augmented version of an earlier edition, published in 1986, that shed light on his 1951 memoir, “World Within World.” The 1986 work has achieved semi-classic status. That’s a lot of prose for a poet, without counting a noteworthy 1978 compilation, “The Thirties and After: Poetry, Politics, People, 1933-1975”. In all the aforementioned works, Spender expresses acute awareness of the deadly rise of fascism in prewar Europe, and the subsequent fate of fascism’s victims.

In the early 1930s, Spender presciently penned a novel, “The Temple,” about a young English poet vacationing in Hamburg in 1930 and 1932. In it he clearly outlined the Nazi threat. Left in draft form, this novel would not be published until in 1988.

In 2009, David Aberbach, a professor of Hebrew and comparative studies at McGill University, wrote an essay for the Times Literary Supplement, “Stephen Spender’s Jewish Roots,” pointing to the poet’s belief that the “greatest art is moral,” an idea that hearkens back to the “biblical prophets, for whom poetry was a tool for social change,” according to Aberbach. This applies to Spender’s prose, as his friend, the historian of ideas Isaiah Berlin realized, writing to a friend to state that Spender’s writings used the “moral vocabulary of the Victorians… words like good and bad, right and wrong, kind and cruel,” thereby re-establishing their “moral currency.”

Many friends saw Spender as naive but also shrewd, and he easily became a target of irony. At a 1930 luncheon, T.S. Eliot asked Spender about his future plans. Spender’s reply, “Be a poet,” caused Eliot to object: “I can understand you wanting to write poems, but I don’t quite know what you mean by ‘being a poet.’”

Eliot’s slyly disingenuous dig overlooks the evident difference between poetic writings and poetic deeds. Throughout his life, Spender embraced the civic role of poet, defending persecuted Russian Jewish authors from Boris Pasternak to Joseph Brodsky. In 1972 he co-founded the United Kingdom organization — still extant with accompanying publications — Index on Censorship, in response to Soviet mistreatment of the Jewish physicist Pavel Litvinov, author Alexander Ginzburg and others. In 1993, Spender wrote in “New Selected Journals” of people “whose experiences — of war, imprisonment, destitution are beyond anything I have experienced — yet I am obsessively conscious of them.” Recognizing that others existed, and caring that they suffered, is among Spender’s enduring qualities as a writer. Few if any of Spender’s poems reach this lofty moral plane, but his other writings provide sufficient material for readers to admire today.

On a personal level, Spender also embodied the role of poet, following his friend W.H. Auden’s 1920s edict, “You will always be a poet because you will always be humiliated.” Humiliations aplenty are recounted in “New Selected Journals,” including a 1950 visit to art historian Bernard Berenson, of Lithuanian Jewish ancestry. Berenson asks whether Spender has “misunderstood” his own gifts and if he has ever tried writing a novel. A 1979 passage explains how after hearing “Götterdämmerung” at London’s Covent Garden, Spender broke wind in the street.

It was much louder, after five hours of Wagner, than I had dreamed it could possibly be! Some boys and girls, rather charming, whom I had scarcely noticed, overheard me, or it, and started cheering. In the darkness I was more amused than embarrassed. Then a self-important thought came into my mind. Supposing they knew that this old man walking along Long Acre and farting was Stephen Spender? What would they think?

Consciousness of his potential absurdity did not obviate awareness of others in danger. He recounts a 1930s visit to Rügen island in the Baltic Sea, where he saw a group of young Nazis hoisting a flag with a swastika and told them: “Ich bin ein Jude” (“I am a Jew”), to which the Germans “laughed incredulously: ‘You a Jew? Impossible. Why, you’re the perfect Nordic type,… ‘You’re tall, you have blue eyes, fair hair, Scandinavian features,’ said the other, ‘that’s why we know and like you.’” Detailing the violence that they enjoyed inflicting on Jews, the youths were told by Spender: “Here I am, I’m a Jew, please knock me down,” whereupon the Hitler youths retreated, looking “dazed.”

Spender’s weighing of the moral resonance of historical tragedy is most movingly detailed during a 1952 trip to Israel that was commissioned by George Weidenfeld to report on the Youth Aliyah Child Rescue program. This resulted in the 1953 account “Learning Laughter,” long overdue for reprint. In “Selected Journals,” Spender writes of the experiences of famine that the young Jewish survivors had endured: “I write down these stories of the children, with the feeling that in some way they justify the existence of the State of Israel more than anything else.”

Two decades later, during another visit to Jerusalem after the Yom Kippur War, Spender told fellow visitor Clara Malraux, a French Jewish author, that he could not believe that after the Holocaust, “the conscience of Europe would permit another holocaust to take place in the Middle East,” to which Malraux replied: “Well, it is because I am French that I am what you call pessimistic. I can assure you that the French have completely forgotten about Israel. They could not care less. If Israel disappeared the French would not give it a thought.”

Confronting realism, or sometimes pessimism, with idealism, Spender was nonetheless capable of sharp pen-portraits of friends and acquaintances, which abound in “Selected Journals.” These include observing in Leonard Woolf, Virginia’s widower, in 1955 an “almost antique quality which reminds me of the Romanized Jews of many centuries ago. [Woolf] has added to Jewish intelligence Roman stoicism.” In 1953, Spender wrote of Jeanne Hersch, a Swiss Jewish philosopher who at that time was the lover of the poet Czesław Miłosz: “She looks enormously clever and behind all this there lurks an un-awakened animal. I have often wondered whether anyone would dare to waken this, and raise her existentialist ideas to white-hot intensity.” In 1972 he described George Steiner as looking like the “murderer in ‘M’ played by Peter Lorre. A bit Japanese too. Like an oriental doll made of pieces fitting into one another.” And of the American Jewish physicist J. Robert Oppenheimer, Spender noted, in 1956: “He has a head like that of a very small intelligent boy, with a long back to it, reminding one perhaps of those skulls which were specially elongated by the Egyptians.” Such gimlet-eyed awareness of others is at the heart of Spender’s activism in his chosen social role. Posterity should treasure him as a mensch first, a writer second and a poet third.