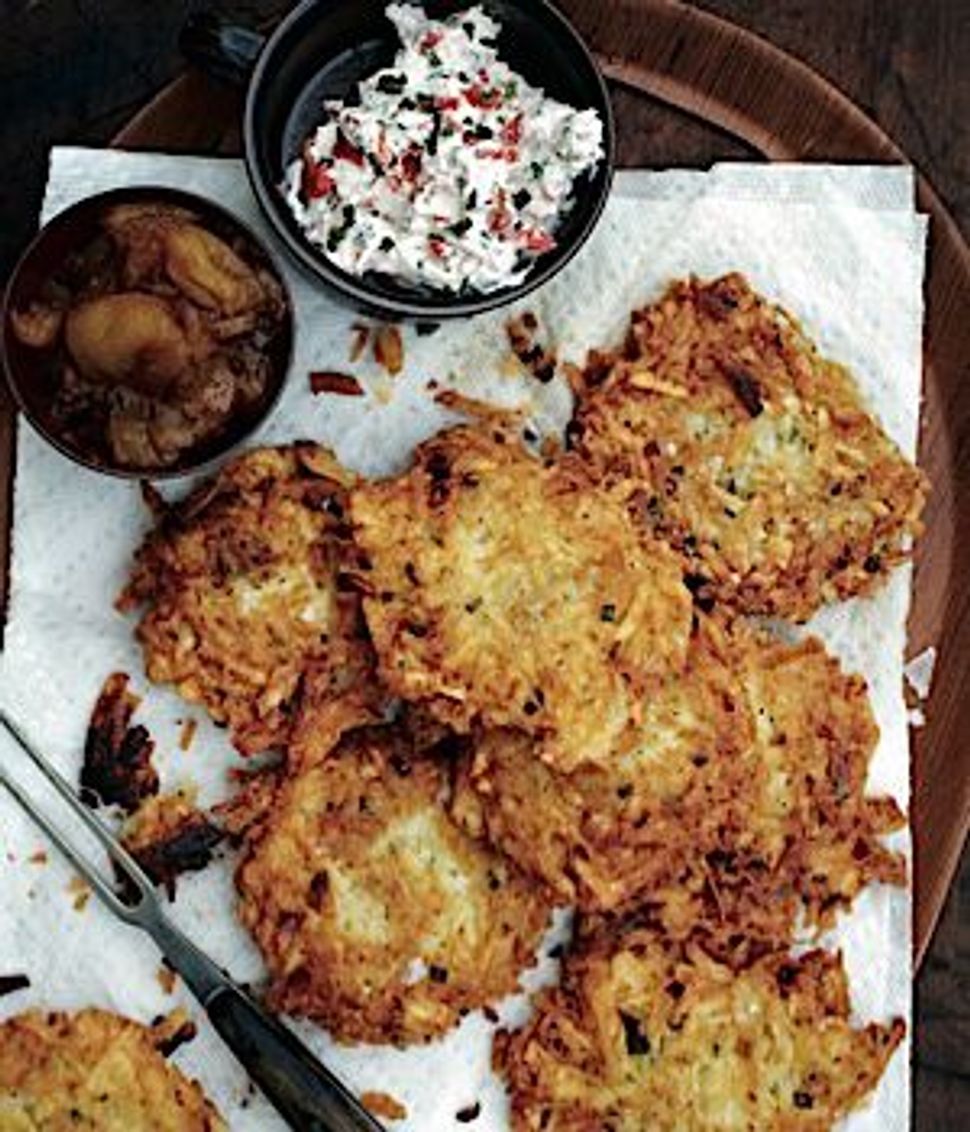 As anyone who has ever stood sweating and swearing in front of a spitting-hot pan of oil knows, the Hanukkah tradition of making latkes is hard work. It requires skill, patience, and a well-developed sense of humor. Luckily, Max and Eli Sussman, brothers and chefs living and cooking in Brooklyn, have all three — and they are willing to share. 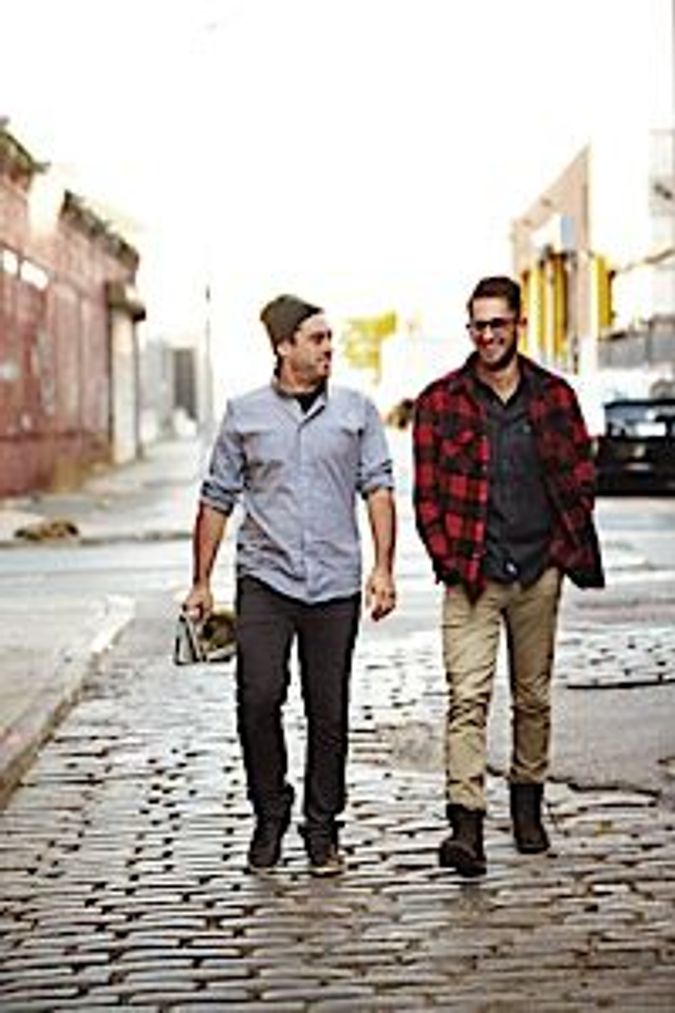 The Detroit-natives now cook at two of New York City’s most beloved restaurants: Max, 29, at the artisanal pizza shop Roberta’s, and Eli, 27, at the nouveau Jewish deli Mile End. They are also co-authors of “This Is a Cookbook: Recipes for Real Life,” which came out this fall.

The book’s premise is based on the brothers’ shared belief that anyone can cook, and cook well, with a little guidance — even when making latkes. So as Hanukkah draws near, they took the time to chat with the Forward about their family’s yearly Hanukkah party and to share tips to ensure that your annual potato fry fest is a success. They also shared their dad’s family-famous latke recipe, which they promise will coat your kitchen floor with oil but leave your friends and family smiling.

Leah Koenig: Do you remember the first time you cooked together?

Max: We were 9 and 11 and on vacation in Maine. We were acting what you might call “very unpleasantly,” so our parents got mad and told us we were on our own for dinner that night. We ended up cooking them a three-course dinner as an apology. I made fish with lemon-butter sauce, and Eli got dressed up and poured them wine.

How did you two know how to cook like that already?

Eli: I’m not sure! It’s probably something we had seen our mom make before. We always helped around the kitchen from a young age, so we watched our mom making dinner most nights and our dad baking challah for Shabbat every week. Being around the kitchen was part of our growing up, and we learned to love it.

What was Hanukkah like in your house while you were growing up?

Eli: It was incredibly fun! Passover was the super-intense Jewish event, but Hanukkah was basically a dinner party where the whole family came over and ate latkes.

Max: Our whole extended family lives in Michigan, so every night of the holiday a different crew would come by. The funny thing is, our dad loves Hanukkah songs more than most human beings. We will humor him and sing a few songs with him. He knows all the verses — trust me, there are more than you think! — and when everyone else stops, he just keeps going. The other major memory of Hanukkah was having our kitchen floor covered in newspapers to absorb the grease flying everywhere during the latke making.

Your dad is the chief latke maker in your house, right?

Eli: Our mom does most of the cooking, but our dad has a few specialties — particularly, challah and latkes. We would snack on the hot ones as soon as they came out of the pan, and by the time everyone got done snacking, nobody wanted to sit down and eat more. He’s also a traditionalist; he never did beet or sweet potato latkes — they were straight up potato.

Max: Yeah, if you start adding different root veggies, you get into fancy hash brown territory. That’s delicious, but a true latke is meant to be grated potato that’s bound and fried.

Did you make any changes to his latke recipe when including it in your book?

Eli: We kept the latkes the same, but the two sauces we include — a lox sour cream and spiced applesauce — are our interpretations on tradition. We made a few simple changes to take everything one level up and give them a more interesting flavor dynamic. The combination of lox and sour cream is particularly Jewish, and adding cinnamon and ginger to the applesauce is a nice way to make it taste even more like fall.

How do you celebrate Hanukkah these days?

Eli: These days we’re almost always working. Since I work at a Jewish-style deli, we’re actually pretty busy on Jewish holidays…. A good amount of our clientele is not Jewish, so it’s cool to bring them into the fold.

What advice do you have for new latke makers who are intimidated by all that oil?

Eli: Make sure you get as much moisture out of the potatoes as possible. Use a dishtowel or paper towels to squeeze out the water, and keep squeezing for longer than you might think. After that, it’s about paying attention that the oil does not get too hot or too cold. When you add latke batter to the pan, you are basically adding cold liquid potato, which brings down the oil’s temperature. So make sure to adjust the heat as necessary. I’d also suggest starting off making latkes on the thinner side so that they fully cook inside as well as brown on the outside. As you make more of them, you start to get a feel for it. At that point, you can experiment with making thicker ones.

Max: Also, when you’re shopping, buy that crazy big bottle of vegetable oil — the one that makes you think, “Why would anyone ever need that?” A lot of people buy a smaller bottle and have to go back to get more in the middle of frying, so don’t underestimate your oil needs!

Eli: The other thing to remember is, Hanukkah is supposed to be fun. You have friends and family coming over, and they are going to be so happy that you made the latkes so they didn’t have to. So relax and enjoy it.

Latkes With Lots of Sauces

Recipe reprinted with permission from ‘This Is a Cookbook: Recipes for Real Life’ (Olive Press). 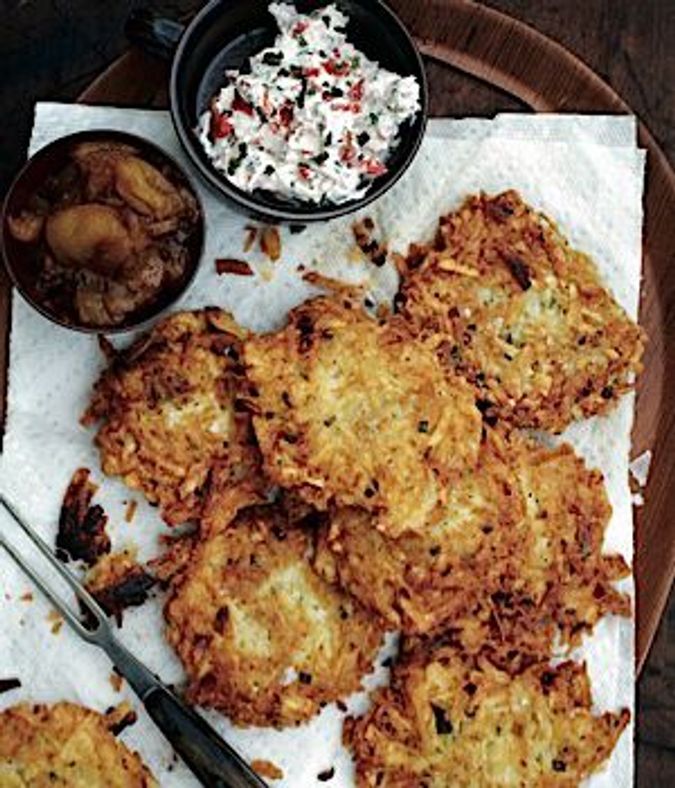 1) Preheat the oven to 200 degrees, and fit a baking sheet with a wire rack. Set aside.

2) Make the sauces: Stir together the ingredients for each in separate small bowls. Transfer to serving dishes and refrigerate.

3) Using the large holes of a box grater, shred the potatoes into a large bowl of water.

4) Drain the potatoes, and rinse under cold water. Drain again, squeezing to remove as much liquid as possible.

5) Transfer potatoes to a clean kitchen towel and squeeze to dry further, then place in a large bowl.

6) Wrap the minced onion in a double thickness of paper towels, squeeze to remove moisture, then add to the bowl.

7) Stir in the eggs, flour, chives, garlic, salt and pepper to taste.

8) Pour the oil into a large frying pan set over medium heat to a depth of about 1/2 inch.

9) Using your hands, scoop up a portion of the potato mixture and shape it into a ball slightly larger than a golfball. Flatten, and place in the oil. Repeat to add 2–3 more latkes, making sure not to crowd the pan.

11) Transfer to the wire rack on the baking sheet, and place in the warm oven. Repeat with remaining latke batter. Serve immediately with sauces.

Leah Koenig writes a monthly column on food and culinary trends. Contact her at [email protected].