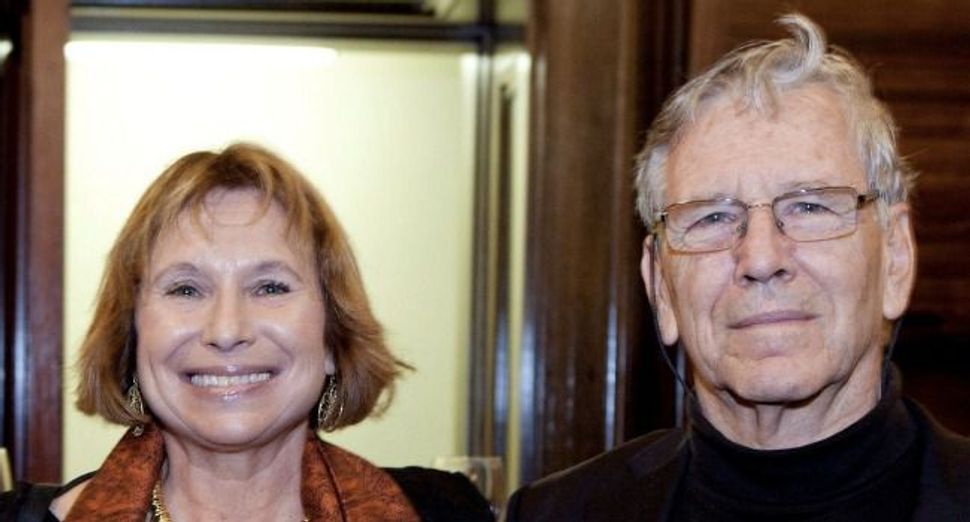 In the epilogue to “Jews and Words,” the authors raise the age-old question “Who is a Jew?” to which they respond, “Whoever is wrestling with the question ‘Who is a Jew?’” It is not an original answer, but it’s compelling nevertheless, not least because it is the first clear articulation of what this slender volume is really all about. Indeed, while the book is titled “Jews and Words,” its subject is less the relationship of Jews with words, with texts, with oral traditions, than it is an attempt — on the part of avowed secularists — to define what it is to be a Jew.

Written by Amos Oz, who is one of Israel’s most celebrated novelists, author of the award-winning memoir “A Tale of Love and Darkness” and a longtime contender for the Nobel Prize, along with his historian daughter, Fania Oz-Salzberger, a professor at Haifa University’s School of Law and Center for European and German Studies, the book is ostensibly an intergenerational dialogue in four parts (the themes are continuity, women, time and the individual vis-à-vis the collective). But while the authors refer now and again to “the novelist among us” or to “the historian among us,” the book, which is written in the first-person plural, does not convey anything of their exchange. There is no sense of a conversation happening on the pages of this volume, let alone any real and pressing disputes or disagreements. Instead, father and daughter seem to be entirely in alignment in their views and in their struggles, which may explain why no dialogue ever emerges in the book: How can there be one between two people who see eye to eye on everything?

The irony, of course, is that this book is rife with arguments, its tone deeply, sometimes disturbingly polemical, and at times even self-contradictory. The authors assert their atheism repeatedly, lambasting and often mocking the faithful, and insisting that the Bible’s authenticity and historicity are irrelevant. Of course, their lack of religious belief does not mitigate their abiding interest in, indeed fascination with, Jewish history and literature — both the sacred and the secular. As they point out: “Good stories carry their own form of truth,” which is to say, the Bible has much that is of value, or of interest, whether you approach it as an atheist or as a believer. And yet, the authors want to know about various events recorded, “whether they happened or not.” In some instances, they hope the stories they have read are true, that the characters they admire, like the biblical daughters of Zelophehad, actually existed.

All this is very human, of course, and in that way the back and forth between reason and a kind of emotional pull to know the “truth” is even endearing. What’s more disconcerting is the way in which the authors insert their atheism and critiques — often justified — of contemporary Orthodoxy (specifically ultra-Orthodoxy in Israel) in contexts where these assertions seem either irrelevant or at the very least redundant. Thus, regarding the talmudic interpretation of the obligation to desecrate the Sabbath in order to save a life, according to which the life in question must be Jewish, the authors deem the ethnic specificity of the injunction to be “obnoxious” (really now?). Referring to other fundamentalist strains of Judaism, they relegate these to “the basement, to gather dust along with other unwanted heirlooms.” And throughout, even as they insist on their deep affinity for Jewish texts, they cite the Greeks and Romans, and their admiration for other literatures, which, they write, often far surpasses Jewish texts. The statements

are in themselves hardly problematic, but they often seem unwarranted, and at times strangely apologetic. Together, what these assertions suggest is a kind of uncertainty, less perhaps about the authors’ stance on God and religion than about their self-identification as Jews. This, too, however, is understandable, especially if one sees this book for what it is: The personal reckonings of two authors — one well advanced in age — with their respective Jewish identities; their attempt to define what being Jewish means to them.

In the process of coming to terms with their own Jewishness, the authors unearth a treasure trove of literary delights, carefully selected from the annals of Jewish history: provocative biblical anecdotes, brilliant bits of Mishnaic, talmudic and Midrashic exegeses; tender Hasidic tales, and, finally, a gorgeous sampling of recent and contemporary secular European, Israeli and American Jewish literature. From the Book of Job to the fiction of I.L. Peretz, and from The Song of Miriam to the poetry of Dan Pagis, these words — particularly in Hebrew and Yiddish — seamlessly strung together form the heart of this book and, for these authors, of Jewish identity itself. The words are as diverse as their sources, and some, as in this excerpt from Yehuda Amichai’s poem “The Jews,” which the authors translated themselves, offer alternative interpretations of what being Jewish means:

The Jews are like photographs displayed in a shop window /All of them together in different heights, living and dead, / Grooms and brides and Bar Mitzvah boys with babies. / And there are pictures restored from old yellowing photographs. / And sometimes people come and break the window / And burn the pictures. And then they begin / To photo anew and develop anew / And display them again aching and smiling.

Amichai’s poem could easily serve as a description of the diversity of texts evoked in this book. From the sacred to the profane, Jewish literature, as it is understood by Oz and Oz-Salzberger, encompasses works that are still very much alive, as well as those that are, in a vital sense, dead, that must be broken, rejected and rendered “anew.” To engage with these texts is to wrestle with them, and wrestle is what these authors do — with texts both ancient and modern, and with questions of identity and meaning. In the process, they uncover beautiful gems, like the one cited above, plucked from a rich and still evolving literary heritage.

Shoshana Olidort is a frequent contributor to the Forward. Her work has also appeared in The New Republic.