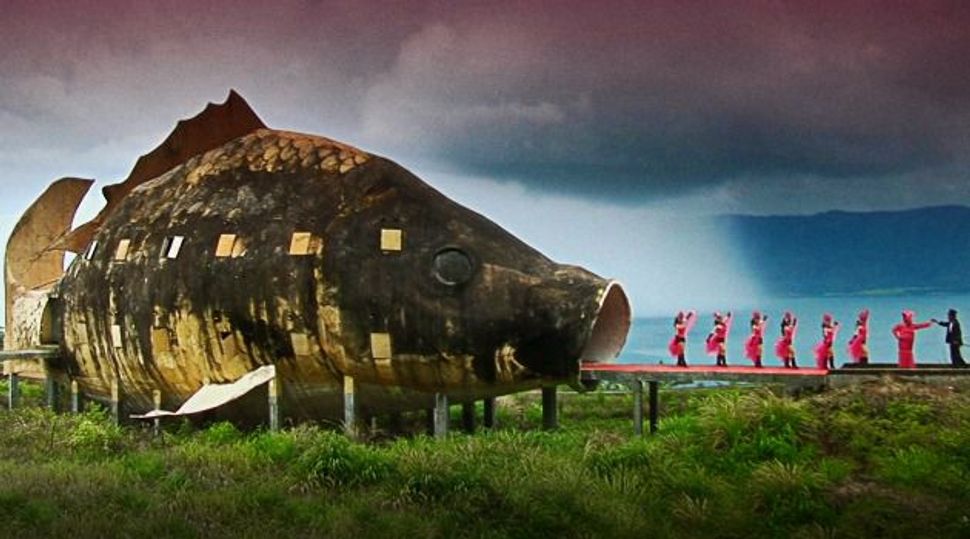 The incendiary and critically acclaimed new documentary, “The Act of Killing,” might at first seem to have little connection with the Jewish experience aside from the background of its director Joshua Oppenheimer: Its subjects are veterans of the 1965 massacres in Indonesia, during which 1,000,000 men, women and children were slaughtered over the course of one year following a United States-backed coup. To make the film, the 37-year-old Oppenheimer and his co-directors eschewed all pretenses of objective storytelling and instead encouraged and empowered their subjects to write, design and perform their bloodiest memories for the camera. His protagonists “directed” their mini-movies with enthusiasm, and Oppenheimer’s film reproduces both their final visions and the shocking process by which they distorted, romanticized and, on occasion, directly faced the horrors of the past.

The protagonists are not the massacres’ survivors, but the killers themselves — the former street thugs who escaped punishment and are now some of the richest and most feared men in the country. The film focuses primarily on Anwar Congo, a genial Nelson Mandela look-alike who slaughtered hundreds, perhaps thousands, of innocent civilians with machetes, garrotes and sometimes even his bare hands. Congo loves both the U.S. and the American gangster movies upon which he models his fearsome persona — hence his complete and perhaps misplaced trust in the young Jewish filmmaker from New Mexico.

The result is an often horrifying exploration of bad faith and the human capacity for denial, especially since Congo couches his past in terms that he’s learned from Hollywood movies and US propaganda. One critic has called the documentary “the most unsettling movie about mass killing since ‘Shoah.’” The comparison with Claude Lanzmann’s masterpiece is apt, and not only because it takes genocide and impunity as its subject. Oppenheimer is the son of political activists and academics and the grandson of several branches of victims and survivors. He spoke with the Forward about the fact that, though his movie is a statement on the impact of globalization, it can also be read as a “backdoor Holocaust movie.”

Sheerly Avni: “Act of Killing” grew out of your first film, “The Globalisation Tapes,” about workers on an Indonesian Palm Oil plantation. Many of these workers had lost family members to the genocides, but one does not hear their voices as victims in “Act of Killing.” Why did you choose to focus on the killers?

Joshua Oppenheimer: When I was first in Indonesia making “The Globalisation Tapes” with survivors of the genocide, of course I felt a real connection to them, and a responsibility to document their stories. But then when I encountered perpetrators who were so boastful and proud of their past deeds, I felt like theirs was the most important story I could follow. I think the tradition of documentary films is that we talk about victims to feel good about ourselves, and to deny the fact that we are much closer to perpetrators than we realize.

Even if we ourselves are the victims, or the descendents of victims?

My father is from Frankfurt and his mother was from Berlin. And my grandfather’s family got out of Germany right before Hitler came to power, but he himself was studying in the U.S. when Hitler came to power. He managed to take a trip to Germany, and he got my mother and her parents out. Everybody else in the family, though, was killed. My stepmother lost her whole family as well, and I grew up about half my childhood with my stepmother. So certainly this was the defining political and moral question of my upbringing: “How do we stop this from happening again?” And by “never again,” I mean without the naïve sense that you can just say “never again” and that it’s going to somehow magically mean never again, especially when history shows that it was happening again and again.

Yes, and that’s the tragedy of the Middle East. It has become “never again to us.” It is a great shame for me, as a Jew and as a person, that we can have a historical lesson like the Holocaust, and yet we don’t learn. What stories were we telling ourselves as Jews that made it acceptable, just three years afterwards, to commit acts of ethnic cleansing? Which is, I’m sorry, what the foundation of the state of Israel was.

But don’t we have to defend ourselves against our enemies?

That’s exactly the problem, right there. Embedded in your question is that idea of “us” and “them.” And as always, it is a “them” that is somehow different, separate, inferior, and therefore we can attack them. That is the system of imagining that we as human beings must overcome. The tragedy of at least one of the dominant narratives by which we as Jews have imagined ourselves, post-Holocaust, is this: We are victims, and therefore we think we have the right to be perpetrators.

It is devastating to see that the perpetrators in your film are still not only running free, but in some cases running the country. Yet you’ve said that though the killers have escaped justice, they have not escaped punishment. Do you think Anwar, for example, has suffered for his crimes?

Anwar Congo has not met with justice, it’s true. But he’s not gone unpunished. You see how he and several other men are haunted. Anwar is a specter by the end of the film. He’s not just haunted; he’s partly dead. And I think we are more like Anwar than we want to believe. The clothes we wear are haunted by the repressive conditions in the places that they were made, that make them so cheap and affordable to us.

Everything — including the computer I’m talking into to record this interview — is haunted by the conditions of the people who made it. All over the world, there are men like Anwar enforcing those conditions. We are maybe not as close to the slaughter as Anwar, but we are partaking of it. The great Indonesian writer Ariel Heryonto says “the essence of real state terror is when people don’t know they’re afraid anymore.” And one of the most powerful reactions we’ve had from the film has been people coming up to us and trying to find words to describe that experience. They use words like “alienation,” “loneliness,” “sadness,” “disconnection.” They’re trying to describe a feeling that we don’t even know we have.