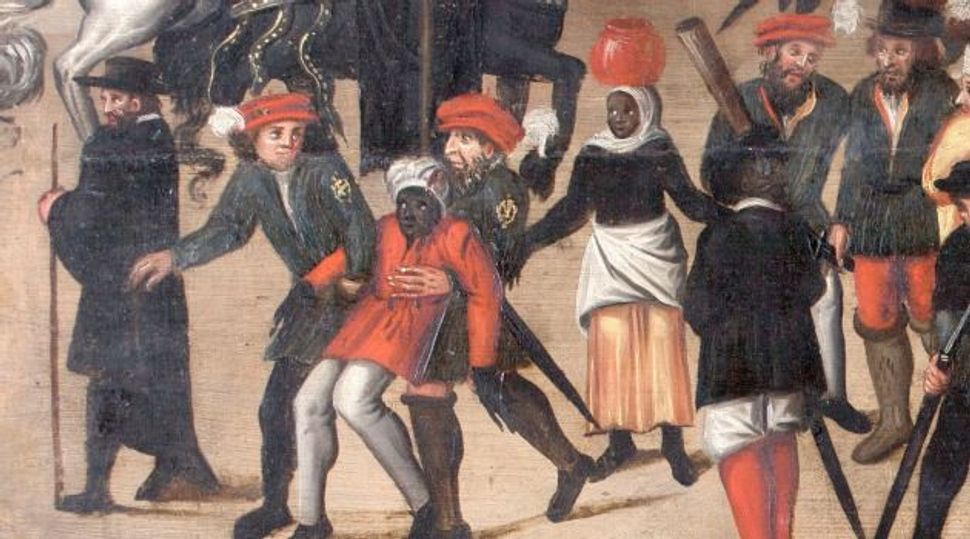 The anonymous 16th-century painter who recorded a scene of everyday life at the king’s fountain (Chafariz d’El Rei) in Lisbon depicted an impressive range of people and animals. In addition to a swan, a seal, fish, horses, dogs and birds, the artist also included more than 150 human figures. There’s so much going on in the busy scene along Lisbon’s port that Joaneath Spicer, the James A. Murnaghan Curator of Renaissance and Baroque Art at the Walters Art Museum in Baltimore, can be forgiven for initially overlooking an important detail. Only after she had finished working on the exhibition catalog did Spicer notice how many Jews appeared in the work.

The artist depicted at least half a dozen Jewish men — the women’s religious identities are more difficult to discern — including two Jewish policemen hauling away a black man who appears, according to the wall text, to be “drunk and sheepish.” The latter figure and several other Africans explain the painting’s appearance in the exhibit “Revealing the African Presence in Renaissance Europe,” which is at the Walters through January 21. It subsequently travels to the Princeton University Art Museum, where it will be shown from February 16 to June 9.

“I was really unaware of the presence of so many Jews in this painting until I began to blow up details of a photo in preparation for installing the work,” says Spicer, who recognized the Jewish figures from research she conducted for a 1996 article, “The Star of David and Jewish Culture in Prague around 1600,” which appeared in The Journal of the Walters Art Gallery. “This is the only image I know of — certainly painting from this period that purports to show Jews from life.”

Paintings of everyday life were popular in Flanders but not in Portugal, so the anonymous painter was probably a Flemish visitor inspired by the urban scene, according to Spicer. The painting is not only unprecedented for its portrayal of so many Jews — who have long beards, flat berets and yellow circles affixed to their clothes, per Charles V’s ruling — in the 1500s, but also for its depiction of so many African figures. Jews and blacks lived in coterminous neighborhoods at the port, which was considered less desirable real estate.

Although medieval Jewish law isn’t even a minor focus of the exhibit, a comparison can be made between approaches to slavery under Jewish and European law. Jewish law permits several forms of slavery, but as Maimonides recorded in the “Laws of Slaves” (9:8) in his “Mishneh Torah,” the “early wise men” had their servants fed before they themselves ate, and shared the same menu as their slaves. Jewish masters are even charged with speaking “calmly” to their slaves and controlling their anger, for they are both children of the same God.

Viewers who read the wall texts at the Walters learn that though Africans were sold as slaves to Europe, their children were free. That’s why many of the African figures in the 16th-century painting are identifiable by their capes as free men. One — who may be João de Sá Panasco, who worked his way up from slave and jester to gentleman — is shown riding a horse and wearing the symbol of the Order of St. James.

Walking through the exhibit, Spicer explained that she didn’t want to rehash some of the mistakes she observed in an exhibit titled “Black Is Beautiful” that was shown in Amsterdam a few years ago. The show didn’t openly address slavery and prejudice, and was “a big whitewash, almost literally” in its apparent concern about making white visitors comfortable, she said.

“There were a lot of pressures on me to, in some way, do something of the same thing here, but I just — that was not my sense of the audience, and so I was just determined to play it straight,” she said. “Once you allow yourself to talk about it and relax ever so slightly, then you see [that] the associations that you bring from knowledge of American history just aren’t necessary.”

There is no reason to assume that U.S. slavery resembled European slavery in the 1500s, says Spicer. “The fact that at the beginning of this period most of the slaves were white does go a long way,” she said.

But even if slavery during this time period is more complicated than one might guess, being a slave wasn’t comfortable by any means. One black man carrying a water jug on his head in the 16th-century painting wears chains, which were typically attached to a slave who tried to run away.

Others devised different strategies. As the exhibit catalog recounts, the forcibly converted former Jew Hector Nunes, who lived in London, went to court seeking to force a “slave” he had purchased from an English sailor to work. Evidently, the man’s refusal to serve his “master” held water, as the court told Nunes the only thing he could do was to sue for his money back. That might not have been what Maimonides had in mind, but it does help underscore one of the main points of the exhibit, which is that the stories of individual African men and women — rather than explorations of slave “types” — are well worth studying and reflecting upon.

Menachem Wecker writes frequently about the arts for the Forward.