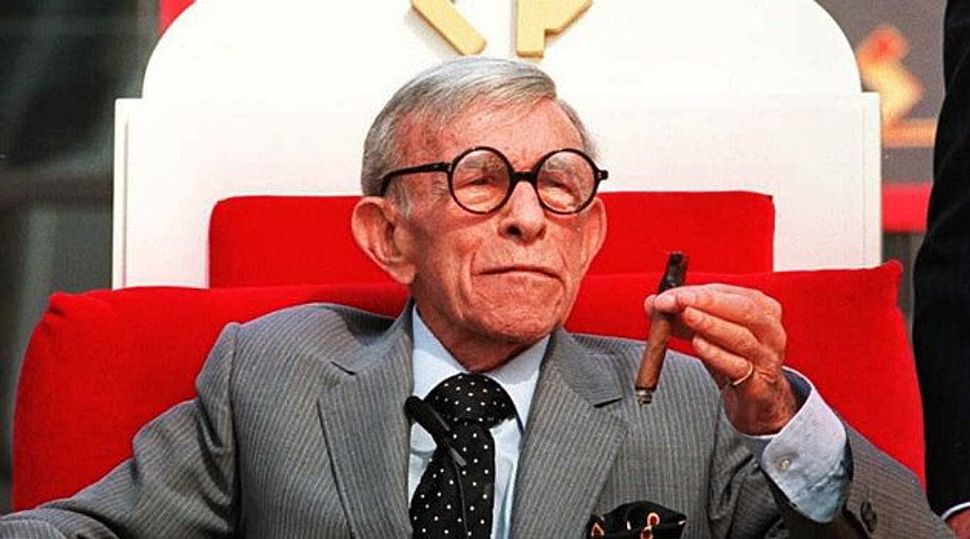 Oh God, You Abbreviator: Writing ?the Holy One Blessed Be He? as HKB?H is just one example of many abbreviations the Jewish language utilizes. Image by Getty Images

Howard Schranz wants to know the origin and exact meaning of the Yiddish word nebekh. “When I was 11,” he writes, “after my father, a”h, died, I heard a lot of nebekh thrown my way. I know it meant something like, ‘It’s pitiful,’ and I quickly tired of being called that. Show some sympathy if you like, but please don’t tell me that I’m pitiful or even inordinately unfortunate! And am I right that nebekh and ‘nebbish’ are related?”

I’ll get to nebekh in a moment. First, though, permit me to comment on what some readers must have found puzzling in Mr. Schranz’s letter — namely, the line, “When I was 11, after my father, a”h, died.” What, they are asking, does ‘a”h’ mean?

Others of you know or can guess that it’s an abbreviation of the Hebrew words alav ha-shalom (Yiddish olov hasholem), “peace be upon him,” traditionally said after the mention of a beloved or admired person who is no longer alive. (If the deceased is a woman, one says aleha ha-shalom.) In speaking Hebrew, Yiddish or any other Jewish language, these words are uttered in full. In writing they are represented by the Hebrew letters ayin-heh, ה”ע, with a Hebrew sign that resembles a quotation mark between them. This sign, known as a gershayim, goes before the last letter of any abbreviation to indicate that this is what it is.

I don’t know whether or not Mr. Schrantz is an observant Jew, but chances are he is, because the replication of such Hebrew or Aramaic abbreviations in English has become increasingly common in America’s Orthodox, English-speaking community. Rather than translate the phrase in question into English and then abbreviate it, in which case one would get “pboh” for “peace be on him” (a usage commonly adopted by English-speaking Muslims when mentioning the Prophet Muhammad), the practice is to abbreviate it untranslated in Latin characters, sometimes using capital letters and sometimes not.

So, for example, the lead sentence of a March, 17, 2010, story from the Yeshiva World News was, “A Jewish woman was R”L killed [yesterday] after she was pinned under a bus in the East Tremont section of the Bronx.” ‘R”L’ is short for rachmana litslan, Aramaic for “May the compassionate one [that is, God] save us,” a phrase often used after mentioning misfortune in order to express the wish that nothing of the sort happen to the speaker or his listeners. (This is similar to the Yiddish nisht far unz gedakht, discussed by me several weeks ago.) And here is a sentence from an Orthodox blog, written by a young woman who is tired of being an object of sympathy because of her unmarried state: “At the L’Chaim [the celebration of a cousin’s engagement], I kept politely accepting ‘IY”H by yous’ and thanking everyone and smiling.”

‘IY”H’ is short for im yirtseh ha-shem, “if God wills it,” and the young lady’s well-wishers were telling her they hoped that, with some help from above, her turn, too, would come soon.

Finally, here are excerpts from an Internet chat room discussion I logged on to concerning ultra-Orthodox attitudes toward Zionism and the State of Israel. I have spelled the abbreviated Hebrew words according to the Ashkenazi pronunciation of the participants.

Participant 1: “We are not allowed to establish a Jewish state [while] in golus [exile].”
Participant 2: “Why do you say that it’s forbidden?”
Participant 1: “It was the opinion of the Satmar rebbe zt”l [zekher tsaddik livrokheh, “May the righteous man’s memory be a blessing”] that we can’t establish a government in E”Y [eretz yisrol, “the Land of Israel”] without Moshiach [the Messiah].”
Participant 3: “Neturei Karta [an extreme anti-Zionist group of ultra-Orthodox Jews based in Jerusalem] hugs rotzchim [murderers] who want to kill Jews. Their point is that [ultra-Orthodox rabbis who accept the State of Israel, like] Rav [Rabbi Aharon Leib] Shteinman, shlit”a [she’yikhyeh l’yomim toyvim v’arukhim — “May he live a long and good life”] and Rav [Rabbi Yosef Shalom] Elyashiv, shlit”a, are Zionists, and that those who threaten to kill them are our friends.”
Participant 4: “Neturei Karta has a point like Hitler y”sh [yemakh shmoy — “May his name be blotted out”] had a point.”
Participant 1: “I never meant that, c”v [chas ve’sholem — “God forbid”].
Participant 2: “Even though it [the State of Israel] is not Al Pi Halacha [according to Jewish law], it’s still in Jewish hands and we’re muvtach [promised] from HKB”H [ha-kodosh borukh hu — “the Holy One Blessed Be He”] that it won’t leave [that is, that it will remain forever].”

There are many more Latin-charactered Hebrew and Aramaic abbreviations of this sort currently in use in the Orthodox and ultra-Orthodox worlds, such as ‘b”h’for barukh ha-shem, “God be blessed”; ‘b”n’ for bli neder, “without a vow” (commonly said after making a promise or declaring an intention in order to make clear that it is not religiously binding); ‘bs”d’ for be’siyata di’shmaya, “with the help of heaven” (frequently written at the top of a letter or written communication to invoke God’s help), etc.

The ‘a”h’ of Mr. Schranz’s letter is thus part of a widespread trend. His query about nebekh, however, will, nebekh, have to wait until next week.