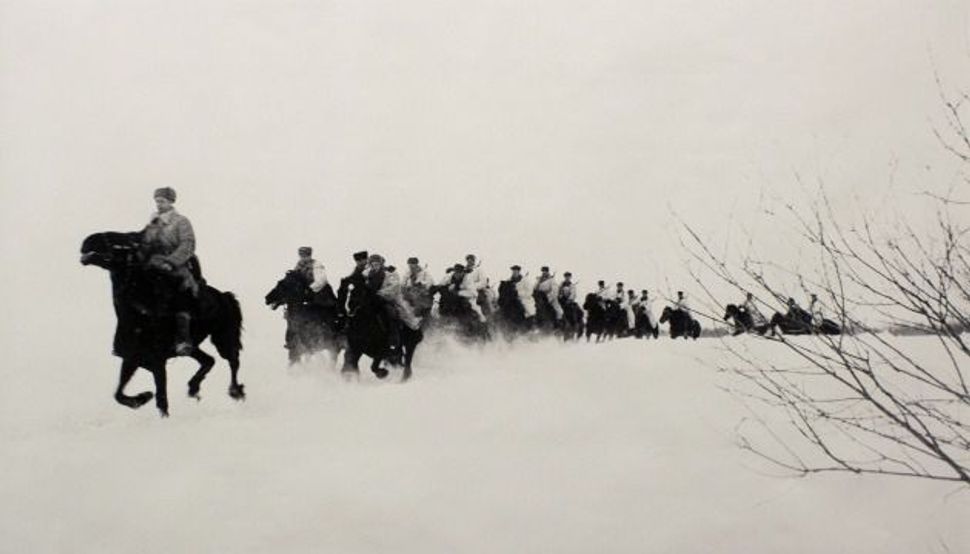 In Beauteous Battle: Dmitri Baltermants?s 1941 photograph depicts a scene ?Behind Enemy Lines.? Image by COURTESY OF MUSEUM OF JEWISH HERITAGE

‘Through Soviet Jewish Eyes: Photography, War and the Holocaust,” on display at the Museum of Jewish Heritage — A Living Memorial to the Holocaust through the first week of April, is a must-see exhibition of beautiful photographs taken by Soviet Jewish photojournalists during World War II. Organized by historian David Shneer and curator Lisa Tamiris Becker, both at the University of Colorado Boulder, and based on Shneer’s book of the same title, these pictures are eloquent records of battlegrounds, destruction, victory and death.

To describe the images as beautiful may seem problematic; beauty is not what we expect to see in war photography. On the contrary, we have long come to insist on a documentary aesthetic of pitiless truth and candor, no matter how painful or horrifying the sight. Shneer’s study, in fact, tells such a tale, with detailed accounts of such Nazi atrocities as the massacre of civilians at the Ukrainian City of Kerch and the Soviet liberation of the death camps Majdanek and Auschwitz.

In the museum presentation, however, the Soviet view of the Great Patriotic War is more heroic than hellish. Many of these pictures are almost theatrical in their reportage. Prewar Soviet photography celebrated its revolutionary society through modernist, quasi-abstract designs; this is Mark Markov-Grinberg’s approach in his image of the “Kursk Front” (1943), the photo taken in a trench where a soldier crouches beneath the mechanical bulk of a tank passing overhead. But in contrast to such stark modernist close-ups, much of the work in this exhibition adheres to the formats of Soviet Socialist Realism, a more pictorialist style that promoted the virtues of Soviet citizenship and ideology through broad theatrical views, with dramatic staging and lighting effects and frequent retouching. As a result, many of these pictures seem to wave an unseen Russian flag: The scale is grand and measureless; the mounted cavalry bespeaks a timeless Russian continuity; the people are heroic and enduring. The drama is reinforced by the photos’ enlarged scale; what were modestly sized press pictures destined for pictorial news magazines like Ogonyuk here command museum walls as works of art.

A dark line of Soviet cavalry crossing the horizon in Dmitri Baltermants’s “Behind Enemy Lines, First Guards Cavalry Corps” (1941) punctuates the limitless Russian winter landscape, and in Arkady Shaykhet’s “The Offensive” (1944) Soviet tanks make their way through an expanse of drifts and blowing snow. This is the theater of troop movements, but even scenes of atrocity and death convey a sense of grandeur. Baltermants’s “Searching for the Loved Ones at Kerch, Crimea” (1942) — the title later altered to the more iconic “Grief” — documents a largely Jewish massacre in the Crimean city. With bodies strewn across the mud, the image is both stirring and squalid, as the figure of an elderly woman, a quintessential Mother Russia, picks her way through the corpses in search of kin.

Pictures like these concretize the scale and intensity of the Eastern Front, where after lengthy sieges and more than seven million Soviet military deaths, German armies were turned back in defeat. The long panoramic views combine with foreground details, the haunting figures on the horizon, and the stark black-and-white contrast that is both severe and lush at once: Documents of a terrible history become icons of wartime grandeur.

Victory images also exemplify war’s theater. Arkady Shaykhet’s “Firing on the Enemy: The Capture of Braunsberg” (1945) places the viewer just behind the line of attack, as tanks and soldiers enter the smoky, rubble-strewn space of the city square. Such images echo the stylistic strategies of 19th-century pictures like Eugene Delacroix’s heroic “Liberty Leading the People” (1832), where front-line fighters and fallen troops meet in a turbulent battle for Paris. Evgenii Khaldei’s famous photo “Red Flag Over the Reichstag” (1945) best exemplifies this approach. The picture is often compared with Joe Rosenthal’s “Raising the Flag on Iwo Jima” (1945), the iconic close-up of America’s victory in the Pacific. In Khaldei’s image, however, we have a vast expansive view. Two soldiers climb the parapets of the burning Reichstag to set up their banner. The point of view puts us at their level, among the forces that declare the Soviet victory. The picture was later doctored: A cloudy sky was added, mingling with the smoke rising from ruins as if the heavens, too, participated in the event. And, on a less heroic note, the soldier closest to the camera wears a single wristwatch; a second — looted — watch was erased. While the unruly behavior of the Russian liberators was dreaded by civilian populations, this slightly “cleansed” image aligning Soviet troops with symbolic Reichstag statues perched atop the ruins consolidates the moment of victory.

The Soviet heroics of these pictures may be clear, but their Jewishness is less so, and the exhibition presentation of the work as Jewish documents raises familiar — and vexing — questions about Jewish cultural participation in the Diaspora. Before the 1917 revolution, Jewish access to Russian art schools and other institutions of higher learning was limited. Photography, however, involved experiential training rather than academic study, and many young Jewish men and women apprenticed at photography studios to learn a trade, and many of the best-known press photographers in Russia were Jews. To make the case for a “Jewish eye,” however, is another matter. Shneer’s study, quoting historian Anna Shternshis, claims that “every person from that generation saw other people through the mark of Jewishness, even if they did not acknowledge it even to themselves.” An internalized Jewish identity may have been the case for many Soviet citizens, as was Jewish prominence in the profession, but to seek a Jewish outlook in these images assumes some kind of ethnic determinism, and from the evidence of these pictures, it is not so easily found. The Kerch massacre photographs report the atrocities of the German killing squads or Einsatzgruppen, but there is nothing to indicate that these are Jewish deaths — not the lines of naked victims or corpse-filled pits that the Nazis themselves eagerly documented. Even the pictures of Majdanek and Auschwitz, liberated by the Soviets in July 1944 and January 1945, and photographed respectively by Mikhail Trakhman and Vladimir Yudin, are not marked by recognizably Jewish content.

The one exception is drawn from the series of pictures of the Budapest Jewish ghetto, published in the Soviet Yiddish paper Unity (Eynikayt). Khaldei’s double portrait of a “Jewish Couple, Budapest , Hungary” (1945), confronts us with figures whose identity is marked by their armbands, not their faces or bodies.

As Jewish citizen-survivors, they greet us and define the context of the city street beyond. This, however, is one of the few decidedly Jewish pictures in the show. While Shneer’s study details the photographers’ links to Jewish community, neither it nor the show convincingly demonstrates a Jewish outlook for the images or their makers. We see a Great Patriotic War, but little Shoah; there are Jews behind the camera, but not noticeably so. The exhibition is thus somewhat anomalous for a museum dedicated to being “a living memorial of the Holocaust.” Still, the photographs are arresting and memorable. They testify to Jewish professional and diasporic accomplishment, and to Jewish participation in Soviet culture. And they offer us a stunning view of a devastating history.

Carol Zemel is professor of art history and visual culture at York University, in Toronto.