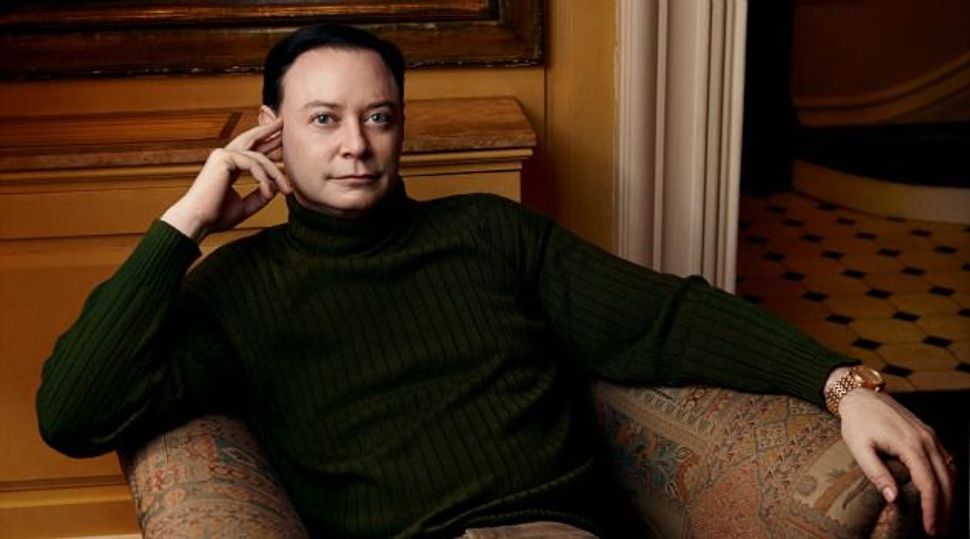 Solomon-Like Pose: The author Andrew Solomon was born into a Jewish family that struggled to accept his sexual identity. Image by Annie Leibovitz

● Far From the Tree: Parents, Children, and the Search for Identity
By Andrew Solomon
Scribner, 976 pages, $37.50

In his ambitious new study of the relationships between exceptional or unusually challenging children and their parents, Andrew Solomon confesses, informs and enlightens with the same capacious sweep that distinguished his last work, “The Noonday Demon: An Atlas of Depression.” Solomon’s range encompasses politics, culture and psychology, and the intricate intersection of the three.

If the catalyst for “The Noonday Demon” was his personal struggle with incapacitating depression, the spur for “Far From the Tree” was his experience growing up in the 1960s and ’70s in an affluent and assimilated Jewish family, the gay son of parents who loved and cherished him but wanted him to be heterosexual like them.

At the outset of “Far From the Tree,” Solomon differentiates between the vertical identity that is passed down to children from parents via genetics and familial norms (ethnicity, language and shared physical, intellectual and emotional traits are examples) and horizontal identity, which refers to traits that are foreign to the family and unique to the child, and often propel identification with a community outside the family.

Solomon links his struggle to accept himself as gay with his mother’s resistance to the emerging signs of his homosexuality and her efforts to reorient him.

Over time he came to understand that she felt extreme shame about her vertical identity of Jewishness. Her father kept his religion secret to protect his high-level job in a company that didn’t hire Jews, and when she was a young woman, her fiancé broke off his engagement to her when his family threatened to disown him if he married a Jew.

Undoubtedly, manifest vertical identities present their own problems in families, but that is not the subject of this book. Instead, choosing some of the most extreme examples of horizontal identity, Solomon sets out “to explore the spectrum of difference… to show that a child’s traumatic origin (rape) or traumatic acts (crime) can have surprising parallels to the condition of his mind (autistic, schizophrenic, prodigious) or of his body (dwarfism, deafness).”

The 10 chapters that follow — Deaf, Dwarfs, Down Syndrome, Autism, Schizophrenia, Disability, Prodigies, Rape, Crime and Transgender — are bookended by an opening chapter, “Son,” and a closing chapter, “Father,” which span Solomon’s personal journey that culminates in his decision to become a father.

“Far From the Tree” offers a breadth of ideas and a wealth of details. Each chapter is a self-contained and comprehensive survey of its subject, providing historical background and sociopolitical context that alternate with vivid and poignant excerpts from Solomon’s home visits and interviews, interlaced with the author’s reflections and observations.

Examples abound of parents’ dedication and determination to secure the best possible existence for their afflicted children, and the ferocity and power of parental love — the template for all other forms of love — are indisputable. Another of Solomon’s premises is the growth-enhancing potential of adversity that is confronted and dealt with.

He illustrates this in the life stories of children born with handicapping situations, but more particularly in the accounts of parents who raise children whom they never would have imagined or wished for but who come to enlarge their parents’ horizons in unanticipated ways. “It is not suffering that is precious,” Solomon writes, “but the concentric pearlescence with which we contain it” — a Solomonic nugget that captures the writer’s capacity to be simultaneously gnomic and expansive, literary and scientific.

The subject of identity, which informs the subtitle of “Far From the Tree,” is a much more complex topic than either the specific conditions included or the relatively straightforward and ennobling messages about parental love, and the transformative power of struggle with unimaginable and seemingly unendurable challenges. If I have a quibble with Solomon’s book, it is that the subject of identity remains too contextual and even amorphous at times.

Solomon does not provide a working definition of identity, nor does he demarcate it from the process of identification that seems to be an essential ingredient in parents’ alliance with children who are very different from them. Parental love, as Solomon notes, is a paradoxical amalgam of self-love and love for another who is different from oneself; related to this, although not equivalent, is the “close to the tree” child who reflects sameness with the parent at one end of the spectrum and all the possibilities and varieties of difference at the other end.

Identity is a fluid concept, and it is not always clear whose identity is at stake, the child’s or the parent’s. For some of the conditions examined — deafness, dwarfism and transgenderism — there are vibrant communities that reinforce and embrace horizontal identity. The question of what constitutes identity and what constitutes illness underlies many of the situations represented in “Far From the Tree.”

If the psychological sine qua non of identity is self-awareness with both cognitive and emotional constituents, what can be said about the identity of schizophrenics, whose sense of self and reality is often deluded, or severely cognitively disabled people, whose discrimination is rudimentary? Another complication is the evidence that many higher functioning Down syndrome and autistic people who were exposed to early and intensive intervention may ultimately come to feel less content than their lower-functioning peers; as their development is stimulated, their awareness of their deficits and differences compared with “typical” people also becomes sharper.

In Solomon’s investigation of varying examples of horizontal identity, the impairment of children with severe disabilities would appear to preclude the possibility of their achieving an organizing identity, and then it becomes clear that it is the identity of the parents of such children that is the real subject. The same is true in a different way for children conceived in rape (who may actually never know their origin) and children who commit crimes, whose parents are agonizingly tested in their parental identity.

Solomon’s inclusion of prodigies in his compendium of exceptional parent-child situations seems counterintuitive, despite the author’s rationale. Certainly, these near-genius children can present outsized challenges, but it is difficult to view them in terms of adversity, a characteristic of all the other conditions studied. In addition, the pleasure component — the recognition and celebrity that such children often achieve, and the gratification that affords the parents — seems too obvious. This leads back again to the conundrum of parental love, the fundamental imbrication of narcissistic or self-love and love for the other, the interweaving of sameness and difference.

The mother of one of the two Columbine perpetrators, interviewed for the crime chapter, reflects, “I know it would have been better for the world if Dylan had never been born. But I believe it would not have been better for me.” Here, we are faced with the essential intertwining, in identity formation as well as other aspects, of the parent-child relationship: Parents shape the identity of their children, but their own experience and identity as parents are defined in turn by their particular children.

Dinah M. Mendes is a clinical psychologist and psychoanalyst in New York City.