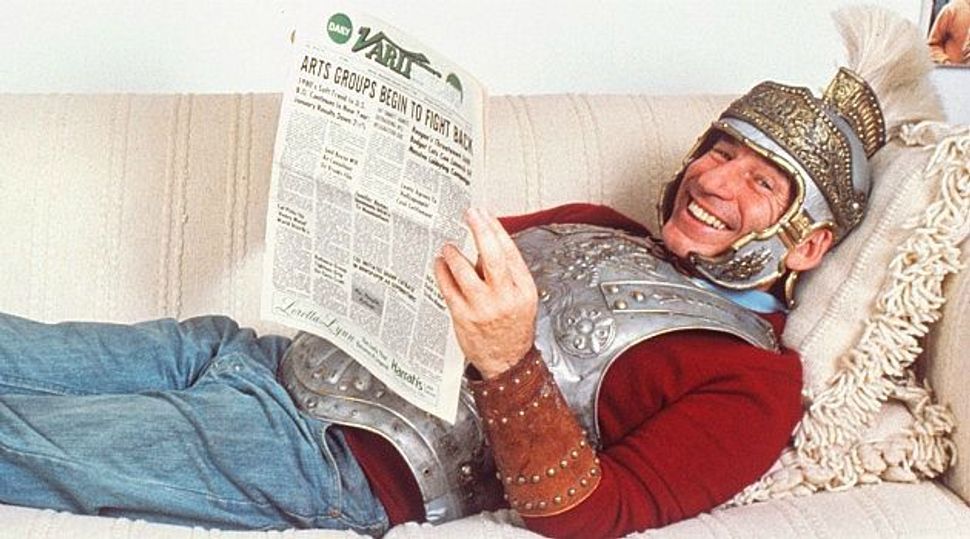 Showman of Showmen: Mel Brooks is the subject of a new PBS American Masters documentary and will receive a Lifetime Achievement Award from the American Film Institute. Image by Courtesy of Pamela Barkentin Blackwell

Ironically, it was Mel Brooks who asked the first question: “So, how long have you been working for the Jewish Daily Forward?”

Then he wondered aloud how I spell my name, and he graded my response. “You got all the letters right,” he said, and laughed when I ask for extra credit for getting them in the proper order: “That’s funny.”

Brooks, 86, is one of only 11 people to have won the grand slam of show business — an Emmy, a Grammy, an Oscar and a Tony. But despite the accolades, the fame and the riches, he still seems to be that little boy from Brooklyn, just as curious about you as you are about him.

On May 20, the Public Broadcasting Service will premiere “Mel Brooks: Make a Noise,” an extraordinary American Masters special that traces his remarkable career. Less than three weeks later, on June 6, the American Film Institute will honor Brooks with its Lifetime Achievement Award. Still, his conversation with the Forward seemed less an opportunity to promote than to reminisce.

“It’s like a big deal, second only to the Oscars,” he said of the AFI honor before quickly moving on to discuss his remembrances of things past: his mother and her friends drinking coffee from yahrzeit glasses “because coffee was always in a yahrzeit glass, never in a cup. Ever. They used to have these jelly jars. The jelly jar was for tea, and yahrzeit glasses were for coffee.”

“We lived on the fifth floor in the back of a tenement. We were incredibly poor,” he said.

Brooks recalled how, growing up, “I was never really interested in the religious aspect of being a Jew. But Rabbi Nachman cured me of that.”

Nachman founded the Breslov Hasidic movement, and Brooks, a voracious reader, says he studied and was moved by his philosophical works. “He wrote a lot of stuff,” Brooks said. “He said talk to God like you talk to a friend. Until I read that, I’d always thought of God as a stern “burn you in fires and fury” tough guy. But Nachman’s thinking was so different, I became a little more religious.”

I asked Brooks if he gets bored answering the same questions over and over again. “Yeah, I do,” he said. “But I make believe I’m not. I’m really a good actor, and I say, ‘That’s an interesting question,’ and answer it. ‘What was your favorite movie?’ ‘How did you get into show business?’ You know.”

But now Brooks does not seem to be acting. He delves into the topic of religion with apparent enthusiasm, gaining vigor as he recalls his grandmother, “who was terribly religious,” putting a handkerchief on her head as she lit Sabbath candles and recited the blessings: “I used to ask my brother, ‘Is this the real McCoy, or is she faking it?’ It was real.”

Passover seems to have been his favorite holiday. It was celebrated at his grandfather Abraham’s house; “Everyone called him Shloimy,” Brooks recalled. “I don’t know why. It should have been Avraham. He would conduct the service. It would be three and a half hours.”

But, he says, Uncle Leon, who was the youngest of his mother’s brothers and therefore placed closest to the children’s end of the table, made the proceedings easier: “Leon saved the day. He’d say, ‘It’s a fly to center field,” and he’d do the whole thing like it was a Dodger game. He would say something like, ‘Mel Ott lifts his legs, swings and it’s going, going, gone’ every time my grandfather said something.”

These days, Brooks attends Seders hosted by Ron and Sheila Clark, respectively a co-writer on three Brooks films and his wife. “You get a lot of gefilte fish, but not too much reading,” he said.

The second night, he and a group of friends often go to the nursing home where Sid Caesar resides: “He can’t feed himself, and he goes from his bed to a wheelchair, but we try to have a Seder on the second night. He may not get it, but we try.”

Told he sounds far more Jewish than he lets on, Brooks said: “I like being Jewish. It’s strange. I wouldn’t be anything but. But it still doesn’t mean I ever would have two sets of dishes.”

The mention of Caesar, of course, prompted discussion of Brooks’s career: Borscht Belt tummler, stand-up comic, writer of Caesar’s “Admiral Broadway Review,” “Your Show of Shows” and “Caesar’s Hour.” He was teamed with Neil and Danny Simon, Woody Allen, Carl Reiner and Larry Gelbart, among others, to create the most influential sketch comedy shows in TV history.

He went on to become the 2000 Year Old Man, a character that he and Reiner created, and, of course, to write, direct and star in critically and commercially successful films such as “Blazing Saddles,” “The Producers” and “Young Frankenstein.”

The last two were turned into successful Broadway productions, as has been well documented. Less well known is when Brooks first became aware of his comic skills: “I knew it as an infant in the crib. People would peer down and laugh. I said I could do three shows a day.”

The true turning point came at a summer camp in New Jersey for underprivileged kids, funded by Eddie Cantor. At one of the Friday night shows there, Brooks did an imitation of a counselor.

“I brought the house down,” he said, “and I understood then that if you take comedy from life instead of repeating Henny Youngman jokes it works even better. He says he sealed his show business aspirations when he attended his first Broadway performance, with his uncle: “My Uncle Joe was a cab driver. If a cab came down the street without a driver, that was Uncle Joe. He was about 3 feet tall.”

When Uncle Joe was about to call it quits for the night, he’d cruise around Broadway and give free rides back to Brooklyn to theater doormen. Occasionally they would pay him back with free tickets.

In the early 30s, Brooks and his uncle went to see “Anything Goes,” starring Ethel Merman. “We were up in the balcony, and I thought she was still too loud. But that’s where I decided I’m not going to go into the garment center like everyone else.”

Brooks is well known for his incredibly fertile mind, with funny lines coming seemingly from no where. At the end of the PBS special, he complained: “If this program was called ‘Dutch Masters,’ I’d have a box of cigars. But I had to be foolish and settle for ‘American Masters.’ No money in it. No cigars. No nothing.”

I pointed out to Brooks that his references to Merman and Cantor might be obscure for today’s audience. “You gotta be over 60 to understand Dutch Masters,” he said. Still, he believes that if he were to start today, “I’d still be funny and famous.”

“I’d have to change my game. I do parody and I do satire, and I would have to satirize what’s around today. I would have to start with ‘Avatar’ and stuff like that, make fun of futuristic adventure stories.”

“My crowd had to know Westerns. They had to know what scraping beans around a tin plate would produce.”

I asked if it is easy being Mel Brooks.

“I think it is,” he said. “I get into a lot of places for nothing. Sometimes it’s a little difficult when a few hundred people want to take a lot of pictures. But I don’t avoid it. I don’t try to sneak in the back door of a theater if people are waiting to see me.”

But is there a “Pagliacci” element about him? Was he the clown crying on the inside?

“No, never,” he said emphatically. “I’m sad when real things happen. When I lost my wife [Anne Bancroft], I was desperately unhappy.

“I was very lucky. I chose the path, and I had the three thirds that make one whole.”

He explained: “One third is the neurotic need for attention. That’s the first third. The second third is God-given talent, the ability to sing on key, to move your legs well and dance well, to machine gun a joke with the right rhythm. The third is unstoppable diligence and work. When I do a movie, it’s at least six rewrites of the script.”

Comedy, he claimed, is a way people work their way up the social ladder: “We [Jews] were replaced by blacks, and 40 years from now they’ll be replaced, probably by comics from Thailand. It happens in waves. Every immigrant society, all downtrodden and poor people want to make a living shouting their own praises.”

Towards the end of our interview, Brooks told me he recently had dinner with “two lovely Dutch ladies” who presented him with a plastic-encased chestnut from a tree that stands outside the home where Anne Frank hid in the attic. We took a few minutes trying, translating the Dutch words on the casing.

“I keep it on my desk,” he said. “Is there anything sweeter and nicer than that little girl still having faith in humanity?”