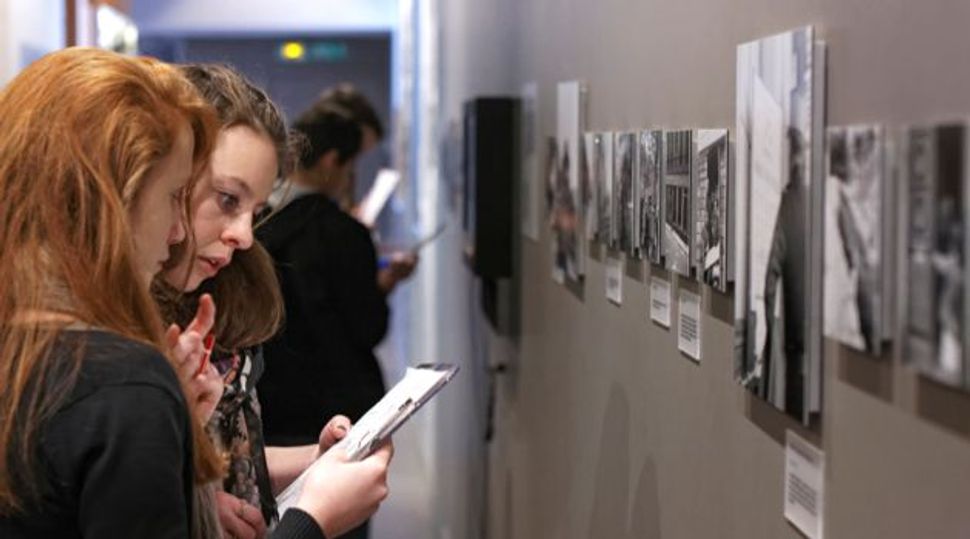 Learning from Lyon: Visitors read about the resistance movement. Image by Pierre Verrier

A new facility in Lyon, France tells the story of the local — and largely unsung — heroes of World War II.

The Centre de l’Histoire de la Résistance et de la Déportation — Center for the History of the Resistance and Deportation, or CHRD — aims to educate visitors about the role of the resistance movement in aiding Jews and others during the Holocaust.

The CHRD is a striking new addition to the Lyon museum scene, and it is also the latest in a string of European museums meant to highlight World War II resistors. Many of these individuals — who, like Holocaust survivors, are growing older in age and fewer in number — want their stories preserved and collected so that future students of World War II and the Holocaust will have more perspectives to learn from.

The CHRD began in 1992 as an informal collection of personal diaries and photographs from resistance members, who held on to these items for posterity. In 2011, the facility closed for a year for renovations; last year it reopened as a full-fledged modern museum that documents the experiences of people living in the Lyon area during the war years. It includes historical information about Lyon, France and the Vichy government as well as the particular struggles of the Jews.

There is also an educational center full of books and study materials related to the period. Sixty thousand people pass through the CHRD every year, and the majority are students. Throughout the year, the CHRD engages the local community by hosting panel discussions, academic conferences and lectures about genocide in other parts of the world.

The museum is located on the site of the former office of Klaus Barbie, the high-ranking Nazi official who was assigned to the Lyon region during World War II and who was called the “Butcher of Lyon” for the particularly cruel forms of torture he used against Jews, Communists and Resistance members. One of the people Barbie arrested was Jean Moulin, the most iconic leader of the French Resistance movement. Moulin was reportedly beaten to death by Barbie for refusing to give information that would compromise the safety of other Resistance activists. These two men feature prominently in exhibits at CHRD: the hero and the villain who help the story come to life.

It was Barbie’s televised trial in 1987 that inspired the then-mayor of Lyon, Michel Noir, to decide that the city needed a museum — in Lyon, funded by Lyon — to honor its Resistance roots. Today, the CHRD’s most popular exhibit is its original video footage of the Barbie trial. Barbie was convicted of war crimes and died several years later in a Lyon prison. In the eerie footage, dozens of former prisoners testify about the horrific torture they endured while looking straight at their former abuser, whose expression does not change.

The museum is organized into six chronological exhibits, beginning with the effects of German occupation on France, moving to the persecution and deportation of the Jews, then on to the Resistance movements and the actions of heroes like Moulin, with a coda about the liberation of Lyon in 1944. The exhibits (currently in French and English, though museum planners intend to add German, Spanish and Italian by next year) include recorded testimonies from people who lived in the Lyon area during the Vichy years. For Isabelle Doré-Rivé, the CHRD’s curator, it was important to record as many of these testimonies as possible to give a broad and comprehensive perspective. “We are responsible for transmitting these facts,” she said. “There is no question of embellishing a voice or beautifying a text.”

Some of the most mundane objects in the museum are also the most powerful, such as a pair of glasses belonging to a jailed resistor that were broken by an SS officer and repaired by a fellow deportee or the letters written by Jews that were thrown from a train car bound for a concentration camp. These notes were saved and preserved by French families who donated them anonymously to CHRD. The museum gives special credit to Jewish leaders of the Resistance, like Marc Bloch, a prominent history professor and activist who was murdered by the Gestapo in 1944.

Context was key for Doré-Rivé and her team, who also wanted the museum to show how France’s third-largest city was a unique place to be during the Vichy years. The city’s proximity to neutral Switzerland as well as its convenient location between two rivers made it a logical point for the Resistance to organize. Many Jews from elsewhere in France were taken to Lyon and then hidden in homes throughout the French countryside. “People wanted to know more about Lyon and why it was ‘the capital of the Resistance,’” explained Guillet, referring to a well-known Charles de Gaulle quote. Following the Barbie trial and conviction, Lyon began to put up plaques, memorials and other public information about Resistance members and their activity, including a large list of names of individuals who were killed because of their involvement.

Two other European museums tell similar stories of World War II resistors. Copenhagen’s Frihedsmuseet (Museum of Danish Resistance) mostly focuses on the story of the single night when almost the entire Jewish population of Denmark was evacuated by water to Malmo, Sweden. Amsterdam’s Verzetsmuseum (Museum of Dutch Resistance) tackles the subject through clever architecture and design — the outer shell of the museum lets visitors experience what it was like to be pro-German or neutral, while the inner section gives a sense of what life was like for both Jews and members of underground movements.

While both Denmark and Holland, along with many other European countries, have Jewish museums, museums specifically dedicated to the work of Resistance movements and conscientious objectors are a way that these nations can re-envision their histories. Rather than focusing only on the tragedies of the Holocaust, resistance museums show that many ordinary citizens did not stand idly by during the German occupation.

“I am determined to hang on as long as possible,” Jean Moulin told his fellow resistors shortly before his arrest and death in 1943. “My task is becoming more and more delicate, while the difficulties increase constantly.” The existence of the CHRD ensures that the story of Jean Moulin — and of thousands of named and unnamed people like him — will not disappear when they are gone. From Copenhagen to Amsterdam to Lyon, there are ever more items added to the list of things, as the slogan goes, to never forget.

Lilit Marcus is a freelance writer based in New York. Her first book, “Save the Assistants: A Guide for Surviving and Thriving in the Workplace,” was published by Hyperion.