Malcolm X and the Jews 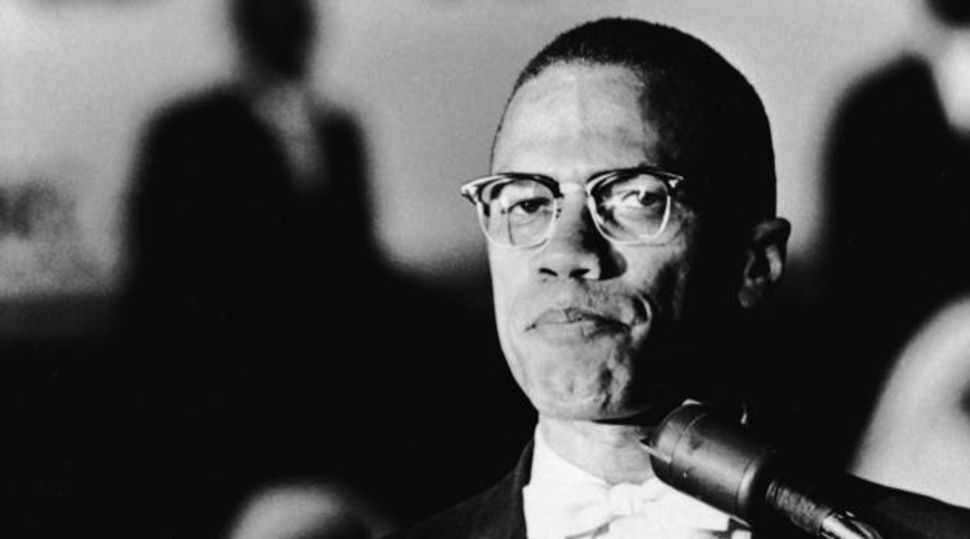 In 1963: Malcolm X made controversial statements about Jewish leaders and organizations. Image by Getty Images

Joseph Hoffman, head of a gang of schnorrers, was sentenced to six months in prison after it was discovered that he taught and organized a group of allegedly crippled panhandlers to beg for money, from which he received a cut, on the streets of New York City. One of his former charges, Joseph Rosenbaum, testified against him in court, claiming that Hoffman taught his “students” to walk with limps and to wear fake bandages. Rosenbaum, whose head was bandaged, was caught by a detective outside an uptown hotel. He initially told the cops that he was a striking painter who had been beaten up by a scab and was trying to get money to feed his family. But when the detective yanked off his bandage, there was no wound to be found. Rosenbaum was arrested and admitted the whole scheme, explaining Hoffman’s “cripple factory” to the police.

It is estimated that the Nazis arrested at least 6,000 Jews in Vienna recently. About 1,000 of these arrestees, it is thought, were sent by train to Dachau, Germany. It is suspected that a smaller group has been shipped to a prison near the Czechoslovakian border, while the largest group is being held in Viennese public schools that have been transformed into prisons. Vienna’s most famous Jew, the 82-year-old professor Sigmund Freud, has left the city for London and is thought to be on his way to New York. Freud is traveling with his entire library and collection of manuscripts, a sign that he does not plan to return to Vienna. Announcing his departure, the Nazi newspaper Volkische Beobachter wrote, “The old man who founded a school for pornography and ugliness has gone away.”

When Malcolm X was asked whether the Black Muslims are anti-Semitic, he replied: “Many Jews have guilt feelings when people talk about ‘exploitation.’ This is because they know that they control 90 percent of the businesses in black communities, from the Atlantic to the Pacific. And they benefit more from black buying power than blacks do from other parts of the white community. So they feel guilty about it.” He also complained that Jews can be found on the boards of such organizations as the National Association for the Advancement of Colored People, but, he continued, “the same Jews won’t let you become president of B’nai B’rith, or any of their other organizations.” Although Malcolm X denied that his organization is anti-Semitic, his comments left many wondering if that is genuinely true.

Malcolm X and the Jews