Reclaiming Jewish Classics With a Trip To the Farmers’ Market 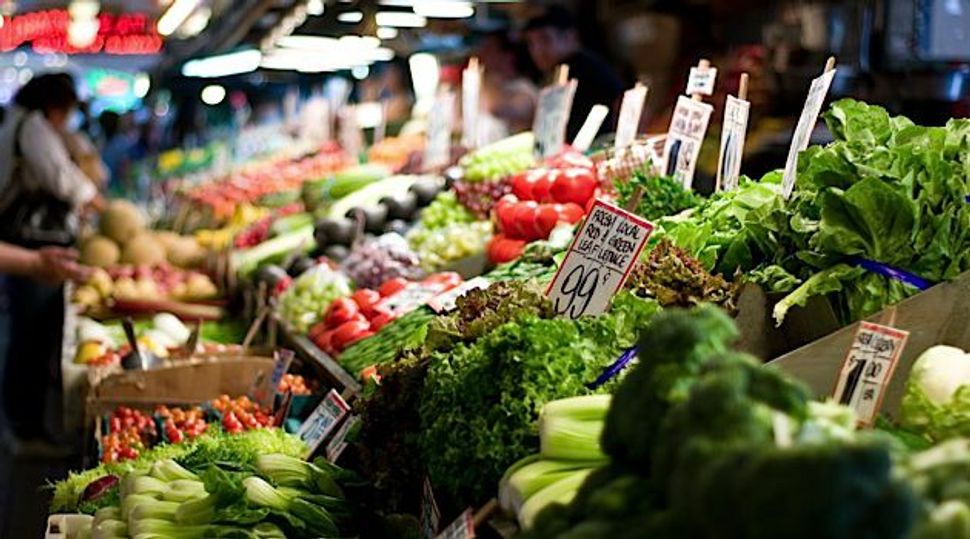 Help from the Farm: Jewish cuisine revived with the help of seasonal produce can be ?downright redemptive.? Image by Flickr/Robert S. Donovan

Wandering through the farmers market with a reusable tote bag and a beatific smile has become the ultimate in foodie clichés, and for good reason. There is little more satisfying to a home cook than tipping forth the day’s haul onto the kitchen counter — a pound of coral-colored rhubarb, say, a silky pile of zucchini blossoms or a gorgeously blistered heirloom tomato — and falling into a frenzy of improvisational, from-the-hip cooking.

I have spent many happy weekends exactly this way. And yet, as someone preoccupied with Jewish cuisine, I find the farmers market and CSA box equally motivating as a pathway back to traditional Jewish dishes.

In 2011, writer Josh Ozersky proclaimed in Time magazine that “Jewish food is awful” — an “aggressively bland” assault of “dry flavorless brisket” and “dense lokshen kugels, sweet noodle casseroles as unappetizing as Christmas fruitcake.” Once or twice a year, he writes, we suffer through these nostalgic Eastern European shtetl foods with a grim determination to keep them alive rather than any sense of real pleasure. “I don’t claim to have an answer for this problem, which is one of the most baffling in all of American culinary history,” he writes. Well, Mr. Ozersky, I do.

I disagree with Ozersky that Jewish food is bad by definition. In fact, I find it presumptuous to label any time-tested cuisine inherently bad. What is accurate, however, is that much of traditional Jewish cooking has lost its way.

Take sorrel. The lemony-flavored green, a spinach look-alike, serves as the base for a largely forgotten, and delicious, soup called schav. Regrettably, the schav one tends to encounter today would make Ozersky shudder — me, too. Industrially produced, confined to a glass bottle and sitting for unspeakable stretches on the supermarket shelf, it loses all connection to its inherent tastiness, becoming an uninspired facsimile of its original form.

But not long ago, chilled schav was a desirable standard on Ashkenazi tables, a tangy and refreshing antidote to summer’s muggiest months. As Jewish cookbook author Arthur Schwartz recalls on his website, The Food Maven, the schav his grandmother made was “from scratch, which meant ordering enormous bunches of large-leafed sorrel — what she called ‘sour grass’ — from her fruit and vegetable man.” Stirred with cool sour cream and garnished with crisp chopped vegetables, it was an integral part of her seasonal repertoire.

On a recent walk through the farmers’ market, I spotted several bunches of sorrel resting amid more commonly known greens. Snagging a couple of bundles, I softened it, along with some onions, in butter, then simmered it into an Old World soup that tasted remarkably fresh and vital.

Walking past the market tables, the beginnings of countless other Jewish dishes beckon. After all, many of these dishes were once inherently seasonal, developed and canonized at a time when fresh produce was available only for a few short months each year.

Continuing on the soup front, the ruby-colored sour cherries that appear in early summer could be turned into chilled Hungarian cherry soup. Crisp green cucumbers — not to mention tomatoes, beets and turnips — beg to be pickled, and sides of sustainable salmon can be rubbed with salt and transformed into tender lox. Heavy heads of cabbage can be softened and stuffed with a sweet and tangy beef filling for holishkes. The makings of tzimmes — carrots, sweet potatoes, apricots and honey — are available in sweet abundance during the late summer. Even the lokshen kugels Ozersky so despises can be bolstered with grassy eggs and rich farmer or ricotta cheese from the market.

Like the ones near me in New York City, many farmers markets have recently begun to embrace locally grown grains, making it increasingly possible to find nutty-scented kasha (toasted buckwheat) to use in kasha varnishkes. Ozersky writes that there is “nothing but despair” at the bottom of a bowl of kasha varnishkes, which evidently means he has never tried to make his own. Cooked in broth until fluffy and fragrant, then stirred with bowtie noodles, slowly caramelized onions and a generous amount of oil or schmaltz, the traditional grain makes eating an undeniably joyous experience.

I have no interest in keeping alive traditional Jewish foods for nostalgia’s sake alone, nor do I mean to suggest that one eat these dishes at the expense of experimenting with new flavors. But as nouveau Jewish restaurants like Mile End in Brooklyn, Wise Sons in San Francisco, and Citron and Rose in Philadelphia, among others, have proved, our ethnically Jewish recipe box is worthy of our renewed attention. (In a 2012 article, also in Time, Ozersky refined his original argument by calling out Mile End for “carving out a relevant, non-nostalgic approach to Jewish cooking.”)

Many of these restaurants focus primarily on meat-centered dishes, leaving a lot of room open to explore on the produce front. Now it’s the home cook’s turn to discover that, when craving the briny, rich and, yes, fresh flavors of fully realized Jewish cuisine, turning to seasonal produce can be downright redemptive. 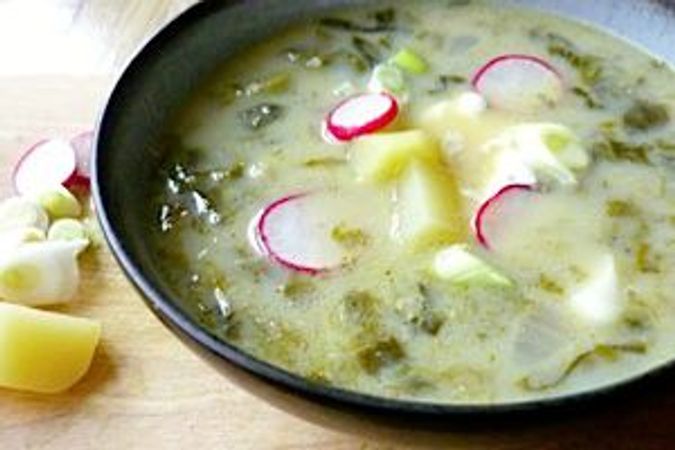 Jewish Vichyssoise: The lemony-flavored sorrel, a spinach look-alike, serves as the base for a largely forgotten, and delicious, soup called schav. Image by Leah Koenig

Nearly all the ingredients in this traditional Eastern European soup — from the sorrel, onions, eggs and butter that serve as the base, to the potatoes, radishes and cucumber that garnish it — can be sourced from the farmers market.

1) Bring a small saucepan filled with water to a boil over high heat; add potato and simmer, stirring occasionally, until tender, 10–15 minutes. Drain well, and set aside to cool.

2) Meanwhile, melt the butter in a medium pot set over medium heat until foaming; add the onions and cook, stirring occasionally, until soft and translucent, 5–7 minutes. Add sorrel and continue cooking, tossing with tongs, until wilted, 2–3 minutes. Add water, salt and sugar; raise heat to medium high and bring to a simmer, then lower heat to low and cook, stirring occasionally, for 15 minutes.

3) Remove soup from the heat, and stir in the lemon juice; let cool slightly. In a medium bowl, whisk together the egg yolks with about one-quarter cup of the warm soup, then stir the mixture into the soup; taste and season with additional salt and lemon juice if desired. Set pan back over low heat, and bring to a very gentle simmer (do not re-boil); remove pan from heat.

4) Divide cooked potato pieces between bowls, and ladle soup over them. Top with desired garnishes. To serve cold, let soup cool to room temperature, then refrigerate until chilled.

Leah Koenig writes a monthly column on food. Contact her at [email protected]

Reclaiming Jewish Classics With a Trip To the Farmers’ Market