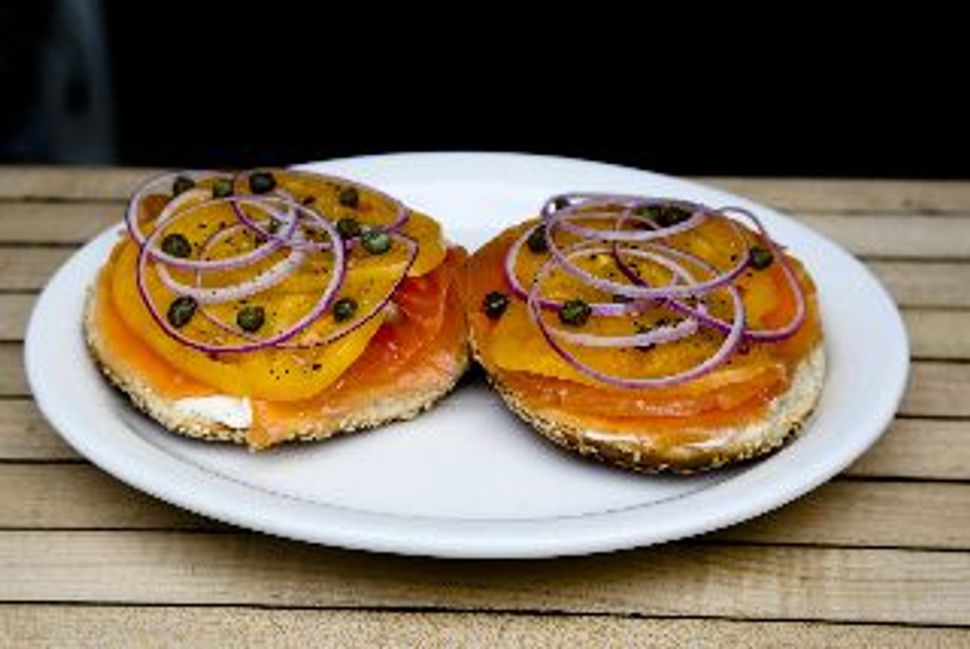 There are few Jewish foods in America as iconic as the bagel and lox. We eat it at Sunday brunch, after funerals, for Yom Kippur break fast and at brises. It is a staple food of Jewish lifecycles and traditions.

Rarely, though, is your bagel with shmear actually accompanied by lox. What, you say? Then what have I been eating all this time? In most cases, the answer is smoked salmon.

Lox, which originally comes from the German word for salmon, lachs, and the Yiddish word laks, is actually a salt-cured fish, a method that was used for preserving fish in Northern and Eastern Europe.

According to cookbook author and culinary historian Gil Marks, lox in Europe originally referred to wet brined salmon. The fish was soaked in a salt water solution to preserve it. Nova, which tastes less salty, was originally lightly brined and then cold smoked at 70 degrees.

When Eastern European Jews began immigrating to the United States in waves at the end of the 19th century, they were more accustomed to pickled herring than lox. But herring in their new home was expensive, so many poor immigrants turned to the cheaper and more common cured salmon, says Marks. Around the same time, nova came to refer to cured or smoked fish from Nova Scotia and, more broadly, Atlantic salmon, while cured salmon from the West Coast was referred to as lox.

The bagel-and-cream-cheese combo was introduced into the lox equation as an alternative to the popular (and nonkosher) brunch dish Eggs Benedict sometime in the first half of the 20th century (varying accounts put the crucial, tasty moment in the 1930s, ’40s or even ’50s). Cookbook author Joan Nathan, in an article for Slate, says the popularity was also “spurred on most probably by Joseph Kraft’s advertising blitz for Philadelphia Cream Cheese. It soon became an American alternative to the other Sunday trilogy of bacon, eggs, and toast.”

The dish was introduced to the wider public of New York City in 1951, with the Broadway comedic production of “Bagels and Yox.” The show’s title food was so unfamiliar to non-Jewish audience members that bagels were handed out as a snack during intermission.

Sixty years later, smoked salmon is available at almost every grocery store and dairy deli across America, though the fish on our bagels has changed. What was once a cheap alternative to herring is now an expensive comestible, and the smoking technique so commonly used today masks the rich and distinct flavor of the salmon.

Some home cooks, and chefs like Noah Bernamoff, owner of Mile End Deli in Brooklyn, have turned to a Scandinavian interpretation that honors the flavors of the fish and can be easily prepared at home. Gravlax, literally meaning “buried fish,” is a salt, sugar and spice cured filet of salmon. (Poor sailors in Northern Europe who could not afford barrels to preserve their fish in would bury their salmon, covered in salt and wrapped in birch bark, to preserve it, according to Harold McGee in “On Food and Cooking.”)

“It should taste like salmon — fresh vibrant salmon that’s been out of the water for not very long, cured just enough so you’re not eating sushi,” says Bernamoff, whose restaurant prepares gravlax weekly and serves it in a bagel sandwich called “The Beauty.”

“The basic ratio is three parts salt, to two parts sugar, to one part pepper. Then there’s a lot of variation about how to pack the fish, how much weight to put on, how long.” Bernamoff and his team add juniper berries and dill to the mix, the dill serving “probably [as] a domestic replacement for the original pine needles, which are a delightful alternative,” writes McGee.

“Everything you add to it is meant to add a backbone,” to enhance the flavor of the fish. “Juniper adds earthiness, sugar and salt for chemical reasons, pepper and dill are meant to be super subtle,” explains Bernamoff.

The silky and delicious cured salmon is the perfect complement to a bagel and cream cheese or pumpernickel bread, served with chopped red onions and capers. You can also add it to scrambled eggs with cream cheese at the last moment for a “Goldie Lox” brunch dish or serve it along side dressed greens as a light lunch.

2) Put the fish, skin side down on the rack

3) In a bowl mix three parts salt, two parts sugar, one part pepper corns and one part juniper berries together

5) Cover the fish with dill

6) Place in the refrigerator (if you can stand the smell, do not cover) and leave for 24 hours

7) Cover the fish again with a thin layer of the salt/sugar mix.

8) Repeat this process for four days if your salmon is thick. If you use sockeye salmon, or another thin variety, do this only twice. (Most recipes call for heavy weights to be placed on top of the salmon Bernamoff says “this method takes longer but results in a much better product.)