Is It Last Dance for Kaveret, the ‘Israeli ABBA’? 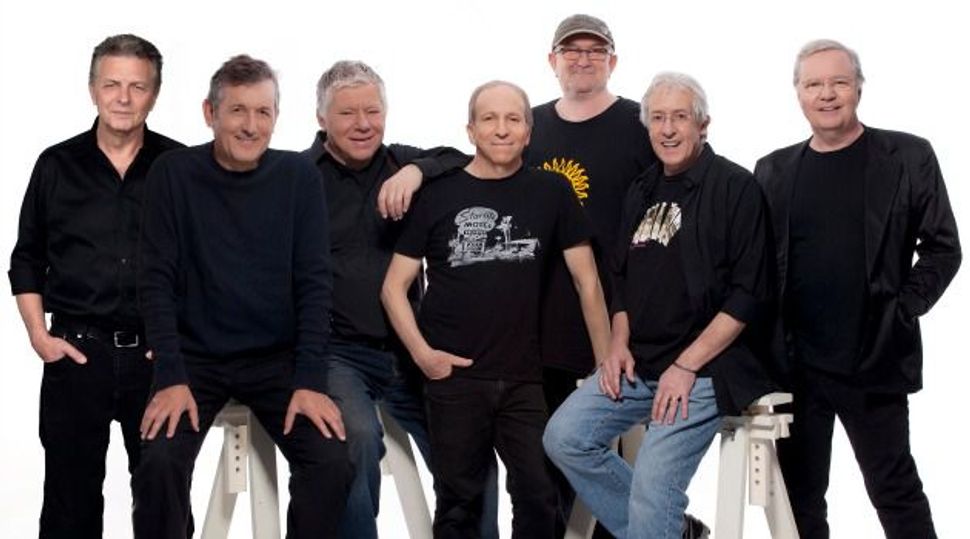 Recalling Their Waterloo: In 1974, Kaveret represented Israel in the Eurovision Song Contest. Alas, they lost to ABBA. Image by Ilan Besor

Fifty years ago, Danny Sanderson was a freshman at the High School of Music & Art, in New York City’s Hamilton Heights. He was new to Manhattan, having grown up in a Tel Aviv suburb, born to parents that had made aliyah from the States in 1948. His father had recently assumed a post as El Al’s New York representative, and Sanderson spent his time tinkering with his guitar, his mind reeling at the musical possibilities provided by his school, by New York City, by America in the 1960s.

Little Israel, with its folk songs, must have seemed a million miles away. But just a decade later, that guitar tinkering would form the basis for Kaveret — easily Israel’s most successful pop-rock band ever. This summer, 40 years after its founding, Kaveret are back for a series of concerts that its members say will be the band’s last.

Kaveret’s first performances were in the summer of 1973, and the band broke up three years later. While together, the group released three records of which hundreds of thousands of copies were sold (huge for a nation then barely 3 million strong). The band’s brand of pop rock — a sort of Beatles/Beach Boys amalgam but more progressive, and funnier — became the standard-bearer for Israeli music.

New immigrants cut their Hebrew teeth on Kaveret’s lyrics, and generations of kids were brought up on songs fun enough for them to love as much as their parents did. Kaveret’s success was, in no small part, due to Sanderson’s musical genius and guitar-playing skill, and to his luck in rallying some wildly talented band members and whose subsequent considerable successes in their own solo careers have made Kaveret something of a super-group in reverse: vocalists Gidi Gov and Efraim Shamir, guitarist Yitzhak Klepter, Alon Oleartchik on bass, keyboardist Yoni Rechter and drummer Meir “Poogy” Fenigstein, who is the only band member to have abandoned the music scene. He produces the annual Israel Film Festivals in New York and Los Angeles. His comical alter-ego “Poogy” served as the band’s mascot — and as its moniker for performances abroad.

When three anniversary concerts in Jerusalem’s massive Sultan’s Pool venue were announced in March, tickets sold out within hours (additional performances in Tel Aviv have since been added, and have sold out, as well). But Kaveret’s performances the first time around caused some bewilderment. Israeli music hadn’t yet caught on to rock ’n’ roll. The airwaves were still playing songs in the tradition of the 1948-era entertainment troupes — so called Eretz Israel songs, accordion-infused and often based on the old Russian folk songs that pre-state pioneers brought from the Old Country. Every Israel Defense Forces corps worth its mettle had its own entertainment troupe, made up of musically talented soldiers serving their mandatory time in the IDF. Their job was chiefly to entertain soldiers, but with the IDF being such an important fixture in the young state, they played to a national audience.

When Sanderson returned to Israel in 1968 to enlist in the army, he joined one of those troupes — The Nachal Band. He was determined to mix the old with the new, he told an audience in Jerusalem this past May. “I’m an eclectic pluralist and I play the music I like, no matter where it’s from,” he said. “So I would mix all the Israeli music I grew up listening to with the music I discovered in the States — Hendrix and Cream and the Paul Butterfield Blues Band.”

It was with The Nachal Band that Sanderson first experimented with unleashing his electric guitar on an as yet unsuspecting public, opening the “Song for Peace” with a Hendrix-style guitar solo (for some aficionados, that was almost a Dylan-at-Newport moment). And it was in Nachal that Sanderson first made the acquaintance of his future Kaveret band mates Gov, Shamir, Oleartchick and Fenigstein.

Sanderson spent his nights working on an ambitious comedic rock opera titled “Poogy Tales.” When he and his friends were discharged from the IDF after their three years of service, Kaveret soon emerged, performing the songs and skits from “Poogy Tales.” The songs — pun laden and nonsensical — were rich in obscure cultural references and in-jokes, and ran the gamut from romantic ballads to a ridiculous song about the neighborhood grocery store (the earliest of the songs dates back to a 14-year-old Sanderson’s time at Music & Art).

Despite the initial mixed reactions — Sanderson says that with the band name Kaveret (Hebrew for “beehive”), ticket buyers expected a group of folksy kibbutzniks and were caught off guard by the electric guitars — Kaveret quickly gained an audience. But then the Yom Kippur War broke out. Kaveret was called up for reserve duty with the Nachal troupe and ended up giving many first performances in uniform. The audience: army units in respite from battles. “We would go from military post to military post,” Sanderson said, “and paradoxically our songs were a form of escapism for people who were very concerned and frightened because of what was going on. When reserve soldiers finally got to return to their civilian lives, they remembered those magical moments with us in the midst of all that chaos in the Sinai desert, in all those awful places where we gave concerts.”

By April 1974, Kaveret was the Israeli representative to the Eurovision Song Contest, in Brighton, England. They performed the song “I Gave Her My Life,” ostensibly a metaphysical love song with a rousing melody. But despite Israel still licking its wounds from the Yom Kippur War, and peace with Palestinians publicly advocated by only the most radical members of the left, Sanderson snuck in the lyric “One says he’s running out of sky, when there’s enough air for a state or even two,” which hinted at the taboo two-state solution. “We thought we’d take advantage of how popular Eurovision was to deliver our message, but it was lost amidst the band’s humor,” Sanderson said. And besides, “the audience was probably too busy trying to figure out why we were wearing sweaters, and didn’t really pay much attention to the lyrics.” ABBA won that year with “Waterloo”; Kaveret tied for seventh place with Ireland’s Tina Reynolds.

Kaveret disbanded, more or less amicably, in 1976. The band members have collaborated on countless occasions since, not to mention three reunions that drew massive crowds — and one unofficial reunion, at a memorial rally for prime minister Yitzhak Rabin a week after his assassination. But their last reunion was in 1998, in honor of Israel’s jubilee celebrations, and an entire generation has yet to have witnessed Kaveret in concert. Kaveret’s members have weathered their fair share of hardships, health related and otherwise. Still, the Kaveret-mania that has swept the nation in recent months points to more than just nostalgia: There’s a real craving. So when the Israel Festival approached, the band members knew it was now or never. When this summer’s tour was announced at a press conference, the joke was that it should be titled “The Last Waltz.”

“I’m doing it for my granddaughters,” Gov, the lead singer, recently said. “They’ve never seen Kaveret live onstage. But once they do, that’ll be enough.”

Tal Kra-Oz is a writer and law student living in Jerusalem.

Is It Last Dance for Kaveret, the ‘Israeli ABBA’?