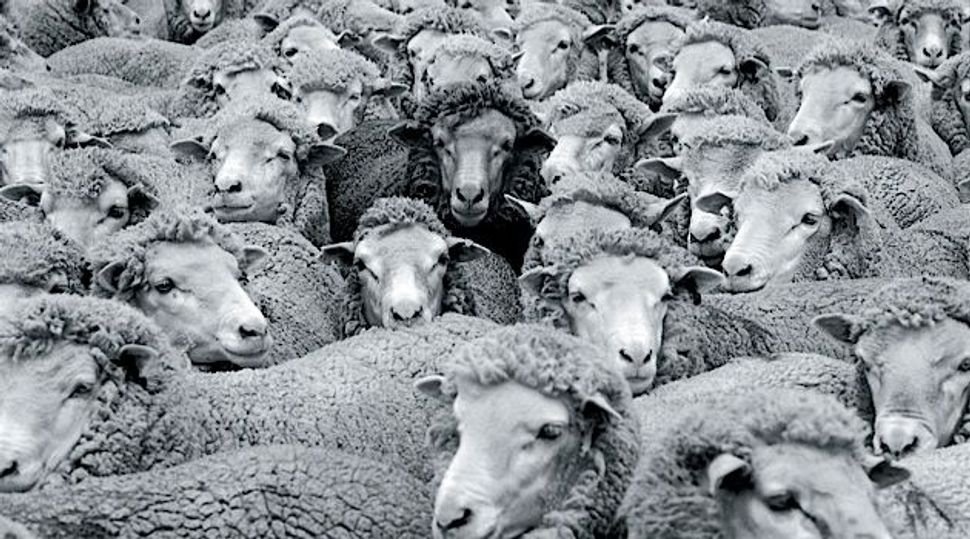 Poignant Moment: Participating in a traditional kosher sheep slaughtering was a powerful and intense experience for Elliot Cravitz, but one he is thankful he had. Image by Thinkstock

“Are you ready for the lamb that Jacob ate?” read the irresistible subject line that stood out from the spam in my inbox. The email was an invite to join in a “sheep schechting,” a kosher slaughtering, at a local farm. The event promised a discussion about kashrut and perspectives on eco-kosher, lunch and a share in the purchase of several sheep’s worth of meat for my family. A week later, I was standing in a field in Sebastopol, Calif., with three strangers, struggling to hold down a 200-pound ram in the last moments of its life.

But let me back up. Kosher meat is usually the main protein at my dinner table, but its high cost and variable quality feels like it tests my commitment to keeping kosher. I’ve long been toying with the idea of starting a kosher cowpool network called the “Kosher Meat Collective.” Essentially, it would connect Jewish communities with local farmers, shochets, or kosher slaughters, and families. The collective would help coordinate the production of local, kosher meat by allowing enough buyers to connect online to be able to make a bulk purchase (for example, a whole cow) from a local farmer, have it slaughtered in a kosher manner and share with the members of the collective.

But, months later the idea remained just another page in my sketchbook.

My wife and I were both brought up in kosher homes, and when we were married we wanted to continue the tradition in our New York apartment so we tolerated the cost of kosher meat. Then, about a year ago, we moved to Berkeley, Calif.

We were plunged into a maelstrom of forthright, sensible-shoe wearing, socially responsible eco-nerds. We scoffed in private at the earnestness and righteous indignation on display all around us, but then, quietly creeping, came the questions: “Why, with delicious local produce all around us, must we still travel miles for decent kosher meat? Why is it so expensive but not always good? Why aren’t we assured that the kosher meat we buy is organic and ethically sound?”

This last question echoed as we became more immersed in the local food culture. We read “The Omnivore’s Dilemma,” written by our Berkeley neighbor, Michael Pollan, and experienced the tastes and ideals of Chez Panisse. We arrived at the realization that for us, how animals are treated while alive is at least as important as how they are killed. How could we teach our boys about kashrut without also discussing the ethical treatment of the animals we eat?

Around the same time that I was sketching out the Kosher Meat Collective, we ordered our Passover brisket online from an “ethical glatt kosher butcher.” Then, a few weeks later, came the email that breathed new life into my idea. A local Jewish farmer wanted to schecht his sheep, and did anyone want to join?

I was in — and I agreed with my wife that I would take Solomon, our 5-year-old son. What better way to teach him that the meat we eat does not start out in shrink-wrapped packages at the supermarket? That Sunday, we carpooled to the farm with another of the attendees, a part-time computer programmer and puppet maker. On the hour’s drive, we talked about “maker culture” and the current obsession with returning to “traditional” ways of doing things. I was so swept up in the idea, the event we were about to attend began to seem quite normal. The feeling continued when we arrived at the farm. We were greeted by a pastoral scene of about a dozen adults accompanied by a tangle of kids running around a farmhouse and climbing trees.

We began by gathering in a circle where Steve, the farmer, introduced himself and his farm. He explained that his spotted “Jacob” sheep are considered to be descendants of those that Jacob picked from his father-in-law’s flock.

We went around the circle, introducing ourselves, a mix of hardcore carnivores, gastronomes looking to learn some butchery skills, Jews curious about kashrut and a local kosher caterer. We met the shochet who had flown in from Los Angeles for the day, and he told us he considered it a mitzvah to help families have kosher lamb for Passover.

Steve set out the agenda for the day. We would start with lunch, then schecht and skin sheep and, finally, begin butchering and kashering. But first lunch. We worked together to prepare a meal, consisting mostly of the delicious produce of the farm. Solomon was blissed out playing in the tree house. After the meal, it was time for the adults to get to work. I was excited: Could this be the proof of concept for the Kosher Meat Collective?

The shochet instructed us as we gathered around a foldout table near the sheep shed. Four of us carried out the first sheep; we struggled to keep hold of the ram’s legs, trying to avoid being kicked. After some bucking, the ram seemed mostly resigned. Our exclamations to each other at how strong the animal was petered out as we realized what was to come.

The shochet swiftly prepared the sheep’s neck and made the cut. There was an explosion of blood; I was grateful I’d had Solomon stay back with the other kids so that he would not witness this part. We held on to the sheep tightly for a minute, until the animal’s breathing grew faint. Around the table we were quiet, caught up in our own thoughts. We remained still as the flow of blood slowed. I’d never witnessed the ebbing away of a life like this. I thought about how this same scene had, in some form, been repeated throughout Jewish history, and how the ”natural order“ of our food chain did indeed seem quite natural.

Then the shochet began the butchering process. He started by reaching into the carcass, feeling for any inflammation or lesions on the lungs, signs of disease that meant the animal could not be termed glatt or smooth.

The rest of the process was long and more arduous than I had expected. Skinning the sheep was clearly a skill that took a lot of practice to neither leave tufts of wool nor take divots out of the meat. But there were benefits: I took home a few slices of “kosher bacon,“ wafer-thin strips of meat taken from around the sheep’s belly. As the day wore on, the carcasses were broken down and began to resemble more closely what was for sale at supermarkets.

Leaving some members of the group still plucking the chickens that had been shechted after the sheep, we headed home. On the way, I asked Solomon what he thought of the day. He was quite unperturbed by the butchery, but very impressed with the tree house. It was as much as I could hope for. Actually, I was relieved I’d not traumatized him in my attempt to show him where the food on his plate comes from. For my part, I had gained a great deal more admiration for small-scale farmers committed to their livestock’s quality of life in the face of harsh economics. I’m still suspicious that the price of kosher meat is inflated, but as a friend puts it, I need to put my startup where my mouth is. I guess it’s time to launch my Kickstarter for the Kosher Meat Collective.

Elliot Cravitz is an expat Brit, design consultant and entrepreneur. He lives with his wife and two boys in Berkeley, Calif.