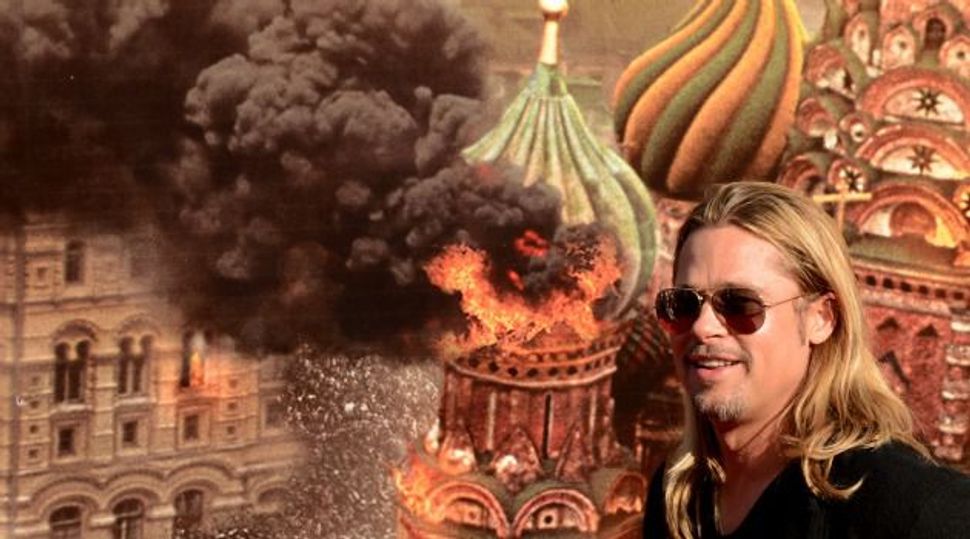 Only the Strong Survive: In ?World War Z,? starring Brad Pitt, Israelis protect themselves from the zombie invasion by creating a massive security wall. Image by Getty Images

If you were to judge only by what’s been said in the media firestorm it’s left in its wake, you might assume that the new Brad Pitt zombie extravaganza, “World War Z,” is so pro-Israel that by the time the credits roll, the audience members will be singing “Hatikva” just to inoculate themselves against the undead. The Times of Israel declared “World War Z” “the greatest piece of cinematic propaganda for Israel since Otto Preminger’s ‘Exodus.’” Al-Jazeera quoted several critics of Israel lambasting the film for defending “Israel’s apartheid wall.”

Jeffrey Goldberg, a columnist for Bloomberg View, hailed “World War Z” as “the most pro-Israel movie ever made” (though he added, “Or at the very least the most pro-Israel zombie movie”), and left-wing blogger Jesse Benjamin derided it as “zombie hasbara” (literally “explaining,” a Hebrew euphemism for propaganda). Paramount Pictures, the main studio backer of “World War Z,” was sufficiently worried that in the Turkish version, the subtitles reading “Israel” were replaced with “the Middle East.”

But the truth is, the producers of “World War Z” are not shills for Israel. While the movie does use Israel as an important symbol, it’s simply one of the more conspicuous pieces in a larger argument: to survive in this world requires a willingness to dispense with humanitarian niceties and take some ugly actions. (Spoiler alert!)

The movie begins with the simultaneous collapse of cities across the globe as the zombie infestation spreads and our hero, Gerry Lane (Brad Pitt doing his best Bruce Willis impression), seeks safety for his family. Soon Lane, recently retired from the United Nations, is whisked off to learn that only two countries, North Korea and Israel, have so far survived the zombie onslaught: the Koreans by knocking out every citizen’s teeth, and the Israelis by constructing a massive security wall around Jerusalem (sound familiar?).

Once he is in the Holy Land, Lane learns that Israel’s survival is due to the Mossad’s policy of the “10th Man”: For every potential threat, one out of 10 men in the agency assigned to the case needs to take it seriously, no matter how far-fetched it may seem.

The head of the Mossad, the 10th man investigating the zombie threat, managed to seal off the whole country just in the nick of time. Israel is compassionately admitting all non-zombie humans, but this proves less than strategically sound. As the crowd swells, Palestinians, secular Israelis and ultra-Orthodox Jews join together to sing a song of peace, attracting the attention of the outside zombie hoard, which (taking aliyah a little too literally) overruns the wall and destroys Jerusalem.

Most commentators have read this sequence as singing the praise of the Jewish people for their brilliant foresight and blaming the bungling peaceniks for letting down their guard. But this is only a small part of the film’s endorsement of a merciless, paranoid approach to danger.

The only way to survive is through brutal amputation: When an Israeli soldier is bitten, Lane saves her by unhesitatingly slicing off her hand; when a plane full of civilians is being taken over by zombies, Lane hurls a grenade and the explosion kills virtually everyone, tossing zombie and non-zombie alike out 10,000 feet above ground. In the film’s climax we learn how to defeat the undead: Lane infects himself with typhoid, rendering him uninteresting to the zombies looking for healthy prey.

Time and again it is those like Lane, the North Koreans and, at first, the Israelis who can overlook suffering now for survival until tomorrow — who can abandon blind hope and unblinkingly swallow the bitter pill of near total self-interest.

The critique of hope goes even deeper than that. The scene in Jerusalem is eerily reminiscent of an episode in the Book of Revelation in which 144,000 Jews are singled out to survive the Apocalypse; gathering on Mount Zion with “a great multitude that no one could count, from every nation, tribe, people and language,” these chosen few sing “a new song before the throne [of God].” (New International Version, Book of Revelation 7:3–9, 14:1–3).

But instead of being saved by the grace of God, as in Revelation, those of the singing multitude in “World War Z” are punished for their faith by being viciously turned into a mass of raging zombies. The Star of David may flutter in the breeze, Israel Defense Forces helicopters may swoop confidently through the skies, but in the end, Israel is nothing special, just another group of chumps too compassionate to survive. To quote Tom Lehrer, “‘The Lord’s our shepherd,’ says the Psalm / but just in case we better get a bomb.”

The movie’s argument comes directly from the novel on which it’s based. In an interview with The New York Times, the novel’s author, Max Brooks, explained that he wrote it in response to the fearful post-9/11 world: “There’s been some really scary stuff that’s been happening — 9/11, Iraq, Afghanistan, Katrina… global warming, global financial meltdown, bird flu, swine flu, SARS…. People really feel like the system’s breaking down.” The world, to Brooks, is constantly full of threats, and if he had his way, his books would be in the self-help section. If the Israelis are on to anything, the movie shows it when they think that any danger, no matter how small, is quite possibly cataclysmic and demands our sharpest attention and dispassionate calculation. To put it bluntly, the only Jewish virtue trumpeted in this film is neuroticism.

Doni Bloomfield is a Forward summer fellow, and will be finishing his Bachelor of Arts in history at the University of Chicago next year.