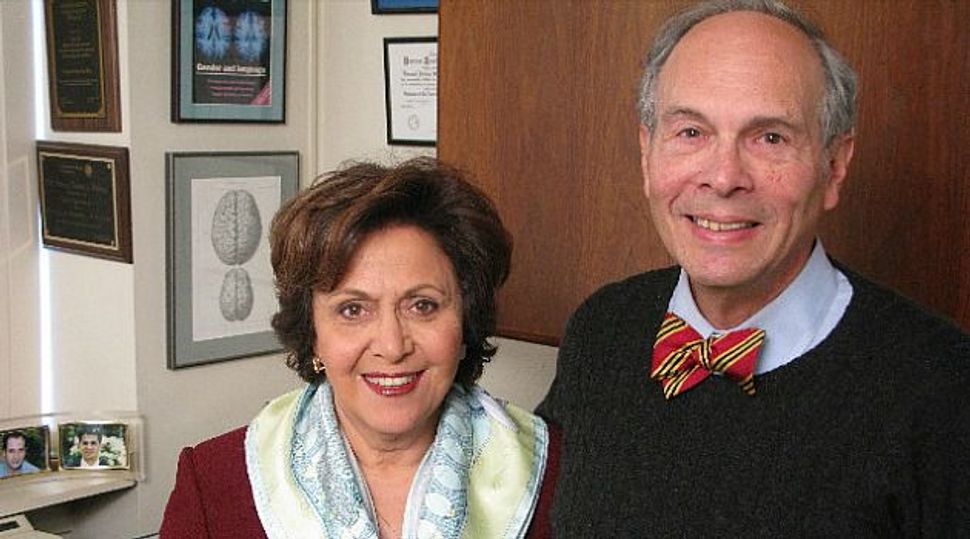 Decoding Dyslexia: Drs. Sally and Bennett Shaywitz reach out to diverse groups, including Jewish day schools, rabbis, and cantors to help them understand the challenges facing their students. Image by courtesy of sally shaywitz

Sally Shaywitz was home with three children under the age of five when she was asked to take a position at Yale School of Medicine that would focus on learning difficulties.

The question of why some kids struggle in school was not exactly a hotbed of medical research in the 1970s, but Shaywitz, a developmental pediatrician, said yes to the offer.

“Two things struck me from the start,” said Shaywitz, whose husband, a child neurologist, was already at Yale. “One was how little science was available at the time, and two, how there was not much information on what happened to kids whose struggles have not come to anyone’s attention.”

So began Shaywitz’s quest to better understand dyslexia, an all-too-common learning disorder that can cause severe reading difficulties in even the brightest of kids. Sally Shaywitz and her husband, Bennett Shaywitz, joined forces that eventually led to the Yale Center for Dyslexia & Creativity, a name that reflects the pair’s belief that there’s also an upside to dyslexia: People with dyslexia tend to be creative and out-of-the-box thinkers, the very characteristics that can mask the fact that a child is having a tough time reading.

Stuart Yudofsky, chair of the Menninger Department of Psychiatry & Behavioral Sciences at Baylor College of Medicine, who takes both a professional and personal interest in the Shaywitzes’ work because he has dyslexia, calls them “pioneers not only in advancing the understanding of dyslexia, but also in helping the world understand people who have dyslexia and helping people with dyslexia understand themselves.”

As a youngster Yudofsky was told he was an underachiever and careless, when in fact he could barely read the words in his schoolbooks or on the blackboard. He taught himself to read not by phonetically sounding out words, but by learning to recognize words as a whole. It wasn’t until he graduated from medical school and was doing his residency that he first heard the word “dyslexia.”

The Shaywitzes broadly define dyslexia as “an unexpected difficulty in learning to read.”

“We know that people are born to speak, but they are not born to read,” said Sally Shaywitz, who was raised in an Orthodox Jewish home and descends from a line of scholars going back to the Chofetz Chaim of 19th-century Poland. “Reading must be taught.”

Typically a person’s IQ level and reading ability track fairly closely, she said, but with dyslexia “you can have a high IQ and a low reading ability … thus the notion of an unexpected difficulty.”

Many people still cling to the old idea of dyslexia — that dyslexic kids read and write words and letters backwards. It was also long thought that dyslexia was a rare disorder that almost exclusively affected boys. By periodically testing and following the progress of more than 400 Connecticut schoolchildren from kindergarten into their early 30s, the Shaywitzes were able to dispel some myths.

“One of the things we’ve learned from the longitudinal study is that girls are almost as equally affected as boys, though little girls may be sitting quietly at their desks and not reading and not be identified by their teachers,” said Bennett Shaywitz, who is section chief of pediatric neurology and the Charles and Helen Schwab Professor in Dyslexia and Learning Development at Yale.

The Connecticut study also found that 1 in 5 children have dyslexia, though many go unrecognized. Dyslexia runs in families, suggesting a possible genetic component, though there is no single gene or even group of genes known to cause it. Shaywitzes said that “research shows that there are many, many genes that influence dyslexia,” as well as environmental factors.

“You can’t predict who will or won’t be dyslexic by examining their genes,” said Sally Shaywitz.

While the public face of dyslexia is often white American boys, the reading disorder exists around the globe, from Japan to Israel and its Arab neighbors, and it crosses racial, ethnic and socioeconomic lines. The couple’s new project, the Multicultural Dyslexia Awareness Initiative, is aimed at increasing awareness of dyslexia in African-American and Latino communities, where dyslexia, they say, often goes undiagnosed and untreated, leading sometimes to academic failure and school dropout.

One of the worst things dyslexia does is rob a child of self-esteem,” Sally Shaywitz said. But she and her husband are also quick to point out the positives — that kids with dyslexia are often blessed with “a sea of strengths.” While they have trouble decoding the phonologic components of words, that weakness is often surrounded by strengths in reasoning, problem solving, comprehension, concept formation, critical thinking, general knowledge and vocabulary.

The Shaywitzes said they sometimes receive calls from Jewish day school parents with concerns that the dual language learning of Hebrew and English is daunting for their dyslexic children. Jewish day schools, they said, are taking an increasing interest in dyslexia, and the couple was recently invited to speak on dyslexia at a special conference of the Board of Jewish Education in New York City.

“More and more rabbis and cantors are becoming knowledgeable not only about dyslexia, but how best to support and prepare a child who is dyslexic for his bar mitzvah,” said Shaywitz, who added that she’s attended the bar mitzvahs of many of her patients and “they have all been remarkably successful, with the child and family coming away with pride.”

Underscoring the Shaywitzes’ dyslexia research is their work using functional MRI to study the brains of children with dyslexia compared to those of good readers. The imaging scans reveal glitches in the brain circuitry of dyslexics as they carry out reading-related tasks while in the MRI machine.

In her 2003 book, “Overcoming Dyslexia,” Sally Shaywitz writes that “imaging studies revealed markedly different brain activation patterns in dyslexic readers compared to those in good readers. As they read, good readers activate the back of the brain and also, to some extent, the front of the brain. In contrast, dyslexic readers show a fault in the system: underactivation of neural pathways in the back of the brain. Consequently, they have initial trouble analyzing words and transforming letters into sounds and even as they mature, they remain slow and not fluent readers.”

Christine Bak, a Philadelphia attorney, remembers vividly the time she heard the Shaywitzes speak. Her son, who was in early elementary school, had been diagnosed with dyslexia, and Bak was desperate for answers. When Bak saw the Shaywitzes’ slides comparing MRI brain scans of kids with dyslexia compared to non-dyslexic kids, “a light bulb went off.”

“The Shaywitzes were able to explain the physical process of what was going on in my son’s brain. It wasn’t that he was dumb or lazy,” Bak said. “There really was a reason it took him longer to see that H-O-U-S-E was the word ‘house.’”

She left the lecture understanding why it could be important to advocate for extra test time for her son.

“The Shaywitz studies gave us hope,” said Bak, whose son, Michael, is a double chemistry-geology major at the University of Pennsylvania. “We learned that early intervention and the type of program he was in — repetitive reading assignments at his special school — would enable his brain to ‘reprogram’ the passageways of the synapses and allow him to learn to read.”

Patricia Roberts, executive director and co-founder of AIM Academy in Conshohocken, Pa. — a private school that serves 230 children in grades 1 to 12 who have dyslexia and other learning difficulties — said the Shaywitzes’ research has heavily influenced the philosophy of the school. She heard the researchers speak at the International Dyslexia Association meeting in 2012, where they were honored with the group’s most prestigious award.

“They were very optimistic and enthused about what is to come in the field of dyslexia research,” said Roberts. Their message, she said, was that with early diagnosis and an early start in teaching reading “using research-based, evidence-based programs, you can begin to significantly close the reading gap.”

The Shaywitzes’ belief in translating research into practice has led them to push for change in higher education, too. They meet with college and university admission counselors about the pluses of having dyslexic students in their ranks (a Shaywitz study of dyslexic Yale grads has found they did well). They also are focused on encouraging change in testing practices to allow dyslexic students to have extra time on exams (such as the LSAT and MCAT) used for admission to professional schools.

Sally Shaywitz said parents of dyslexic kids need to be advocates, too.

“A parent has to be the child’s champion in so many ways,” she said. “A child needs to know her parent ‘has faith in me no matter what.’”

Susan FitzGerald, a Philadelphia medical writer, is co-author of a parenting book on raising adolescents, “Letting Go with Love and Confidence.” Contact her at feedback@forward.com