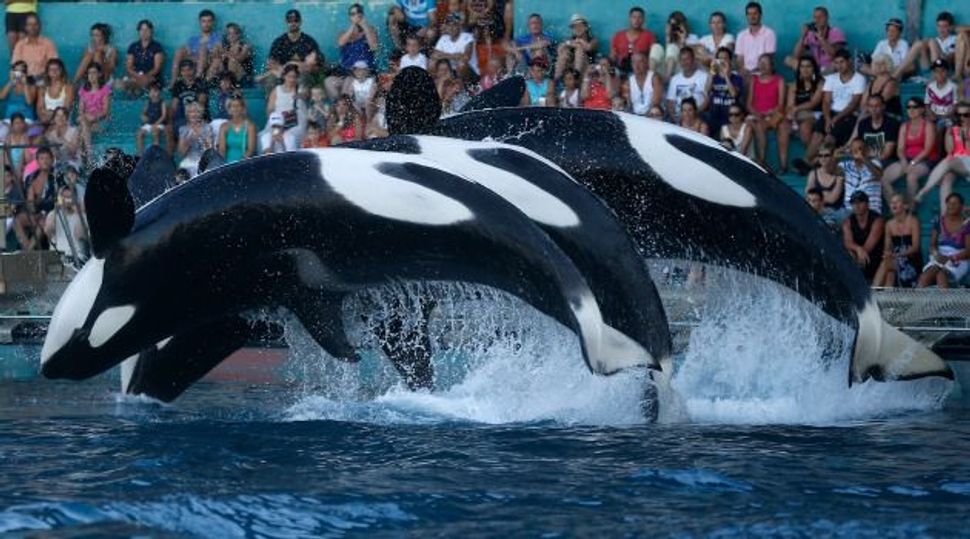 Born Free: The orca Tilikum was sold to SeaWorld after being separated from its mother in the wild. Image by Getty Images

If you’re looking for a good cry but are tired of Adele and don’t have the time for “Les Misérables,” try watching the first 20 minutes of “Blackfish,” the new documentary by Gabriela Cowperwaith, originally in theaters and set to air on CNN in October. You’ll hear the story of the 1983 capture of Tilikum, the 6-ton orca responsible for the death of three people and still living on-site at SeaWorld Orlando. If the orca herd’s failed attempt to save its babies, its refusal to leave the side of the boat holding the captured 3-year-old and the sounds of the crying mothers demanding the child’s return don’t bring you to tears, just wait: The emotional breakdown of one of the captors — a full-grown, white-haired man — calling the capture “the worst thing [he’s] ever done,” will probably do the trick.

But that is just the beginning of Tilikum’s sad, ongoing tale. After being separated from his family, he is sent to Sealand of the Pacific, a now closed, shabby (to put it mildly) little water park in Victoria, British Columbia. There he is trained using techniques that pit the other, larger whales against him, and then locked in a tiny cage (20 feet deep and 28 feet in diameter) with them all night, emerging in the morning covered with teeth marks.

When a trainer falls in the pool, Tilikum is implicated in her death; but instead of putting down the whale (as would have immediately happened if he were, say, a pit bull) or setting him free, Sealand closes and he is sold to SeaWorld.

Of all the abuses that, according to the documentary, the whales, including Tilikum, suffer at SeaWorld, there is nothing more heartbreaking than the company’s seemingly blasé attitude about separating babies from their mothers. Both the trainers and the scientists attest to the obvious signs of mourning the female orcas exhibit when the calves are taken from them.

Killer whales, we learn, are not only highly communicative, even cultured mammals, but are also extremely family oriented. Offspring stay with their mothers for their entire lives. Separating them, we see (and hear — the mothers sound like they are literally screaming and crying), is nothing short of cruel.

Unlike most of Western civilization, Judaism has long recognized the basic lack of humanity inherent in animal abuse. In contrast to say, Kierkegaard who viewed animals as anxiety- and despair-free creatures, and Descartes, who famously wrote that a dog with a broken paw can’t even feel its own pain, Jewish law not only forbids us from inflicting pain on animals, but also goes even further, requiring us to ease their unnecessary suffering, whatever has caused it.

The doctrine of tza’ar ba’alei chaim, or the prevention of the suffering of animals, originates in the Torah and has modern-day implications that go far beyond the days of plowing fields with oxen. The Torah tells us — not once, but twice — that if we see an overburdened animal, whether we know or like the owner, we must unload the baggage from its back. (Exodus 23:5; Deuteronomy 22:4). We cannot walk by and ignore it.

The Torah also instructs us to consider the differences between animals and their abilities: It forbids tying together an ox and a donkey to plow a field; these two animals don’t naturally work at the same pace, so pairing them will likely cause injury or pain. If Tilikum’s trainers had taken this lesson into account when training him, he might not have spent his nights under attack from the other whales.

But by far the most emotional, heart-wrenching tragedy shown in “Blackfish” is the mother-baby separation, which occurred in the wild with Tilikum’s capture and now continues in captivity every time a female orca gives birth and the powers that be decide to move the baby to a different water park. The Torah’s stance on the existence of a mother-child bond in animals is unwavering. Examples include the prohibition of boiling of a kid in its mother’s milk — mentioned three times (Exodus 23:19; Exodus 34:26; Deuteronomy. 14:21) — and forbidding us from slaughtering a cow or sheep on the same day its young is slaughtered (Leviticus 22:28).

“Blackfish” only begins to tell the story of the abuse that makes venues like SeaWorld possible, and orcas are not the only animals that are exploited. The 2009 Oscar-winning documentary “The Cove” explains how creating a market for live dolphins (they are sold to water parks for around $200,000 each) also creates a market for dead ones.

Every year, fishermen in Taiji, Japan, corral more than 20,000 dolphins into a cove, where trainers come, pick their favorites and take them to their new “homes” to be coached into performers. Those who aren’t chosen are then slaughtered en masse and sold as meat. While SeaWorld has stopped buying its dolphins from Taiji, it hasn’t used its authority in the world of dolphinariums to end the practices, either. Why?

As Fred Jacobs, vice president of communications for Busch Entertainment Corp., SeaWorld’s corporate parent, told MSNBC, “We do not want to be accused of being disingenuous… if we go to an aquarium in China and say, ‘You guys should not be involved,’ the first thing out of their mouths will be, ‘Well, you did it,’ and we cannot argue that point.” That might be fine for a giant, mega-corporation, but as we know, Jews are not allowed to sit idly by while an animal, whoever the owner is, suffers.

Deena Shanker is a writer and occasional attorney living in New York City. You can see more of her work on her website, and follow her on Twitter, deenashanker