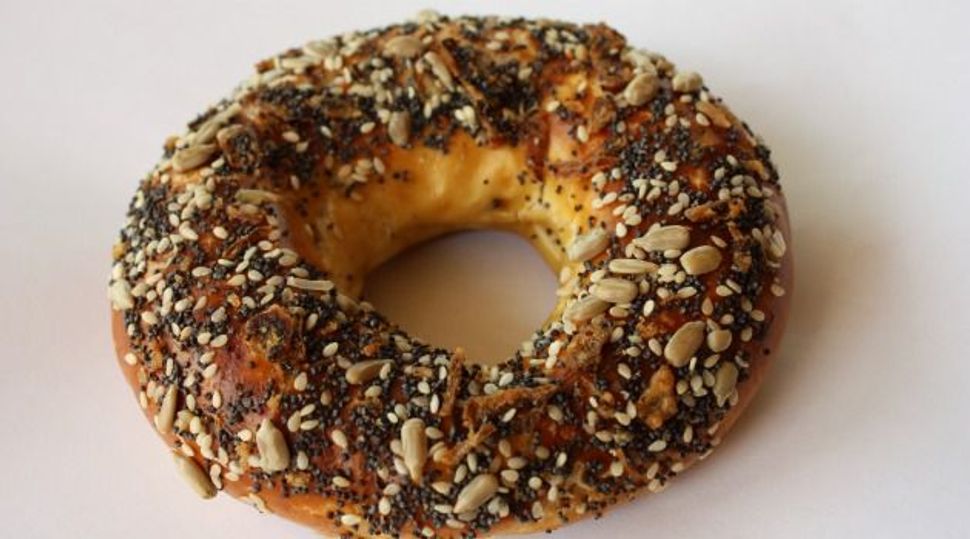 Not every column sees a mystery cleared up so quickly. Two weeks ago I appealed to you for help regarding the origin of the expression “to bagel” in the sense of subtly letting someone know you are Jewish or ascertaining whether he or she is. One of several responses received comes from Montreal-born human rights activist Hillel Neuer, executive director of the organization U.N. Watch. He writes:

“The expression ‘to bagel someone’ was created by my best friend David (Doodie) Miller in Montreal, circa 1992. Popularized by our group of friends via word of mouth, it was first documented in print by Jessica Levine Kupferberg (wife of my other best friend from Montreal, Dr. David Kupferberg) who wrote up the matter in 2007, on the website Aish.com.

“What happened was this. As one of the few kippa-clad students on his university campus in Montreal, Doodie — who studied Theater and Political Science at Concordia University — couldn’t help but notice the recurring phenomenon of Jews eagerly seeking to communicate their Jewishness to him in various ways. As he related it, a fellow student in a classroom who showed no obvious signs of being Jewish would suddenly motion to him and whisper, ‘The teacher reminds me of my zayde.’ A few minutes later, the same student nonchalantly let out a krechtz and groaned in a faux Yiddish accent : ‘Oy! My back!’ And again, turning toward Doodie: ‘This class? It’s lasting longer than my Pesach seder.’”

“Doodie would regale us with these and other real (and embellished) incidents. Our group of Modern Orthodox friends immediately recognized the phenomenon from our personal experience and offered our own stories in return. I shared my account of an unknown woman on campus who, standing next to me as we waited for an elevator, randomly asked me, ‘How was your fast?’ (I’m not even sure that this was right after Yom Kippur.)”

“Doodie’s theory of all this was that when Jews on campus and elsewhere would see our kippas, they would instinctively want to identify, reach out, and connect. Montreal, after all, is a Jewishly traditional community. Doodie called this ‘The Bagel Theory of Judaism.’ ‘There I was in class,’ he would say, ‘and this guy starts to bagel me.’”

Jessica Levine Kupferberg’s Internet article confirms Neuer’s account, although in her version, a young woman sitting next to Doodie Miller whispered, “This class is as boring as my zayde’s seder.” To this she adds several bageling experiences of her own, such as the time in Rome an American tourist studying a map said loudly to his wife in the presence of Kupferberg and her husband, “I wonder where the synagogue is.” (The two couples struck up a conversation and went off to eat together in a kosher pizzeria.) Another time, she relates, on a beach in California, “an impish girl in cornrows and a bikini” scampered over to say “Good shabbes.” Bageling can also, she observes, be non-verbal, as when a little boy once ran up to her, flashed a mezuza around his neck and ran away with a grin.

Kupferberg’s article drew many comments, such as one by someone who, on a flight to Miami, found himself sitting next to “an older woman who struck me as an Orthodox Jew. After a while, she fell asleep and her bag toppled onto my lap. Waking up, she apologized and said, ‘What a day I’ve had with all this schlepping!’ With a smile, I replied, ‘At this altitude, who cares how much we kvetch?’ She looked at me, smiled back, and said, ‘I had a feeling.’” Bageled again!

Although we Jews tend to think that the world revolves around us, the Bagel Theory of Judaism should not be confused with the Bagel Theory of the Universe, or more precisely, the Big Bagel Theory of the Universe. As formulated by its originator, science writer Howard Bloom, in his book “The God Problem: How A Godless Cosmos Creates,” Big Bagel Theory seeks to explain the enigmas of “dark energy” and “anti-matter” by positing an originally bagel-shaped universe, through whose hole matter spouted forth, as it were, at the time of the Big Bang. Since I don’t pretend to understand Big Bagel Theory, I won’t try to get you to. I’ll only say in its defense that on certain days of light cloud cover the heavens do indeed look smeared with cream cheese.