Learning About Jewish Community From Manhattan’s Upper West Side 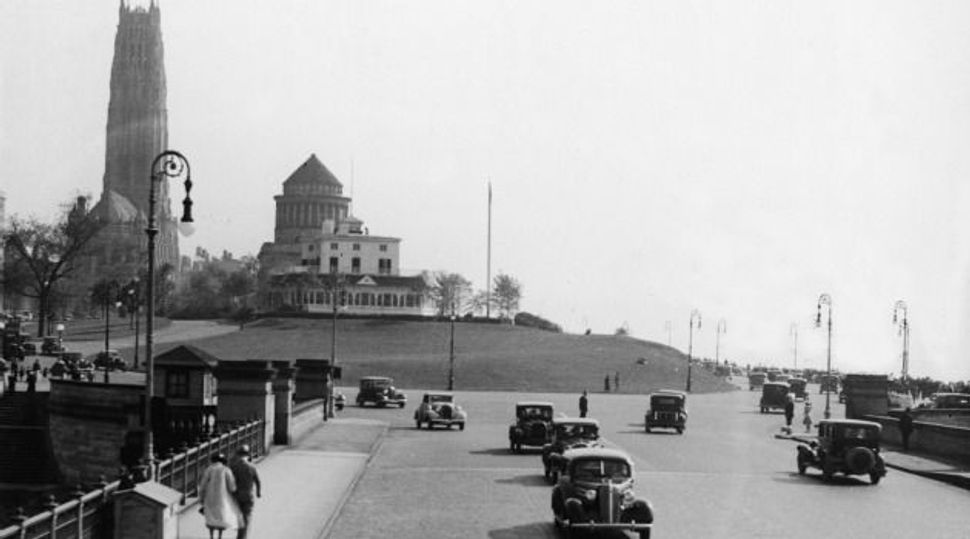 Once Upon a Time on the Upper West: In 1930, when this photo was taken, the view of the Grant Memorial and Riverside Drive was not as cluttered as it is today. Image by Getty Images

The recent findings of the Pew Research Center study (yes, that again) have left many of us scratching our heads, biting our nails and searching every which way for answers. Some have sought explanation, let alone consolation, in the broad strokes of macro-analysis, others in anecdote and still others in history.

The past, as you know, is my default position: I’m often the only one in the room who looks backward rather than forward. But in October, at a gathering convened by Rabbi Jeremy Kalmanofsky of the storied congregation Ansche Chesed, on Manhattan’s Upper West Side, the past was within everyone’s sights.

This event, which zeroed in on the vibrant history of the Upper West Side and on the ways in which it continues to loom large as the model of an engaged, and varied, Jewish citizenry, featured yours truly as well as John Podhoretz, editor of the magazine Commentary, and John Ruskay, executive vice president and CEO of New York’s UJA-Federation.

Each of us was called on to hold forth from our respective perches about the neighborhood’s significance. That all three of us also happened to be longtime residents of the West Side burnished our laurels and, one hopes, deepened our credibility.

The gathering, Kalmanofsky told me, had been prompted by the recent death of several elderly congregants who had arrived on the Upper West Side more than 60 years earlier as refugees and displaced persons. It was also prompted by his own musings on the relationship between the individual and the collective. Taking stock, the rabbi encouraged the members of Ansche Chesed to share their photographic memories of the neighborhood and to attend — and participate — in a discussion about change and stasis, ebb and flow, the site specific and the reproducible.

Despite the early hour — a Sunday morning — and the weather, a picture-perfect fall day, Ansche Chesed’s ballroom was chock-a-block with Upper West Siders eager to tell their stories, share their reminiscences and make a political point or two. But first they had to listen to what the panelists had to say. I set things in motion with a swiftly paced account of the neighborhood’s emergence during the interwar years into what one former resident, writing in 1947, described as “a way of life, with its own modes and rituals and codes.”

Podhoretz, picking up where I left off, chronicled the neighborhood’s decline during the postwar era, while Ruskay focused on the efflorescence of Jewish cultural creativity that began in the late 1960s and early ’70s, and whose effects are still being felt generations later.

With one eye on the sources, which ranged from the demographic surveys of the Bureau of Jewish Social Research and articles in Commentary to personal experience, and another eye on the larger context, which encompassed such broad phenomena as upward mobility, urban renewal, suburbanization and the counterculture, the three of us sought to account for the vitality of the Upper West Side and its ongoing hold on the American Jewish imagination. Was it a matter of density? Visibility? Housing stock? A serendipitous coming together of people and ideas?

No sooner did we conclude our part of the program, which was probably more effective in raising questions than in furnishing answers, when a flurry of hands shot up. I don’t think I’m guilty of exaggerating (well, maybe, but only slightly) when I say that virtually every member of the audience had something to say. Contributing both “an observation and a question” (though usually more of the former than the latter), they fondly invoked the names of some of the area’s former leaders, among them rabbis Gunter Hirschberg, Marshall Meyer and Shlomo Riskin, while also recalling dueling kosher butchers (the “good one” and the “not so good one”), and the women who, with their German and Hungarian accents, worked behind the counter at Barton’s candy store or staffed the local bakeries that adorned the neighborhood like sprinkles on a cupcake.

The memories of a once glorious synagogue ballroom left to languish in the wake of a flood because of limited resources came to mind, as did recollections of the diverse crowds of people who, during Rosh Hashanah, now gather together on the banks of the Hudson to recite tashlikh, putting at least one member of the audience in mind of the biblical gathering at the foot of Mount Sinai.

Others, less biblically inclined, perhaps, spoke of the increasingly high cost of living on the West Side and wondered whether the area’s characteristic heterogeneity was about to go the way of the mom and pop stores and dairy restaurants that once lined Broadway.

No single narrative emerged from among the welter of eager voices and perspectives; the Upper West Side was, and is, far too diverse for that. What did come through loud and clear was a fierce sense of community and an abiding commitment to Jewish life at the neighborhood level.

As American Jewry’s leaders regroup in the wake of the Pew study’s conclusions, perhaps they would do well to heed the example of the Upper West Side and to look no further than their own backyards.

Learning About Jewish Community From Manhattan’s Upper West Side