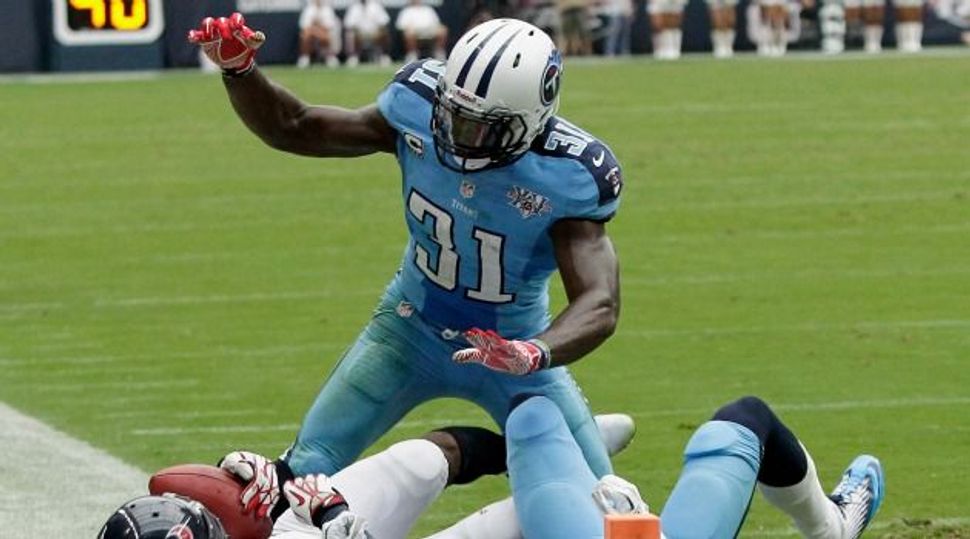 Fighting Words: Tennessee Titans?s defensive back Bernard Pollard commented that his coach Mike Munchak made his players work as if they were ?Hebrew slaves.? Image by Getty Images

“I monitor certain search items related to Judaism on social media, and recently I came across the expression ‘worked like a Hebrew slave’ for the first time. It looks like it might be more frequently used in the African-American community. I wonder what are your thoughts on it.”

Mr. Wecker may have encountered this expression in a remark made some two months ago by Tennessee Titans’ African-American defensive back Bernard Pollard, who told his radio interviewers that the Titans’ coach, Mike Munchak, was “working us like Hebrew slaves.”

The remark prompted nationally known sports writer Larry Brown to chide Pollard. “Slaves,” Brown wrote, “are forced to work against their will, unlike professional football players who give their consent and are well compensated to practice. It’s a sensitive subject…. Maybe Pollard needs to read the story of Passover to familiarize himself with the history of the matter before using it as a comparison in the future.”

Actually, the only insensitivity here was Brown’s. Comparing themselves to the Israelite slaves in Egypt was a staple of the religion of black Americans both before and after their emancipation from slavery and is undoubtedly the ultimate source of the expression used by Pollard.

What fewer people know is that black spirituals like “Go Down, Moses,” or the almost equally well-known “Wade in the Water,” were not just about an identification with the Hebrew slaves of the Bible; they were also coded allusions to fleeing Southern slavery for the North, and crossing the Red Sea — or alternately, the Jordan — stood, in them, for crossing the Ohio River, which formed the boundary in the Midwest between free states like Ohio, Indiana and Illinois and slave states like Virginia, Kentucky and Missouri. The “Underground Railroad” that was followed by fleeing slaves crossed the Ohio in many places.

“To work like a Hebrew slave” would thus have been a perfectly natural expression for American blacks and one might have expected it to be found in their language already in the 19th century or earlier. And yet my friend Michal Sobel, a professor of history who specializes in 19th- and early 20th-century African-American culture, tells me that she has never run across it in her research.

The idiom, although certainly not Pollard’s invention, is apparently a recent one, and indeed, its only appearance that I have been able to find in a reference work is in the Internet’s A Dictionary of Prison Slang, which defines it as “a Black expression emphasizing forced labor in prison and the condition of captivity.”

Nevertheless, the origin of the expression in African-American religion, and most likely in church sermons, seems to me certain. The actual phrase “a Hebrew slave” occurs in the book of Exodus (it is there that the people of Israel is referred to for the last time as “Hebrews” rather than “Israelites”) and has undoubtedly been used by African-American preachers in our own times, too.

Whether, as an item in black American speech, it first started in prisons and spread to the outside world or vice versa, I can’t say; it will be interesting, in any case, to see if it now spreads still further to general American speech. Perhaps if it did, Larry Brown would have a point. While, as a Jew, I certainly don’t mind Bernard Pollard saying that he works like a Hebrew slave, I’m not sure I would have liked to hear the same thing from Steve Jobs.

After describing at some length what it is like to play on a team that goes from davening to downfield passing in a morning, the article ends with the grandfather of the Hurricanes’ fullback declaring, after watching a game, “I was schlepping naches” (defined by the Times as “deriving pride or satisfaction”). And Ms. Berkman writes: “I always thought the term was ‘shepping nakhes.’”

Indeed, it is. The Times, which prides itself on its faultless English, should perhaps employ a part-time proofreader with some knowledge of Yiddish. One sheps nakhes and shleps the Sunday Times home from the newsstand. Vive la petite difference!