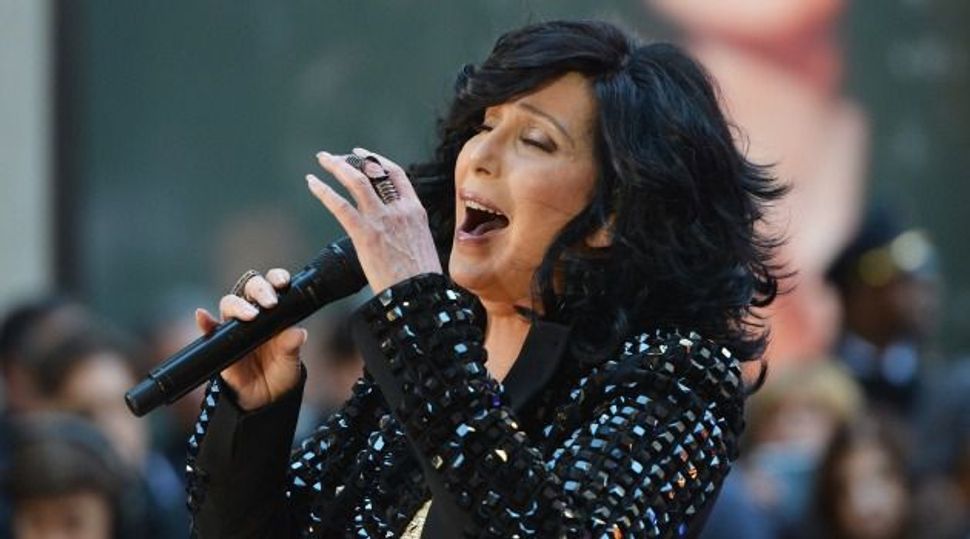 Sonny Days Ahead: Legendary entertainer Cher is hitting the road for the first time in eight years. Image by Getty Images

In the beginning, there was Cher. And the Lord saw that Cher was good, and so He made Madonna. And Britney. And Gaga. And Miley. And then, exhausted, spent, and depressed about twerking, He went back to the drawing board and breathed new life into Cher… again.

We’re on the verge of yet another Cher comeback — these happen roughly once per decade. Last fall, she released her first album in 11 years, “Closer to the Truth,” and this year she hits the road for “Dressed to Kill,” her first United States arena tour in eight years. It begins in March and is scheduled to run through July, but will in all likelihood continue well into the rest of the year and span other continents.

Cher has always been a master of invention and reinvention. Her career spans the worlds of pop music, TV and film; she’s been a star as one-half of the famous duo Sonny and Cher (both on the pop charts and on TV), and one of the most successful solo female recording artists of the past five decades (she’s the only artist to have a No. 1 hit in every decade since the 1960s). But more than that, Cher is that rare creature — a celebrity whose fame transcends her artistic and commercial accomplishments (and failures) and in some way becomes her greatest pop culture achievement.

While Cher is of mixed ethnicity, with a mother of Irish, English and German descent and an Armenian father (she was born Cherilyn Sarkisian), she is probably most often thought to be Native American. She’s part Cherokee on her mother’s side, and she played up that heritage in costume and in song quite a bit in the 1970s.

While Cher has no Jewish background, many of the key people in her life — friends, boyfriends and collaborators — have been Jews. Her somewhat exotic ancestry, her distinctive looks, and her assertive independence have on occasion resulted in her taking on roles both in her work and in life that are expressive of her affinity with Jewish people and Jewish causes.

1) As is well known, in the 20th century the Armenian people and the Jews shared a tragic history, both victims of attempted genocide. And rounding out the Jewish, Christian and Muslim quarters of Jerusalem’s Old City is the Armenian Quarter, where there has been a continuous Armenian presence dating back to well before there were even such things as Christians and Muslims, to say nothing of quarters named after them.

2) Most Native American peoples came to this continent via the Beringian land bridge from Siberia. Recent DNA evidence suggests that many of those very early immigrants originally hailed from the Middle East and Europe. Given the many Native American traditions, rituals, beliefs and legends that mirror those of Judaism, some speculate that some or all of these peoples were actually descendants of the Ten Lost Tribes of Israel.

3). Much of the iconography of Cher’s solo hits of the 1970s was inspired by her Armenian and Cherokee heritage, as well as her tough upbringing, perhaps nowhere more successfully than in the hit song, “Gypsies, Tramps & Thieves” — her first solo No. 1 hit record — a portrayal of life lived in the social margins. Gypsies, of course, have long been cultural and historical cousins to Jews, living lives in parallel, and sharing exile and diaspora, musical and professional affinities, and common enemies among Nazis and other European right-wing nationalists.

4) From her beginnings as a backup vocalist working for Jewish pop impresario Phil Spector (on hit songs including the Ronettes’ “Be My Baby” and the Righteous Brothers’ “You’ve Lost That Lovin’ Feelin’”), Cher has enjoyed great success singing the works of such great Jewish songwriters as Bob Dylan, Burt Bacharach and Hal David, and her most important hitmaker of the last three decades, Diane Warren. She’s recorded more songs by Warren and Dylan than any other songwriter.

5) Among Cher’s many boyfriends, a few great loves of her life stand out — Jewish music mogul David Geffen (before he came out as gay); Chaim Witz, the Israeli-born rock bassist and vocalist better known as Gene Simmons of the rock band Kiss; and Robert Camilletti, 18 years her junior, who, although not Jewish, was known as “the bagel boy” for his stint working in a bagel bakery. While dating Simmons, Cher got her first up close and personal experience of anti-Semitism when the two were apartment hunting and a realtor confided to her that she couldn’t show them certain luxury apartments because they were in buildings where the co-op boards would have turned down Simmons for being Jewish. Cher also famously attended a seder at Simmons’s mother’s house on Long Island, during which she had to stand the entire time because she’d just had her tukhes surgically nipped and tucked.

6) While her marriage to rock singer and famous heroin addict Gregg Allman was short-lived, it did produce a son named Elijah, as in the Hebrew prophet. Elijah joined the family business; his first guitar was a gift from “Uncle Gene” Simmons.

7) Cher’s early mentors in her film career were Jewish directors Mike Nichols (“Silkwood”) and Peter Bogdanovich (“Mask”), both of whom directed her in award-winning roles that helped establish her as a serious actress. Cher portrayed Jewish women in two dramatic roles: In the 1990 film “Mermaids,” she played Winona Ryder’s Jewish mother, Mrs. Flax, and in the 1999 Franco Zeffirelli movie “Tea with Mussolini,” Cher played the film’s hero, Elsa Morganthal Strauss-Armistan, a young Jewish-American widow and singer who saves a group of expatriate Englishwomen from Italian fascists.

8) In a rare venture into contemporary politics in the 2012 presidential campaign, Cher used her considerable social media presence on Twitter to defend Barack Obama against charges that he was an anti-Israeli Muslim, even quoting Ehud Barak and Shimon Peres to the effect that Obama was a true friend of Israel.

Seth Rogovoy is a longtime contributor to the Forward, where he has recently explored the kabbalistic underpinnings of such pop culture figures as David Bowie, James Bond, and Aerosmith.