A Good Season To Live High on the ‘Khoge’ 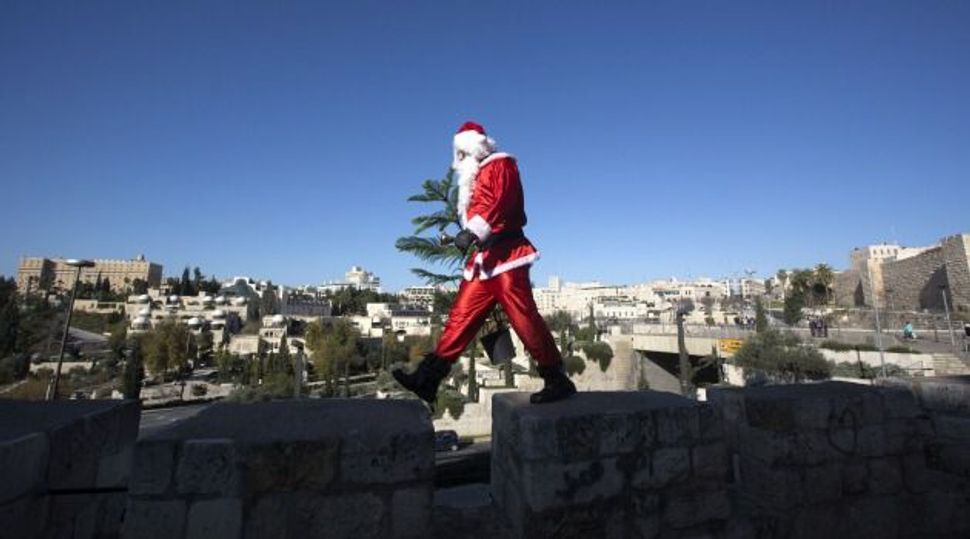 Just in time for the last week of December, Beth Kissileff has a query about the Yiddish word khoge, which denotes a non-Jewish holiday. Does it, she asks, refer only to a religious holiday like Christmas, or does it also include “civic holidays” like Thanksgiving and New Year’s?

Since civic holidays did not exist in Yiddish-speaking Eastern Europe before modern times, all holidays being either Christian or Jewish, a khoge (pronounced “KHAW-geh,” with the “kh” like the “ch” in the spelling Chanukah) was by definition Christian.

The Yiddish proverb “Az m’klingt, iz a khoge oder a sreyfe,” “When it [that is, the church bell] rings, there’s either a holiday or a fire” — or, to put it in more ordinary language, every commotion has its reason — evidences this. In the small towns of Eastern Europe, whose thatch-roofed houses were prone to going up in flames in the dry summer months, the same church bells that called Christians to prayer were also rung as a fire alarm.

In the sense of a Christian holiday, khoge derives from a pun on biblical language. In Chapter 19 of Isaiah, where the prophet speaks of the doom awaiting the people of Egypt, there is a verse beginning, “And the land of Judah will become a terror to the Egyptians.” Although the word translated as “terror,” the Hebrew ḥaga, is found nowhere else in the Bible, “terror” is what Jewish tradition, going back to the earliest sources, has always taken it to mean.

Starting with the end of the Middle Ages, however, we find ḥaga connected with ḥag, the biblical and rabbinic word for a Jewish feast day, which refers in modern Hebrew to a holiday of any sort. The earliest documented instance of this is in a work by the noted German rabbi Ya’akov ben Moshe Moellin (1360­–1427), better known in Jewish tradition as “the Maharil,” in which Easter Sunday is referred to as a ḥaga.

This does not mean that Moellin was the originator of the term as it came to be used in Yiddish; it’s possible that it was current among Ashkenazi Jews before his time. The association of terror with Christian holidays, particularly Easter, was an old one. Anti-Jewish outbreaks often occurred on such days, a particularly dreadful case being that of the Prague Easter massacre of 1389, when Moellin was a young man. In it, hundreds, perhaps thousands, of Jews were killed — some by their own hands, to avoid falling into Christian ones. The pun on the verse in Isaiah was thus an entirely natural one.

A similar and older play on words also foreshadowed it. In the Bible, there are many occurrences of the word eyd, spelled with an initial aleph, in the sense of “calamity” or “disaster,” as in the verse in Proverbs: “He who is glad at [someone else’s] calamity [eyd] will not go unpunished.” In Aramaic as in classical Arabic, on the other hand, the word id, spelled with an initial ayin, means “holiday.” The Aramaic-speaking rabbis of the talmudic period took this word, spelled it eyd and used it to denote a non-Jewish holiday, just as khoge was used centuries later in Yiddish. Whoever coined khoge in this sense, whether the Maharil or someone else, had a solid precedent.

Indeed, there is even a Mishnaic tractate of Khoge. How can that be, you ask, when we have just said that the word in the sense of a Christian holiday is late medieval? True enough — but the tractate in question is a prank. It’s one played by a certain Immanuel Burton, who composed it 15 years ago as a Purim-masekhte, a comical parody of the Talmud of the sort that learned Jews have traditionally amused themselves with on Purim, a holiday celebrated partly by jesting. Burton’s tractate of Khoge, written in an impeccably Mishnaic style, starts with a section on the Christmas tree. Here are its first lines:

“A tree higher than twenty cubits is forbidden in a private home but permitted in the marketplace. One whose height is less than the width of three palms is not acceptable. Rabbi Noel permits bonsai trees; the sages forbid them. Trees that admit more sunlight than they give shade are forbidden. Rabbi Rudolf permits them if the light does not fall where the gifts are hung.”

Beneath this “mishnah,” in traditional Rashi script, is a rabbinic commentary. Regarding bonsai trees, for example, it explains:

“These are acceptable even if less than three palms’ widths in height, such being their nature. This gives them their value — and even though they are useless for the hanging of gifts and serve for decorative purposes alone, Rabbi Noel waives the requirement of gift-hanging so as to avoid shaming the poor [who cannot afford to buy gifts], as is explained below.”

Can not just Christmas, but New Year’s, too, be a khoge in our day and age? I can’t think of any reason why not. Have a happy one.

A Good Season To Live High on the ‘Khoge’