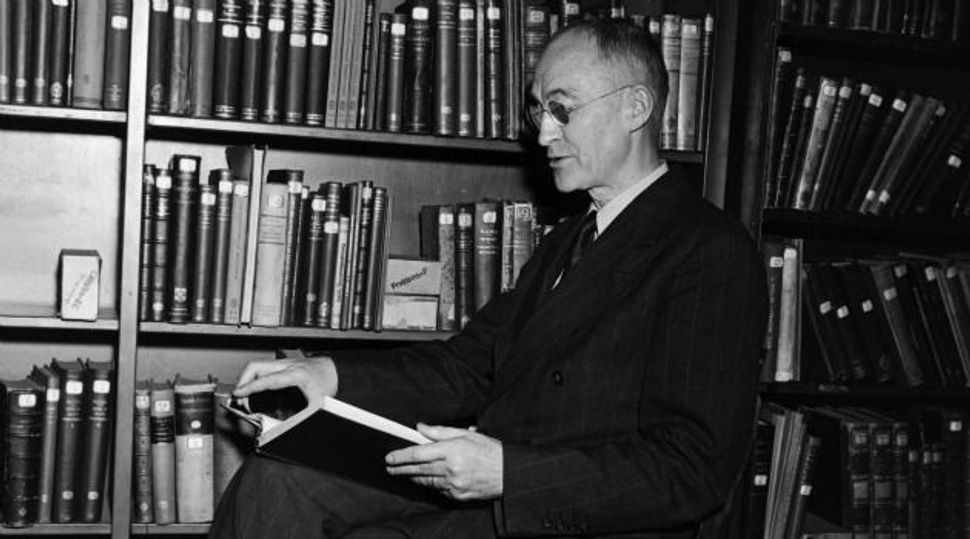 Math Problem: George Birkhoff was instrumental in preventing Jewish mathematicians from being hired at Harvard. Image by Courtesy of Harvard News Office

For over three decades, the math department at Harvard was ruled by a man whom Albert Einstein called “one of the world’s great anti-Semites.” This is one of the key revelations in “A History in Sum,” a new account of mathematics teaching at Harvard published by Harvard University Press. Co-authored by science journalist Steve Nadis and current Harvard math professor Shing-Tung Yau, “A History in Sum” describes how George Birkhoff reigned over the Harvard department from 1912 to 1944. Birkhoff, an American of Dutch origin, was instrumental in preventing Jewish mathematicians from being hired. It may seem counterintuitive that a Harvard professor would shed light on this shameful legacy in a book published by the university’s own press, but Yau is a veteran whistle-blower who has frequently criticized academic corruption and educational abuses in his native China.

Closer to Cambridge, Mass., where he has been based since 1987, Yau notes how in 1934, Birkhoff opposed the candidacy of Solomon Lefschetz, born in Moscow to a mizrahi Jewish family, for president of the American Mathematical Society. Lefschetz was among the many brilliant Jewish mathematicians who did essential work but were never offered a job at Harvard, in part because of Birkhoff’s vehement opposition. In 1934, Birkhoff wrote to a colleague about Lefschetz:

“I have a feeling that Lefschetz will be likely to be less pleasant even than he had been, in that from now on he will try to work strongly and positively for his own race. [Jews] are exceedingly confident of their own power and influence in the good old USA… He will be very cocky, very racial, and use the Annals [of Mathematics, a publication which Lefschetz edited] as a good deal of racial perquisite. The racial interests will get deeper as Einstein’s and all of them do.”

Even earlier, at a 1928 Paris conference, Birkhoff wrote home to his department, detailing why Jews should not be hired and mentioning that he had met John von Neumann, a Hungarian Jewish mathematician of soon-to-be legendary accomplishment. Birkhoff wrote that he found the Hungarian to be a “very attractive young fellow although Jewish.” How were Birkhoff’s views able to hold sway over the Harvard faculty, and why did they dominate the institution for so long?

At a time when America’s Ivy League universities had quotas limiting Jewish students, Birkhoff’s views did not offend as many people as they do today. In a 1994 article in “The Mathematical Intelligencer,” one of Birkhoff’s friends and protégés, Saunders Mac Lane explained, “in many [United States] mathematics departments, it was often felt that mathematicians who were Jewish were too contentious, and were likely to urge the appointment of others like them. These opinions, then or later, are clearly wrong. But they were not limited to mathematics or to universities, but were present in the larger society…”

To their credit, Nadis and Yau do not share in this view of mathematical research as a genteel restricted country club where emotional ethnic types might raise a ruckus. “A History in Sum” unambiguously disagrees with Mac Lane’s conclusions, noting that “there is still ample evidence that [Birkhoff’s] anti-Semitic tendencies went beyond the norms of the era and far beyond the norms in American mathematics at that time.” In 1936, when Harvard President James Bryant Conant needed a university representative to send to the Nazi-controlled Heidelberg University, then celebrating its 550th anniversary, he chose Birkhoff, who happily took part in the the occasion alongside Joseph Goebbels, Heinrich Himmler and other Nazi officials.

Birkhoff’s opinions had disastrous human consequences at a time when lives were at risk, and top scholars were desperate to flee fascist Europe with their families, but could not find American universities willing to hire them. Reinhard Siegmund-Schultze’s “Mathematicians Fleeing from Nazi Germany: Individual Fates and Global Impact” names 18 distinguished German-speaking Jewish mathematicians who were “murdered or driven to suicide by Nazis during the 1930s and 40s” and 72 more who were otherwise persecuted.

Einstein’s was not the only voice raised in protest. In his memoirs, Norbert Wiener, a Harvard student who would later have an eminent career at MIT (an institution also guilty of anti-Semitic hiring practices), declared that Birkhoff was “intolerant of possible rivals, and even more intolerant of possible Jewish rivals. He considered that the supposed early maturity of the Jews gave them an unfair advantage at the stage at which young mathematicians were looking for jobs, and he further considered that this advantage was particularly unfair, as he believed that the Jews lacked staying power.” Wiener further related that as he became more accomplished over the course of his studies at Harvard, he “became [Birkhoff’s] special antipathy, both as a Jew and, ultimately, as a possible rival.”

Paradoxically, Birkhoff was helpful in finding employment at other universities for a select few Jewish mathematicians such as Polish-born Stanislaw Ulam, Italy’s Tullio Levi-Civita, and France’s Jacques Hadamard. The Italian-American mathematician Gian-Carlo Rota noted in an essay, “Like other persons rumored to be anti-Semitic, [Birkhoff] would occasionally feel the urge to shower his protective instincts on some good-looking young Jew.”

Three years after Birkhoff died, a Jew was finally hired to teach mathematics at Harvard. Oscar Zariski (born Oscher Zaritsky in Dobrin, Russia) was an algebraic geometer of immense influence. Thereafter, Zariski attracted a number of gifted Jewish researchers to Harvard, such as Alexander Grothendieck (born in Germany in 1928 and currently living in France), a legendary innovator in algebraic geometry whose father was murdered at Auschwitz. “A History in Sum” rightly suggests that although times have changed at Harvard, sins of the past should never be forgotten. And in a curious twist of fate, a curve first described in Birkhoff’s research has been named posthumously in his honor — perhaps by some waggish researcher — as “Birkhoff’s Bagel,” so that posterity will forever link one of America’s most vehement mathematical anti-Semites with the deli counter.