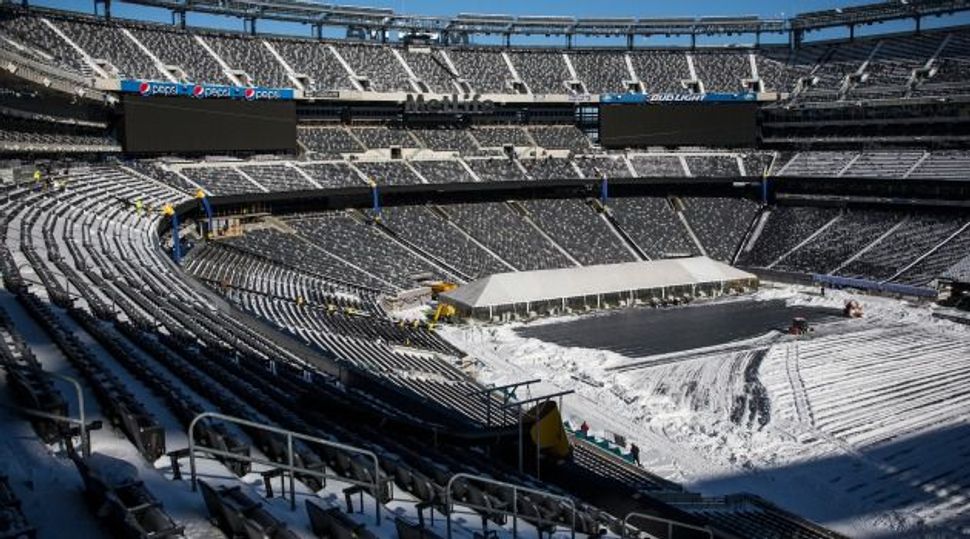 Crowd Control: With an 82,000 seat capacity, MetLife even has prayer areas for those in search of a minyan. Image by Getty Images

It may not be the first strictly kosher Super Bowl, but coming to the New York area for the first time it certainly will have the aroma of a Jewish kitchen in the stadium’s food courts and even the fancier sit-down restaurants and private boxes.

“We will be the greenest and most kosher Super Bowl stadium in the country,” says Bill Lohr, who oversees MetLife Stadium’s food operations as the general manager for Delaware North Sportservice.

MetLife Stadium, across the river in E. Rutherford, New Jersey, is the regular-season home to the Jets and Giants, and thus sells its share of kosher hot dogs (Hebrew National, naturally). And during the season it also sells pastrami and brisket. With more than 82,000 seats—the largest National Football League stadium in the country—there are thousands of Jewish ticket-holders. Indeed, there even are prayer areas for those looking for a minyan.

But at Sunday’s Super Bowl, for those who want the classics of Jewish cooking, there will be more than kosher franks, knishes, and pretzels. Yes, more than pastrami and corned beef. For that crowd of more than 80,000 people will be around for a long time. The gates open at 2 P.M. for the 6:30 kickoff. No tailgating will be allowed. So for those who didn’t bring their own food, the 1.2 million-square-feet stadium will have its food carts, its food courts, its dining at seats overlooking the game and in enclosed heated areas.

“We have a kosher supervisor on site,” says Lohr. “All the carts will have kosher certificates displayed.”

Lohr is enamored of New York City-style food and venues, harkening back to the time of the pushcarts on the Lower East Side and now the ubiquitous food trucks in the city, where you can get everything from a taco to a sushi bento box to a gyro.

The kosher food in the sit-down areas, in places where folks will have spent $2,500 for a single ticket, there also will be stuffed cabbage, egg rolls, franks in jackets, and potato latkes. Peanuts and Cracker Jack? Yes, of course, this is a ball game after all—but when you were a kid did you ever ask for a kosher latke at a ballpark? You can now.

“We know we have more to do with the comfort of our guests once the tickets are scanned than anyone else at the stadium,” contends Lohr. “We know the Super Bowl crowd will be a little more sophisticated because they’ve probably eaten all over the world. The doors open at 2 o’clock and we’ll have them for 10 hours.” It is likely that those who eat kosher at the Super Bowl will make one of the largest one-day dents in America’s $40 billion-a-year kosher food industry.

He has helped set up a menu that reeks of New York. He calls it the “Home Food Advantage,” and besides the array of kosher Jewish food, there are his grandmother’s Italian meatballs as well as much other ethnic munching.

Both Borgia and Lohr have experience dealing with a kosher-only crowd at the stadium. Remember, there was that day in August, 2012, when more than 80,000 Orthodox Jews turned up for the Siyum HaShas, the celebration of the end of a 7 ½-year cycle of Talmudic learning. During the cycle, participants around the world studied one page of the 2711-age Babylonian Talmud each day.

“We did a lot of practicing for that one,” said Borgia.

According to Lohr, the stadium gets the majority of its kosher food from two local vendors. “We don’t have a lot of kosher space so we sublet. Most of the hot food is brought in, so we don’t want anyone to think we’re not properly handling the kosher food.”

The two kosher caterers that provide the food at MetLife are Strikly Kosher (you might have had their wings at Yankee Stadium), and Noah’s Ark, whose website shows former Mayor Rudi Giuliani noshing.

Bringing in the kosher food, and then reheating it, makes life simpler, of course. Although the stadium has a main kitchen as well as 20 supporting kitchens, it is more efficient to serve kosher food this way. All the proscribed rules regarding sterilizing and cleaning of the ovens are followed, and checked on repeatedly.

This Super Bowl, perhaps more than any others outside of those in New Orleans, will show off a city’s taste for food. And no place else is the hot dog—the ubiquitous kosher hot dog—held in higher esteem.