Secret Message on a Bottle in Jerusalem’s City of David 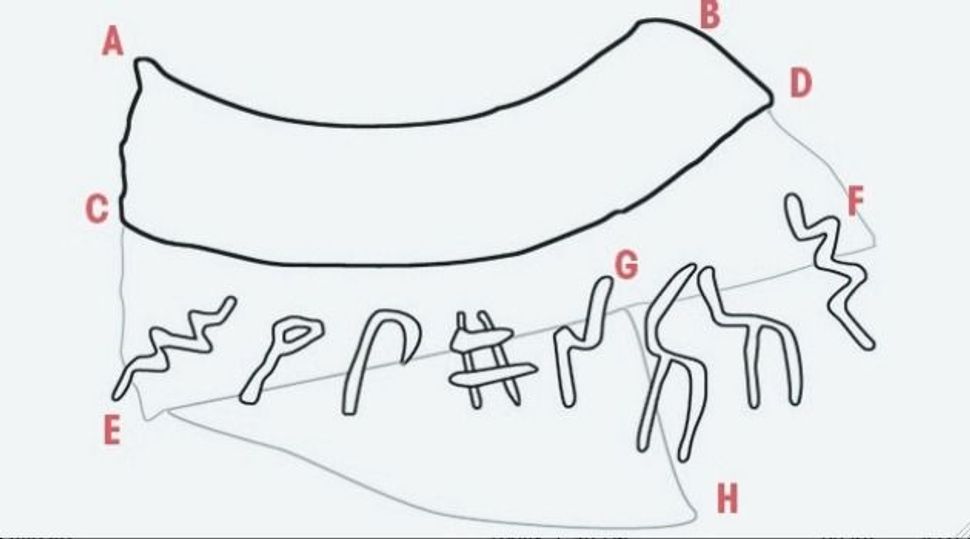 Face the Vase: A rare inscription was found on the broken neck of a 3,000-year-old clay storage jar unearthed in excavations in the ?City of David,? Image by Gershon Galil

A skilled paleographer or specialist in ancient writing can sometimes guess what a mere fragment of that writing is about. A month ago, Haifa University biblical historian Gershon Galil published such a guess in an Israeli journal. If he’s right, not only has he correctly deciphered a puzzling inscription written in the ancient Phoenician/Hebrew alphabet, but he has also made a significant contribution to a long-standing scholarly debate.

The rare inscription was found half a year ago, on the broken neck of a 3,000-year-old clay storage jar unearthed in excavations in the “City of David,” the spur that, facing the southern wall of the Old City of Jerusalem, is now widely believed to have been the site of King David’s palace and administrative headquarters. Dated by archaeologists to the second half of the 10th century BCE, the conjectured time of the reign of David’s son Solomon, this clay shard is sketched in the drawing that accompanies this column. The area ABCD is part of the storage jar’s lip; the break occurred beneath it, along the line EF; a broken-off piece, EGH, was found lying nearby and was reattached; the adjacent piece, GHF, was not found.

The inscription itself is incomplete, part of a longer phrase or sentence that ran around the jar’s neck. Scanned from right to left, its five left-hand letters, intact once EGH is restored, are nun, ḥet, lamed, kuf and mem. The three right-hand letters are missing everything beneath line FG. The drawing shows Galil’s reconstruction of them, which assumes them to be — from right to left again — mem, yod, yod. Based on this assumption, he has proposed a reading of all eight letters.

We’ll get to that in a minute. First, though, you have, or should have, a question. If you look at the drawing, you’ll see that Galil’s two reconstructed yods were found with only their upper tips; moreover, the tip of the second yod *(the third letter from the right of the inscription) is angled more like that of the *nun to its left, and like that of the mem at the inscription’s far left, than like that of the first yod. And in addition, the upper tip of the first yod is angled like that of the mem to its right. What justification, then, did Galil have for reconstructing the second and third letters as yod and yod rather than, say, as nun and mem, or mem and mem, or as still other characters of the Phoenician/Hebrew alphabet?

The answer to this is that Galil thought of something overlooked by other scholars who had struggled with the inscription. Ordinarily, the inscription’s fifth to seventh letters, ḥet, lamed and kuf, might spell in ancient Hebrew, which was written without the vowels, either the adjective ḥalak, “smooth”; the noun ḥelek, “part,” or the verbs ḥalak or ḥilek, “he partook” or “he divided” — none of which suggests anything that might have been written on the neck of a storage jar. But Galil remembered that in Hebrew’s sister language of ancient Phoenician, ḥalak, as an adjective applied to wine, meant not “smooth” but, on the contrary, “rough” or “low-grade,” and this led him to the hypothesis that Hebrew could have had such a word, too, and that the jar was used to store low-grade wine — in which case, the word before ḥalak, composed of the inscription’s second to fourth letters, would logically have been yayin, “wine.” The final nun of yayin already existed; all that remained was to posit that the tips of the two letters preceding it belonged to two yods. Six of the inscription’s eight letters would now be accounted for, while the remaining two, the far-right and left-hand mems, could stand for either the preposition mi, “from,” or be part of some other word.

I’ll leave aside Galil’s analysis of what this other word or words might have been. The important thing is that if his guess is correct, the conclusions he draws from it might well be correct, too. These are that 1) the contents of the storage jar could not have been meant for David or Solomon’s officials, who would have drunk better-grade wine, so it must have been intended for ordinary workers in the palace area; 2) the inscription must have been the work of a clerk entrusted with labeling such jars; 3) a literate bureaucracy capable of carrying out tasks like this must therefore have existed in David and Solomon’s time.

This last point is crucial, because for decades two opposing schools of biblical historians have clashed over the question of whether David and Solomon’s Jerusalem-based kingdom was really the large, powerful and centrally administered mini-empire portrayed by the Bible — and one of the contentions of the skeptics is that no literate bureaucracy capable of running such a kingdom existed in the Jerusalem of David and Solomon’s age. Galil’s hypothesis, if true, would establish that David and Solomon indeed had at their disposal clerks who could read, write and keep records. This could help swing the debate in favor of those who believe that the Bible is to be trusted — and all because of the tips of two yods.

Contents for Philologos can be sent to [email protected]

Secret Message on a Bottle in Jerusalem’s City of David