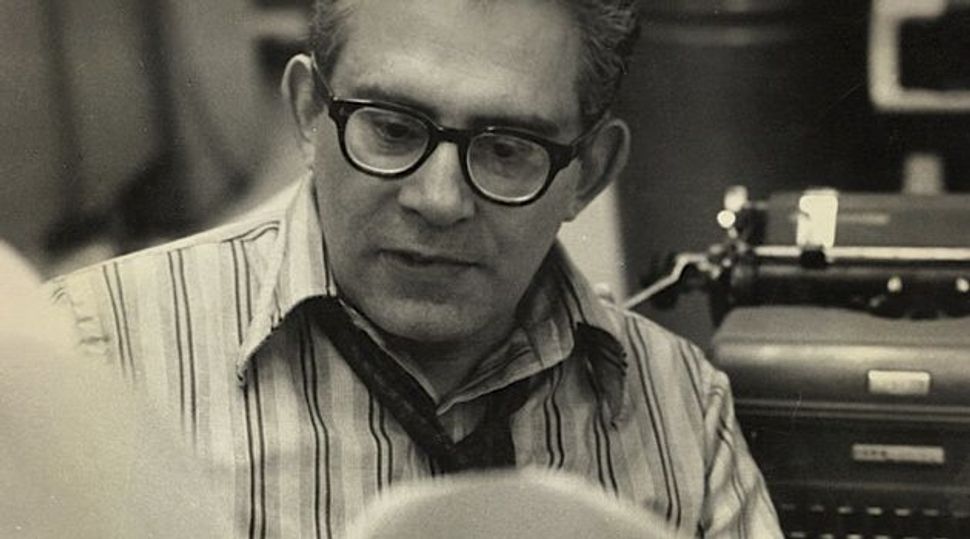 Rosenfeld & ?Woodstein?: At age eighty, Harry Rosenfeld, who oversaw the Washington Post?s coverage of the Watergate scandal, took a break from work to confront the one deadline no human can escape – and wrote his memoir. Image by Excelsior Editions

If you’re lucky and smart, life as a newshound means that your day job consists of being a semi-ordinary person thrust into extraordinary circumstances. You invariably sidle up to history — and its makers — just by showing up for work.

As a boy growing up in Hitler’s Berlin, Harry Rosenfeld, author of the new memoir “From Kristallnacht to Watergate,” saw his father grabbed by the Gestapo in a middle-of-the-night raid. He was there for the shattering and the burning of Kristallnacht.

Rosenfeld carried with him a deep sense of outrage and justice on his journey as the longtime newspaperman who, as metropolitan editor at the Washington Post, played a key (and often cranky) role in overseeing Bob Woodward and Carl Bernstein’s historic Watergate coverage. In his book, Rosenfeld offers what Woodward himself blurbs (on the book cover): “real history, illuminating and told honestly with a deep sense of the moral obligation of the press.”

Not to be out-blurbed, Bernstein, the rougher half of the team known as “Woodstein” that takes up much of Rosenfeld’s narrative, opines in his back-jacket quote: “Rarely has a newpaperman’s personality and experience intersected so perfectly with his time.”

Harry Rosenfeld is what we’d call a stiff (thank God), a champion of old-school investigative reporting and fact-driven news, and a man who holds deeply to the belief that good journalism is key to our democracy.

Though not widely known outside the Beltway old-school newsiverse, within the family, Rosenfeld is widely and deeply respected. He is known as a stalwart, a stickler for fairness and accuracy.

I have never met him, but as a recovering daily metro reporter I can say that he’s the kind of guy who makes you want to throw your shoulders back, push the hair outta your eyes and get your damn facts right. He’s no show-off. In fact, he’s more of an avuncular old prof. He introduces a section on Watergate by stating, “My only valid contribution to elucidating the thoroughly worked-over ground is to relate what I remember witnessing and my interpretation of events as Watergate unfolded. What follows pretends to be no more, and it is no less, than my insider’s view of that momentous story.” And that’s just what you get: how Woodward and Bernstein didn’t much like or trust each other at first; how Rosenfeld gave Woodward his big break and why; what Rosenfeld regrets about Deep Throat; Bernstein’s quirks; what editors knew and when they knew it; juicy behind-the-scenes disagreements about Watergate coverage.

He’s clearly on Team Woodward, whom he writes had “a sober personality and was a solid adult.” He took criticism well and cultivated sources with aplomb. The wild and wooly Bernstein, on the other hand, “hungered for the big story,” racked up insane amounts of “self-assigned” overtime, and was on thin ice just before the Watergate story changed everything.

There’s an element of “it’s my memoir and I can write what I want to.” He names colleagues who pissed him off and why. He’s not above noting when he didn’t get credit for something but should have. He even ends one such anecdote with “so there.”

Luckily for the reader, much of the score settling is fun to read. There are also choice bits about his family life — during the height of Watergate, Rosenfeld’s daughters “became accustomed to answering the office extension and our private phones in our home by saying, ‘Hello to anyone listening.’”

One of the great comforts that comes from reading “From Kristallnacht to Watergate” is knowing that Rosenfeld is still in the game. He is now editor-at-large and a consultant at the Albany Times Union. He took a break from writing his column to work on this memoir. “I was eighty,” he writes, “and had to confront the deadline no human can circumvent.”

A former reporter for the Chicago Tribune, Pamela Cytrynbaum is now the executive director of The Chicago Innocence Project.