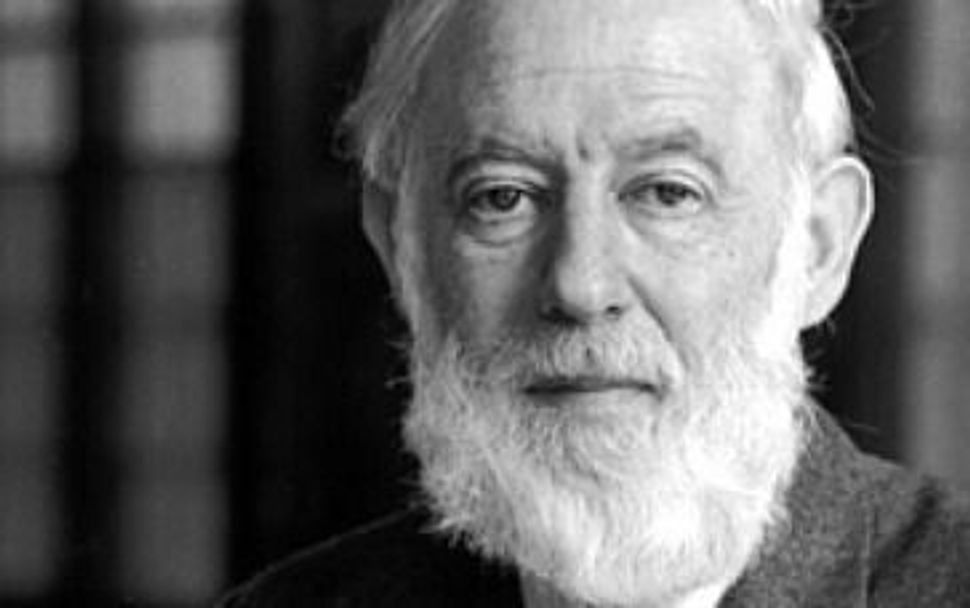 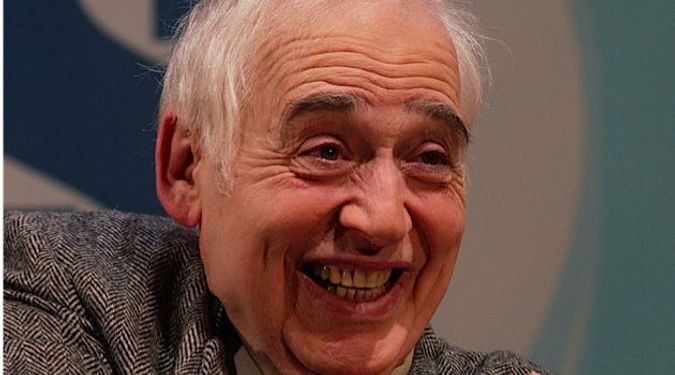 Bloom of Poetry: Harold Bloom once asserted that there could be no major Jewish poet in English, because no Jewish poet could get close enough to his or her Protestant forebears. Image by Getty Images

‘What does it mean to be a Jewish American poet? Posed as baldly as that”— so wrote the poet and critic Norman Finkelstein in 2001 — “the question is impossible to answer.”

We can, however, ask what answers individual poets and poems imply. What would make a modern American poem (not the author but the poem; not the poem’s topic, but the poem itself) Jewish? We can list qualities, some mutually exclusive: terms, words and phrases from Yiddishkeit, or from a broader range of immigrant experience; allusions and quotations from the liturgy and from the Tanakh; traditions of Catskill, or Hollywood, or gallows’ humor; aniconic qualities, a refusal to visualize whatever is sacred; apparently endless argument, illimitable interpretive dispute; questions that lead to questions, without fixed answers; urbanity; dispossession; this-worldly commitment to social justice; self-conscious reaction against any, or all, of the expectations above; allusion to earlier Jewish American poets, such as Charles Reznikoff or Adrienne Rich; dialogue with the literature, the land and the actions of Israelis and Palestinians.

We can find most of these qualities, if we look for them, in the recently released “Bloomsbury Anthology of Contemporary Jewish Poetry,” but we might have to look hard. Hardly the first book of Jewish American poetry, it seems to be the first to gather only contemporary American poets (born after 1945), 112 of them (myself among them), most with one or two poems apiece. They make an enthusiastic, sometimes disorganized crowd. Through the pages tromp baby boom versions of ethnic history, marked by foodways and by popular culture: “raspberry-swirled, rugelach… now an eaten memory”; “Oh, to have been Koufax!” But there are less predictable entrants, too. In the title poem from his first collection “Dancing in Odessa,” Ilya Kaminsky ) remembers and scrambles his youth, and his ancestors’ youth as well:

My classmate invented twenty names for Jew.
He was an angel, he had no name,
we wrestled, yes. My grandfathers fought
the German tanks on tractors, I kept a suitcase full
of Brodsky’s poems. The city trembled,
a ghost-ship setting sail.

Crowded with polyglot echoes, Erika Meitner’s “Yiddishland” is the best of the poems that treat Ashkenazi ethnic heritage: “The people who sang to their children in Yiddish and worked in Yiddish/ and made love in Yiddish are nearly all gone. Phantasmic. Heym… When my sister finally pulls back the sheet. all the things/ my grandmother was barely fit on the face of the marker.” Meitner does rare justice to the idea that being Jewish, or being a Jewish writer, can never mean only one thing.

Finkelstein (not to be confused with the political scientist of the same name) has argued that Jewish poetry negotiates between a history that can be retold in secular terms and a ritualized, or repeated, sacred memory. We can hear both sides of that debate in Arielle Greenberg’s harshly vivid “Synopsis,” whose character seems to be reborn throughout history:

I hid under a trapdoor in Spain, crying half-language.
Coveting, coveting, yes, no, like a jezebel on a rooftop terrace.
I eat nothing containing cartilage.
The oven is full of rock salt.

Greenberg concludes by remembering Jonah, that fugitive from the divine and from history: “I hid from God and was found.” Jewish history occurs more often, to these poets, than Jewish ritual, but the latter occasions fine lines: For Nomi Stone, the pause of Shabbat reveals “those stars/ behind the stars you recognize.”

“What is a Jew in solitude?” asked Rich in her poem “Yom Kippur, 1984.” No Jewish writer, her poem reminds us, can write as if she were the first one. It is one of the few claims about Jewishness on which Rich and Harold Bloom clearly agree: In his notorious 1972 polemic “The Sorrows of Jewish American Poetry,” Bloom asserted that there could be no major Jewish poet in English, because no Jewish poet (and presumably no Muslim or Buddhist) could get close enough to his or her Protestant forebears to become a great poet by breaking away.

No serious critic would make that claim today, but many critics might agree with another of Bloom’s declarations: “Nothing is more self-deceptive,” he wrote, “for any Jewish writer than the notion that he (sic) can define the Jew.” We have been talking and writing for too long, arguing over too many conflicting definitions for mi yehudi, “who is a Jew?” for anyone now to have the first, or the last, word. Instead, to write in a particular Jewish tradition means to notice the writers and the teachers, the professors, the mothers and fathers — if not indeed the prophets, and the musicians, and the comedians, and so on — who have already been there.

By now many poets have been there: Reznikoff, Muriel Rukeyser, Rich, George Oppen, Allen Grossman — all may be taken as models by one or another young poet, though nobody could imitate them all at once. No earlier poet stands closer to editors Deborah Ager and M.E. Silverman’s crowd than that poet at once of American civics and of Jewish family life, Robert Pinsky (himself born in 1940, just a few years too old for the anthology). Pinsky’s litanies give Meitner one model, and his half-comic tone and his collages lend Lisa Gluskin Stonestreet another. Stonestreet’s “De Profundis” begins with the Psalms, then shifts course: “out of the depths I cry to you, O Lord/ —more like out of the middle, the soft/ chewy center.”

Nor is Stonestreet alone in relying on humor. Charles Bernstein became famous in the 1980s for his prankishly difficult, frustrating avant-garde poetry. Jennifer Michael Hecht, who wrote a whole book of poems about jokes, riffs on the one whose punchline is “I sent three boats.” Anomalous among all the clear, short, personal poems is Stephen Paul Miller’s twenty-page comedic narrative, “There’s Only One God and You’re Not It.”

Ager and Silverman favor a democratic accessibility, both in selecting so many poets, and in which poets they chose. (Readers of the Forward may be surprised not to see Adam Kirsch; I missed David Caplan, Ben Friedlander, Rachel Hadas, Aaron Shurin, Marsha Pomerantz and Craig Morgan Teicher — all of whom may have been asked.) Headnotes highlight the contributors’ Jewish lives. Some point to other accomplishments: Rachel Barenblat, for example, is also the blogger known as the Velveteen Rabbi. Other headnotes omit relevant facts: Yehoshua November’s does not say that he is hasidic and devout, nor does Esther Schor’s tell us that she wrote a biography of Emma Lazarus. The casual, talky quality seems less a Jewish quality than reflective of much contemporary verse, or at least the verse that Ager and Silverman most often see. Most of these poets make prose sense; some could be memoirs.

Others make stranger demands. Finkelstein’s own austere “Allegory of the Song,” for example, sees poetry as “the stateless one, begging and bluffing,” an eternal refugee that “is not quite a person”; its “losses were tallied long ago.” The Jewish poem there stands for Jewish styles of thought — always investigating, never satisfied — and for the unfulfilled promise of Jewish history, all too aware of what it must run from, arguing over what it can run towards. Right at the end of the “Bloomsbury” alphabet, Matthew Zapruder concludes his poem “Aglow” inconclusively, in multiplicity, as inquiries about what makes a poetry Jewish ought to conclude: with “hidden pleasure,” “in search of the question/ that might make you ask me one in return.”

Geoffrey Hartman was born too early (in 1929) to appear in “The Bloomsbury Anthology,” but he, too, belongs with the traditions that it collects. Hartman, who taught for decades at Yale, retains at least three towering reputations, as a great interpreter of the romantic poets, as a literary theorist, and now as curator, interpreter and director for Yale’s Fortunoff Video Archive for Holocaust Testimonies. Hartman is also a writer of serious poetry, almost all of it linked to Jewish thought.

Even when his poems acquire contemporary settings, Hartman speaks for biblical figures, starting with Abraham, moving on to the prophets (“Let him be called/ Ichabod, for the Glory departed”), and jarringly importing “Ahasuerus” from ancient Persia to a landscape that can only be seen as post-Holocaust.

If many of Ager and Silverman’s poets hew too closely to conversational, contemporary English, Hartman can wander too far in the other direction. Seeking the prophetic, he can wind up merely unidiomatic: “You that would mysticate, pity me, shun his fate!” His poetry works well when least vaunting, able to speak for modern disillusion: Appalled by “A Holy City” that must be Jerusalem, Hartman sees there “enough blows to unlock the eastern gate,” “enough hills to slaughter your only sons.” What is best in Hartman’s poetry might be its awareness of the multiple traditions, the multiple arguments — about the land of Israel, about vision and revelation, about the status of English and Hebrew and free verse and meter — in which it cannot help but participate.

If you want recent poets who have not only joined but also guided those arguments, you can look to Rich or to Pinsky, to Bernstein or to Grossman, or to the recent book-length projects of Finkelstein. You might also look to John Hollander, Bloom’s and Hartman’s longtime colleague at Yale, and the one who — so Bloom said in print — came closest to the greatness Bloom pronounced impossible. Bloom praised Hollander’s book-length sequence “Spectral Emanations,” modeled on the seven-branched menorah. Other readers prefer Hollander’s uncommonly learned comic poetry, with its puns in Hebrew, Yiddish, French, Greek, Latin, English, its knowledge of theology, of allegory, of stage routines. Hollander’s “Cohen on the Telephone” is a tour de force of double meanings: playing on Hebrew bat kol, ) Hollander says that the poetic voice

is Ben Cole, the son of your voice,
Questioning along the deep cables,
Sad and nasal even in his yeas.
And once connected to chaos, then
What engulfs you is the babbling of
The multitude of your descendants
Who clamor for a hearing now, not
Then, begetting echoes of themselves…
The next voice you hear will be your own.

Stephen Burt is a poet, critic and professor at Harvard University. His latest book is “Belmont” (2013).