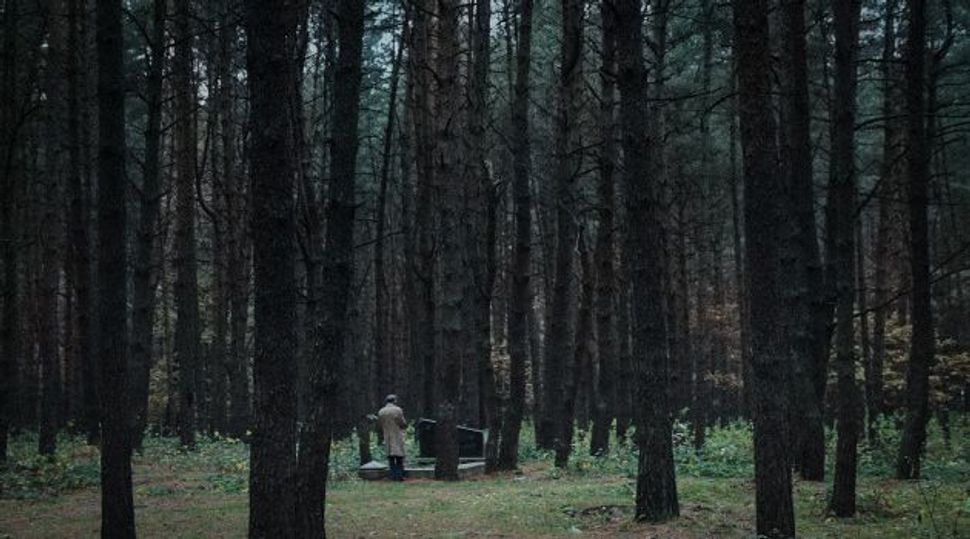 Sacred Ground: Boris Dorfman stands in a forest in Ukraine where the last surviving Jews from the Lviv Ghetto were murdered. Image by Marek Gajczak

During an emotional scene in the new documentary film “Boris Dorfman: A Mentsh,” the 90-year-old Dorfman stands in a forest near Rudno, Ukraine, at the spot where the Germans murdered the last surviving Jews from the Lviv ghetto in June of 1943.

Near a memorial-marker that he helped to install in 2008, Dorfman addresses the Jews who were killed there, telling them that he did not come alone, but with people who would help to tell the story of Jewish Lviv and the tragedy that befell it. Afterwards, he asks the dead to rest in peace and beseeches the film’s viewers to remember the Jews of Lviv.

For Uwe von Seltmann, who directed the film alongside his wife Gabriela, this was a holy moment. In a conversation with the Forward, Seltmann explained that he first met Dorfman in 2001 while visiting Lviv to pursue a longstanding interest in the culture of Galicia and Bukovina, Ukraine. At the time, Dorfman was leading Jewish heritage tours for tourists that visited sites around Lviv.

“Back then, in 2001, Lviv still looked very Soviet,” he said. “Despite that, however, I could sense that the city had been different from other cities in Ukraine due to the Austrian architectural influences as well as the Polish influences. I fell in love with Lviv and the surrounding region as well as with the Yiddish language. I knew the Yiddish writer Josef Burg, who was a friend of Boris’s. Burg used to call him a mentsh. And that’s how the film got its name.”

For the past 14 years, von Seltmann has traveled to Lviv a few times each year, and during every trip he has met with Dorfman. During these visits he learned about Dorfman’s life history. Born in the shtetl of Kagul, in Bessarabia, Dorfman survived World War II in Siberia, where he worked as a coal miner. In 1950, he settled in Lviv.

Though he is an engineer by trade, Dorfman contributed news articles and essays to various publications in Russian, Ukrainian and Yiddish. He co- founded the Lviv-based Yiddish newspaper Shofar, and was a frequent contributor to the Birobidzhaner Shtern, the Jewish Autonomous Region’s official Yiddish newspaper. After the Soviet Union’s collapse, Dorfman became a tireless communal activist for Jewish causes, taught in the local Jewish school, and helped to maintain Jewish cemeteries and memorials in Lviv and surrounding towns.

Because Dorfman is the oldest Jew in Lviv and the last Yiddish speaker there, the von Seltmanns had wanted to make a documentary about him for a long time. In September 2013, the couple was in Lviv for the city’s annual klezmer festival when Betia Dorfman, Boris’s wife, told them that she was worried about her husband. After turning 90, he had begun to feel that there was nobody left to continue his work and that everything he had done to preserve Lviv’s Jewish heritage had been for naught.

“That’s why we decided then that we needed to begin filming right away,” Uwe von Seltmann explained.

“The idea was that a person who speaks no language but Yiddish would be able to understand everything in the film,” said von Seltmann. “So when Russian is spoken, there are Yiddish subtitles; the credits and the written explanations are also written in Yiddish. It wasn’t easy but we made it happen.”

Von Seltmann’s decision to make a “radical Yiddish film” was not just a whim of fancy but also a calculated decision stemming from his own complicated roots. Born in West Germany in 1964, his history with Yiddish began as a teenager when he heard recordings of Yiddish folksongs sung by the popular German band Zupfgeigenhansel. At the time, he had no other connection to the language or culture.

He had known that his father was a German orphan who was born in Krakow, Poland, but nobody would ever tell him more about his father’s roots. Due to his father’s connection to the city, however, von Seltmann had a close affinity for Krakow from a young age.

In 1999, after meeting an elderly English Jew in a synagogue in Krakow, he decided to investigate his roots and discovered that his paternal grandfather was a high-ranking SS officer who worked with Heinrich Himmler and was active in Krakow and Lublin, Poland, as well as in Warsaw, Poland, where he helped to suppress the Warsaw ghetto uprising. He vanished after the war, having apparently committed suicide after Germany’s defeat.

After reading through the letters that his grandfather had written during his murderous years in the SS, von Seltmann began to write about him, as well as about how his grandfather’s existence was a topic that could not be broached in his family. The resulting book was entitled “Schweigen die Täter reden die Enkel” (“If the Perpetrators Won’t Speak Their Grandchildren Will”).

In 2006, he attended the Jewish Culture Festival in Krakow. He was sitting alone in Café Singer in the city’s historical Jewish quarter, Kazimierz, when a group of strangers invited him to their table. “I spoke to them in my strange mixture of Ukrainian, English and Polish and told them that I had written a portion of my book in Café Singer. After telling them what the book was about, a woman told me that her grandfather had been murdered at Auschwitz. We stayed in contact and became engaged a year later.”

Together, the couple wrote a book about their relationship and their families’ roots. “I researched my grandfather’s life so I had to research my wife’s grandfather’s life as well,” Uwe von Seltmann explained. “But after working through our personal histories we were free to do other projects. And so we came to work on the film about Boris Dorfman.”

As fate would have it, von Seltmann is not only descended from a murderer of Jews but also from Jewish ancestors on both sides of his family. “One part of the family converted to Christianity; they survived. The Jews were all killed at Auschwitz and Sobibór,” he explained in an email. “It appears the Kabbalistic idea of the ‘Gilgul’ (reincarnated soul) is working.”

Uwe von Seltmann adds that his romance with the Yiddish language has not yet played out. He and his wife are planning to make two more documentaries about Yiddish speakers, this time in New York and Tel Aviv.

Jordan Kutzik is a staff writer for the Forverts.