Why Do Jews Meditate? It’s All in the Worrying! 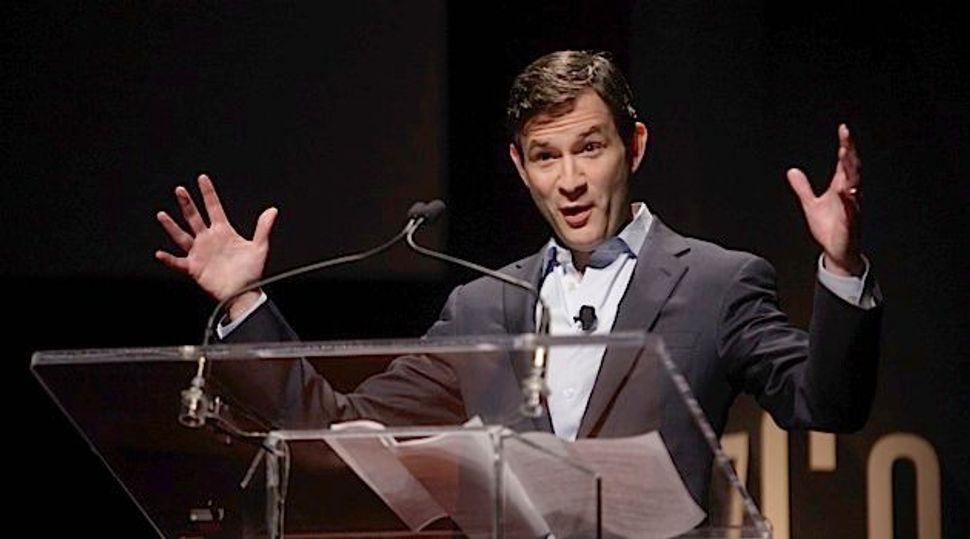 Not Quitting His Day Job: Dan Harris still works as an anchor for ABC News. Image by Getty Images

Dan Harris already had a lot going for him: He’s co-anchor of ABC News’ “Nightline” and “Good Morning America,” and a respected journalist. Now he’s also a best-selling author, with his recent memoir-cum-report on meditation, “10% Happier.” The book, subtitled “How I Tamed the Voice in My Head, Reduced Stress Without Losing My Edge, And Found Self-Help That Actually Works,” was recently sitting atop the New York Times bestseller list. Harris and I have known each other for a while, comparing notes as two BuJus (although Harris hastens to note that he’s “only” half-Jewish and culturally Jewish) trying to balance the contemplative life and a full-time career… or two. We sat down at a noisy New York coffee shop to schmooze about enlightenment, meditation, and the “Allen Spectrum” of Jewish stress.

Jay Michaelson: First of all, congratulations! The success of “10% Happier” is really remarkable. How does it feel?

Dan Harris: My wife Bianca and I used to joke, when I would step away from whatever I was doing to work on the book, that I was going to work on the worst book ever written, or go work on this book that nobody will ever read. It was kind of a running joke. And so when it started to do well, I was very surprised. I will say that the Buddhist law of suffering is still very much in effect. I got that first call, saying I hit No. 2 on the bestseller list, and I was like, “Oh that’s great!” And then the next thing I thought was, “Why am I not No. 1?” That’s the thing about hedonic adaptation: You bake the good stuff in your baseline so quickly. I catch myself doing that a lot, and trying to get back to my initial reaction, which is: “Wow, I can’t believe this is happening; it’s amazing.” If you’d asked me before the book came out about having a bestseller, I would’ve told you that you were crazy.

So tell me, from one BuJu to another, why are all of your role models nice Jewish men (and one woman, Sharon Salzberg)?

I think it’s remarkable that among the people who have popularized this practice, that there is such a preponderance of Jews. I’ve asked them about this, and what you might think is the most obvious answer is not always the answer they give. I would think it’s because of the proclivity toward anxiety among Jews — you know, the Woody Allen thing.

But that’s always the third or fourth thing they list. One thing they say is that a lot of these guys came from secular homes, and there was a kind of spiritual hole, and they were looking for something that wouldn’t require them to believe in something supernatural. But to me, it’s because these guys are worriers, and ambitious people, and this seems to take the edge off of it.

That does seem to be your narrative in the book.

One hundred percent. My dad was, and is, a worrier. And I saw him harness that to further his career. But he was also, I would say, on the spectrum of the cliché of the Jewish worrier, a Woody Allen type, and I definitely adopted a lot of that. I’m on the Allen Spectrum.

Of course one difference between you and this older generation of teachers is that they really got off the treadmill. You’ve stayed on.

That’s true. And they also got in so young — like 18, 19. Also, in [noted meditation teacher] Joseph Goldstein’s case, he got interested very early on in enlightenment.

I’ve noticed in the book, and in our conversations, that you’re a little hung up on that issue. Why is that?

It seems like a fantastical claim. Maybe I’m just buying the cartoon version of it, but the word enlightenment is a pretty freighted term, and associated with metaphysical claims. On the other hand, the Buddha certainly got upset when his friends died, and he didn’t like it when he got a rock in his shoe, and he was sometimes in a bad mood. Mark Epstein once described the suffering of an enlightened person as being like getting punched in the face while you’re on heroin. It hurts, but a lot less. So maybe my hang-up on enlightenment is partly based on this misunderstanding of what it is. But having said that, now I am interested in enlightenment.

Well, part of that came from reading your book [“Evolving Dharma”], and learning there is this idea of a progression, and that you can have these experiences, and there are maps of progress — I find that really interesting, and I am really curious about it.

Well, thank you. And yet, it sometimes feels to me like your book is more Jewish than all these BuJu books, precisely because it’s about having it all, about being 10 percent happier, but staying in the world and not losing your edge. To me, the Jewish ideal of enlightenment is not someone withdrawn from the world but a householder with a family — and so it’s very much push and pull. The sages have their times when they’re having spiritual experiences, and the times when they’re not. Whereas the traditional Buddhist view is more about leaving that world. So it does seem that you, and Jon Kabat-Zinn and others, are creating a householder meditation practice with more modest ambitions. Does that feel right?

That does feel right. I don’t know enough about Judaism to know about the Jewish conception of enlightenment, and I think of myself as Jewish in a cultural way. But definitely, suffering and stress and pain are part of being ambitious. You’ve got to accept that. But you don’t have to make it worse than it needs to be. Meditation is for helping you see the line between constructive anguish and ruminating. It also helps me derive a lot of pleasure from the important stuff. It feels good to be in good relationships with good people, or even just to hold the door open for somebody. And when you see that on a moment-to-moment basis, it makes a big difference.

But if you get a serotonin boost from holding the door open, doesn’t that reduce your drive to get serotonin from scoring the big story? You have to work really hard to be the best, and as you know, most really successful people are miserable. I wonder, if you don’t have such a big hole to fill, maybe you won’t go the extra mile.

I won’t rule it out. It is possible, but it is also imponderable. I do know that I have a huge drive to succeed. I mean, there was something yelling in my head when I was No. 2 on the bestseller list of “Why are you No. 2?” So that is still there — but I laugh at it a lot more.

Jay Michaelson is a contributing editor of the Forward and author of “Evolving Dharma.”

Why Do Jews Meditate? It’s All in the Worrying!