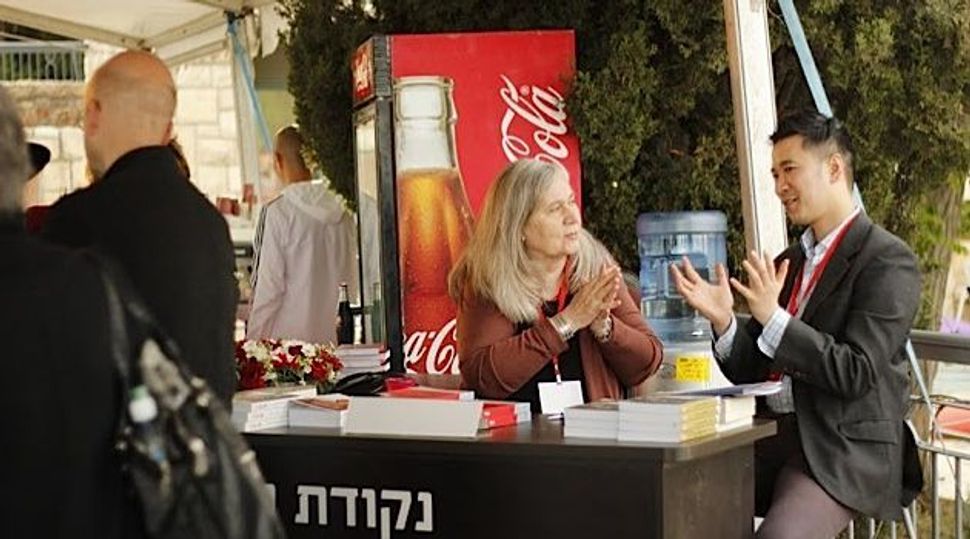 Marilynne Robinson is the Pulitzer and Orange Prize-winning author of the novels “Housekeeping,” “Gilead,” “Home” and the forthcoming “Lila.” Not long before hostilities broke out in the region, she attended the fourth annual International Writer’s Festival at the Mishkenot Sha’ananim cultural center in Jerusalem. Robinson is a committed Christian who grew up Presbyterian and now worships at her Congregationalist church in Iowa City, Iowa, and throughout her writing career has been fascinated by biblical themes and landscapes.

“But what must Galilee have looked like?” she wrote in “Gilead.” “You can’t tell so much from the appearance of a place.” The Forward’s Beth Kissileff talked with Robinson about her feelings about seeing Israel as a tangible landscape, how she felt at the Church of the Holy Sepulchre in Jerusalem, the astonishment she experienced at seeing the core of her religion in Israel, and how her trip will inform her future writing.

BETH KISSILEFF: I heard that you had a wonderful trip to Israel and were dying to talk about it. Tell us what was so wonderful about it.

MARILYNNE ROBINSON: Israel is so full of places with centuries of accumulated associations that to be there is a unique experience. So much of civilization alludes to the history and literature of that part of the world that to have even a glimpse of it is extraordinary and moving. Also, the graciousness and hospitality I met with were wonderful.

Do you think your trip will affect your writing in some way, and if so how?

A fair amount of the writing I do is theological. I think it will change my thinking inevitably to have a better sense of the ways in which the language and the concepts I deal with are rooted in tangible history and in a very distinctive landscape.

A sense of place informs your work so strongly. How was it to be in Israel, a place where religion is in the air? The Talmud actually states that “the air of the land of Israel makes one wise.” Tell us a bit about what you experienced here.

It was moving to see all the different forms of piety focused, concentrated in an area so defined. I suppose a time when the religious significance of the place was not yet felt can be imagined, before Abraham, perhaps. But the extent to which it has supplied humankind with a conceptual universe of value and meaning and holiness is an astonishment. That it is somehow profoundly exceptional is true without question

You wrote in “Gilead,” “Do you ever wonder why American Christianity always seems to wait for the real thinking to be done elsewhere?” Do you find that as well? How was seeing Christianity in its birthplace for you?

Yes, I think it is part of our endless colonial mindset that we wait for ideas, especially about philosophy and theology, to come from Europe. Then when they arrive they are not quite assimilable to our own assumptions and values — though this is never acknowledged. People try to adapt to them, which suppresses original thought, and then a new idea drifts in, the older one is half-abandoned, and on it goes. We are a very religious culture with a fundamentally sterile academic theology. The intellectual fads we generate here are usually cranky objections to the fact that the Bible is not agreeable in every detail to our wildly untypical lives — that it is sometimes better suited to the experience of the many hundred generations who have lived and died before us. Israel, and especially Galilee, does call to mind the core of it all, simple and inexhaustibly deep, like most lives.

What did you think of the religion you saw in Israel, both your own and that of others?

I was struck by the sectarianism that governs the Church of the Holy Sepulchre. Not that this is unusual anywhere, among the followers of any religion, sad to say. Belief in God, in the sacredness of human life, in a moral order that answers to the will of God — these are huge assumptions the religions share. We ought to respect one another on this basis, rather than discrediting religion altogether by seeing every difference as a provocation. I am in situations often where I am asked to make a case for religion. Science is no problem, secularization is no problem. The bad behavior of religious people using religion as a pretext is an overwhelming problem.

Home and ideas of home are central to your work. Do you have any comments on what the sense of home means in Israel?

There are many places in America settled by people who wanted to establish a spiritual home — Amish or Quaker or Catholic, German or Czech. There are, of course, American Jewish communities committed to varieties of Orthodoxy. Americans have often brought home with them, to live as they could not live in places that were home in a more conventional sense. Israel has been the idea of home to Jews for ages — meaning refuge and kinship, as Americans do when we use the word, though for us the refuge is only psychological and emotional. Often home is the basis of whatever comes after it, the place where one emerges as oneself. There is a power in the people and places and things that we encounter in our earliest experience, and the coherence of a life is bound up in remembering or revisiting them. Israelis who have come from Russia or France would feel about Israel differently than my own sense of home allows me to imagine.

The word “preacher” comes from an old French word, prédicateur, which means prophet. Obviously, there are many troubles in Israel. Though a writer is not a prophet, what kinds of meaning do you find in those troubles?

The meaning I see, more intensely in Israel than in many places but very generally in the contemporary world, is that human beings are brilliant and profound and a terrible threat to themselves. I know that not all the traditions that revere Genesis find a doctrine of original sin in it. I must say, I do. History illustrates so endlessly how much terrible, unaccountable harm we inflict on ourselves. Israel now seems to me to be dealing with an accumulation of choices and actions on all sides, some made in other places and centuries, that have made a situation beyond human wisdom to resolve. The best approach seems to be one I see in many people there and elsewhere, to act in good faith, with good grace, in every circumstance that calls on them to act. But these overcharged situations excite people who are foolish or unstable or extreme, and they compound every difficulty no matter what most people hope or intend. I concluded some time ago that the world goes on by the grace of God — that nothing else can account for our immunity, relative as it is, from the consequences of our own nature.

The BDS movement to boycott Israel is gaining strength in some places. The American Studies Association and the Modern Language Association, which I imagine you or your colleagues may belong to, both urged boycotts. What do you think of these positions, particularly now, having been to Israel? Did you get any pressure not to come, and if so from where?

I don’t believe in boycotts as a general thing. Boycotts that curtail cultural contact seem to me to be especially ill considered. They encourage people to forget the humanity of those from whom they alienate us. I have seen spectacular instances of this in my lifetime. No one doubts that important change is necessary in Israel, and that for modern historical reasons injustices there are especially apparent. But countries that don’t or won’t solve their own problems are not likely to have the wisdom to solve others’ problems. Perhaps these organizations have done things I am not aware of in the direction of promoting immigration reform or opposing the easing of gun laws. Certainly these problems have only grown worse in recent years, at the cost of much innocent suffering. They seem on their face at least as accessible to solution as the situation in Israel. In any case, I was hardly aware of the boycott. I was certainly not pressured to stay home.