Remembering More Than a Century of Bel Kaufman’s Rebellious Charm 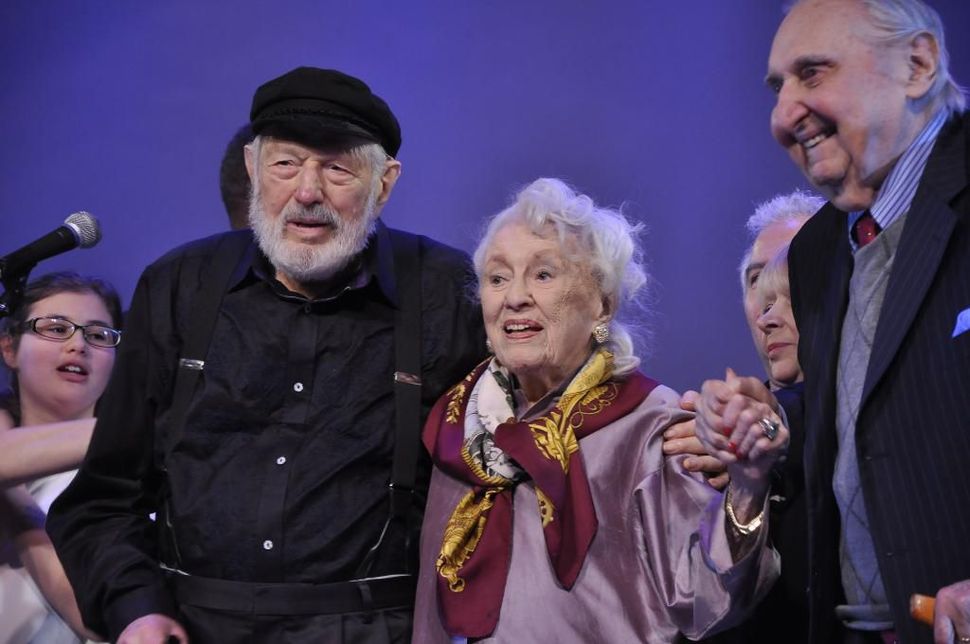 Bridging the Centuries: Bel Kaufman, seen here with Theodore Bikel, was the author of ‘Up the Down Staircase’ and the granddaughter of Sholem Aleichem. Image by Courtesy of Folksbiene Theater

Bel Kaufman, who has died on July 25 at the age of 103, once told an audience at Iona College in 2011: “You’re laughing. It’s a very good sound, the sound of survival.” Born Bella Kaufman in 1911, she is best known as author of the 1965 bestseller “Up the Down Staircase” a fictionalized version of her life as a young schoolteacher who survived bureaucracy. Kaufman was also celebrated as granddaughter of the great humorist Sholem Aleichem. Like her grandfather, her writings treated stark, even tragic subjects with biting humor and rebellious charm. As Kaufman informed the Jewish Channel in 2011, the Broadway musical “Fiddler on the Roof,” while highly accomplished, “has nothing to do with Sholem Aleichem. Tevye was a tragic character in Sholem Aleichem’s stories. The shtetl was not the beautiful setting that you saw on the stage or screen. Life was very difficult.”

Raised in Odessa and Kiev, Kaufman, who would remain fluent in what she termed “the Czar’s Russian” into old age, was early exposed to social torment and turmoil, as well as a rich cultural life surrounding her family. Her mother Lyala Rabiniwitz would later publish short works in the Yiddish Forverts. Visitors included the poet Chaim Nachman Bialik, the Hebrew and Yiddish author and editor Yehoshua Hana Ravnitzky (1859-1944), and the writer and early Russian Zionist theorist Ben-Ami (Mordechai Iakovlevich Rabinovich; c. 1854–1932).

Familiarity with this literary fellowship made the choice of a writing career entirely natural after she emigrated to New York in 1923. After literary studies, Kaufman was repeatedly denied a teaching certificate because of a lingering Russian accent, and for what was considered an erroneous essay about a sonnet by the poet Edna St. Vincent Millay. Since Kaufman was accustomed to schmoozing with writers, she had the chutzpah to send the essay to Millay herself, who replied approvingly, much to the dismay of the Board of Education examiners. While Kaufman was finally allowed to teach, thenceforth only dead poets were included on future certification exams.

Decades later, Kaufman’s “Up the Down Staircase” – entitled after a comment by a school principal who caught her flagrantly disobeying hallway pedestrian traffic rules – likewise circumnavigated soulless edicts of anonymous educational authorities. The novel detailed how picayune paperwork and senseless meetings occupied the time of teachers, preventing them from establishing inspiring educational contacts with students. Kaufman’s protagonist Sylvia Barrett complains, “All our hours and minutes are accounted for, planned for, raced against.” Long after “Up the Down Staircase” sold millions of copies and was adapted for Hollywood in 1967, Kaufman – who made a cameo appearance in the film as an anonymous clock-punching teacher – was advocating for a “teachers bill of rights” which would guarantee a “right to respect, to a decent and safe classroom, to a salary commensurate with worth.”

Like her celebrated grandfather, Kaufman cloaked such serious messages in expressions of life-enhancing delight. A zesty woman perennially sporting oversized particolored sunglasses made by the Italian designer Emilio Pucci, Kaufman was an avid social dancer, venturing down to the dance halls of the “Little Odessa” neighborhood in Brooklyn as a nonagenarian to tango and mambo, and continuing to dance nearer to her Manhattan apartment on Park Avenue until well past her centenary. A lesser known novel from 1979, “Love, etc.,” in which a middle-aged divorcee finds a passionate new lover (“brilliant, handsome, cultivated, witty, rich… I’ve stepped smack into a fairy tale”), underlined the importance of eros to her literary imagination. With an exuberant Dr. Ruth Westheimer-like acknowledgment of the importance of sexuality as a lifelong preoccupation, even in the case of very long lives, Kaufman announced to the fashionista Ari Seth Cohen in a YouTube interview filmed at age 101 that she still “felt sexy.” Keeping up with the latest trends, she enthusiastically embraced Facebook for keeping in touch with friends and admirers, and would offer wryly bittersweet observations about the vagaries of fame and media attention. At 100, she was teaching a Hunter College course in Jewish humor during which she informed the public that “Jews are oppressed people who have survived by being able to thumb their nose at their own suffering.”

Remembering More Than a Century of Bel Kaufman’s Rebellious Charm