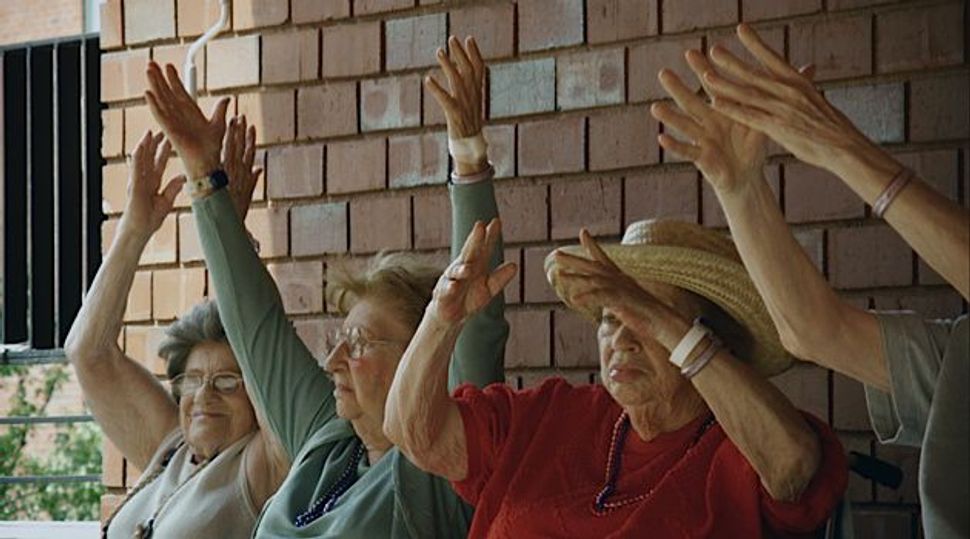 Escaping the Narrowness: New research suggests that mental stimulation and physical activity, such as yoga, can work as preventative measures against Alzheimer’s, the most common cause of dementia. Image by Kenny Suleimanagich

On a recent July afternoon, a group of residents at the Hebrew Home of Riverdale, New York congregated on a shady terrace. They were sitting in a semicircle facing Deborah Michaels, the instructor leading the yoga class. “Okay now we’re going to lift our hands up,” Michaels said. The participants raised their arms, some more than others. “And gently back down.” Michaels continued running through the basics of a yoga class, modified to be done while seated, for another half-hour. Yoga classes run twice per week, and are part of a larger strategy at the Hebrew Home to use alternative techniques in treating residents in their memory care unit.

Nearly one in three seniors suffer from some form of dementia, with Alzheimer’s being the most common. The neurodegenerative disease has been declared the sixth-leading cause of death in the United States. Perhaps most troubling to many is the fact that unlike cancer or AIDS, little is understood about the true pathology and direct causes of Alzheimer’s, including genetic risk factors. Detection and prevention are seldom options. Mitigating the effects of the disease with physical exercise has become a growing trend in the care and treatment of Alzheimer’s patients.

Several studies have examined a possible genetic link to Alzheimer’s, but few focus on Ashkenazi Jewish heritage specifically. The only firm links have been found in the early-onset form of the disease, which affects people under the age of 65 and accounts for only 5% of all Alzheimer’s cases. “You have this classic inheritance pattern from the disease, families where it appears to be endemic,” explains Dr. Lindsay Farrer of the Boston University Alzheimer’s Disease Center. Roughly 200 extended families worldwide carry this genetic mutation, among them an extended family of Ashkenazi Jews in the United States that was the subject of extensive study in the 1980s. As chronicled in the book “Hannah’s Heirs,” family members tracing medical records back to the early 19th century were able to narrow down the single ancestor from which their early-onset gene emerged.

One of the very few studies focusing explicitly on Jews, published in the Journal of the American Geriatrics Society in 2000 looked only at a very specific genetic mutation in a small population. Farrer explains that with genetic mutations of this sort, “the story is fairly checkered.” So far, while strong genetic risk factors for Alzheimer’s are prevalent among Ashkenazi Jews, no literature points to anything unique, according to Farrer.

Farrer was involved in one of the earliest Alzheimer’s studies to make a breakthrough. In 1995, his team discovered the presenilin-1 gene, which has been directly linked to the production of the protein beta amyloid, viewed as a major culprit in the onset of Alzheimer’s. Like a clogged pipe, plaque buildup caused by beta amyloid disrupts communication between brain cells. As plaque builds up, more brain functions are affected; memory loss, motor function decline and lack of ability to communicate are frequently associated with the disease precisely for this reason.

Back to Basics from Jewish Daily Forward on Vimeo.

Robin Dessel, the Hebrew Home’s Alzheimer’s educator, warns, “There are so many anomalies, so many covariants in the genetic mapping. I would not hang my hat solely on the issue of genetics.” Favoring a recent trend that points to physical activity as key in fighting the disease, Dessel’s approach at the Hebrew Home has been to usher in a comprehensive exercise-based therapy program.

Physical activity as a preventative measure for Alzheimer’s has in recent years been touted by the medical community, in addition to being embraced by the Hebrew Home. Some innovations Dessel and her team have introduced include sitting-yoga, breathing exercises, and chants. As recently as April, the medical journal Frontiers published a study that found a slowed decline in size of the hippocampus among physically active adults at genetic risk of the disease. A similar study published in the January 2011 issue of NeuroImage found that physical activity increased some brain activation related to memory in elders at risk of Alzheimer’s.

Alzheimer’s results from the blockage of neurological pathways. According to a 2012 report by the Cochrane Library in the United Kingdom, mental stimulation plays a crucial role in keeping pathways blocked by Alzheimer’s intact, while opening new ones. Achieving this requires innovation — whether that means introducing yoga classes, or rethinking Jewish holidays.

During High Holidays and Passover, special services are conducted specifically for residents of the Hebrew Home with Alzheimer’s or dementia and their families. Rabbi Simon Hirschhorn has led Seders there for patients and families for over a decade. “Our Seders are shorter and sweeter,” he says. “It’s not about what I do, it’s about how it’s done.”

Seders that Hirschhorn has conducted focus on staples like breaking the matzo, drinking wine, and making blessings which serve to bridge the divide between the residents and their families. He notes that several hurdles exist. “The residents often cannot sit through services [and] cannot hold decorum,” resulting in embarrassment from the family side, notes Hirschhorn.

“We use whatever modality there is to connect people to the content of the service, the prayers, the music,” he explains. Hirschhorn proudly recounts times that residents with more extreme cases of dementia have cognitively and emotionally “opened up” during these Seders in ways their families had not seen in many years. Alzheimer’s, he says, is a disease of “narrowness,” where both patients and helpless-feeling family members are stuck in their respective worlds and struggle to understand each other’s perspective. “What’s most important is to find your way out of that narrowness.”

Kenny Suleimanagich is a multimedia journalist based in New York City. His work has appeared in sites like Mashable and Medium. Follow him on Twitter @kennysule