How and Why We Mourn Robin Williams 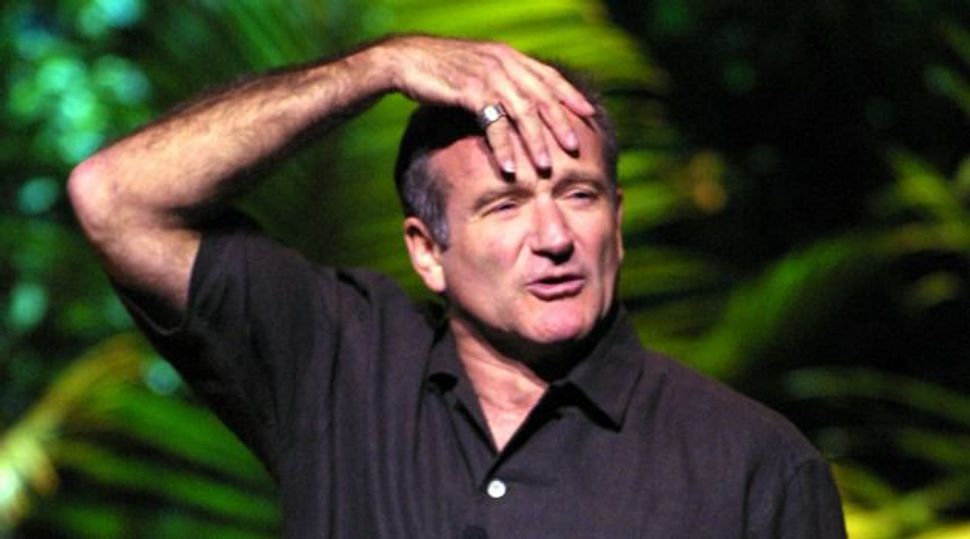 Reality…What a Concept: Robin Williams has died at the age of 63. Image by Getty Images

It has become a depressingly familiar and ritualized cycle of mourning. I heard the news on Facebook. If I’d been on Twitter, I would have heard it there — Robin Williams dead at 63 of an apparent suicide. Those who knew him shared memories of his talent and his generosity. Those who met him once or twice shared their brief encounters. Those who knew him from TV and film reminded us what those shows and movies meant.

In a day or two, those stories will give way to larger social commentaries — analyses of how Williams’s free-associative comedy captured the spirit of his generation; of how Williams’s death demonstrates the new way in which we mourn. Soon enough, even those stories will dissipate and give way to somber, wistful memories, the way we now recall the lives and deaths of Philip Seymour Hoffman, David Foster Wallace, Heath Ledger, Amy Winehouse, and Spalding Gray, the way we remember how we learned of those tragic stories — a Facebook post, a tweet, the sound of a news alert on our phone.

If this sounds cold or analytical, maybe that’s my own way of coping, an instinct to take sadness at this news and craft it into prose.

With most comedians and actors, I have no idea when and where I first encountered them. But with Williams, my memory is clear — a Sunday night ABC promo interview hyping a new show called “Mork and Mindy.” Why we were watching ABC that night, I have no idea — maybe there had been a football game. In general, we were a PBS family; we didn’t watch sitcoms. “Welcome Back Kotter” seemed stupid; I never really got the appeal of “Happy Days”; “All in the Family” made me feel vaguely unclean.

“Mork” was different, though. That one, we watched. The reason, of course, was its star — Williams riffing, sneaking in William F. Buckley and Richard Simmons impressions, making you believe the whole thing wasn’t scripted and could go off the rails at any moment, making you think it was worth watching. Because, truth be told, “Mork,” with its formulaic structure and its bland supporting characters (apologies to my childhood crush, Pam Dawber) wasn’t much other than a showcase for its twenty-something star. Nevertheless, Williams came to define both a style of comedy and of presentation — pleated parachute pants were “Robin Williams pants”; rainbow suspenders were “Robin Williams suspenders.”

My friends and I watched “Mork” and dozens of other shows and films just to see what Williams would do. He energized the seemingly moribund talk show format whenever he was on “The Tonight Show”; elevated a genuinely bizarre, cultish movie with his performance in the title role of Robert Altman’s “Popeye.” We would watch substandard flicks like “The Survivors” or “The Best of Times” solely for him. In the basements of West Rogers Park and Chicago’s northern suburbs when people actually sat around and listened to comedy records, his debut album “Reality… What a Concept” was a classic (less so, the follow up, “Throbbing Python of Love”) and we listened to it the same way we listened to rock albums, stood in line and waited to get tickets for his shows, the same way we waited in line for tickets to see Springsteen and The Who.

In high school, we spent the occasional weekend night at Second City in Old Town because, rumor had it, once in a while, Robin Williams would show up to try out new material. And one night he did — performing with all the vitality and spirit that we had come to expect. And if Williams’s comedy didn’t have the political dimension of Richard Pryor’s stand-up routines or the anarchic danger of Andy Kaufman, he betrayed both a warmth and a need that those artists of his generation seemed to lack. Maybe we should have wondered what that warmth was telling us; maybe we should have seen something beneath that tangible need.

My parents gave Robin Williams the ultimate compliment. He had to be Jewish, they said‚ both because of the way he inserted Yiddishisms into his performances and how he, as Mork from Ork, embodied the quintessential outsider. (This is another part of our mourning ritual — how we each try to find some part of the person in question and make him or her our own.) My folks were wrong about the religion thing, no matter how many times Williams referred to himself as an honorary Jew, as they may well have been wrong about dismissing Williams’s hero Jonathan Winters as an alleged anti-Semite. But that confusion says less about Williams’s background than it does about his talent, the way he was able to submerge himself into his roles in “Jakob the Liar” and “Seize the Day,” in “Good Will Hunting,” “Aladdin,” and “Mrs. Doubtfire.”

At some point, I lost sight of Robin Williams, viewed him mostly at a distance as he seemed to evolve into the role of comedic elder statesman — a kind, gentle, tender, sensitive, funny man, whose manic hilarity seemed almost safe, almost under control. With hindsight, perhaps that was his greatest acting job of all. But really, who knows. For, I knew only the characters he played, the jokes he told, the sensibility he embodied and what all of that meant to me at the time. The rest of him is someone I never knew. Just as there’s a part of me who doesn’t want to tweet this essay or Facebook it, who doesn’t want to see who shares this or “likes” it. And that’s the part of me who will remember Robin Williams long after I have forgotten writing these words.

Adam Langer is the Forward’s arts and culture editor.

How and Why We Mourn Robin Williams