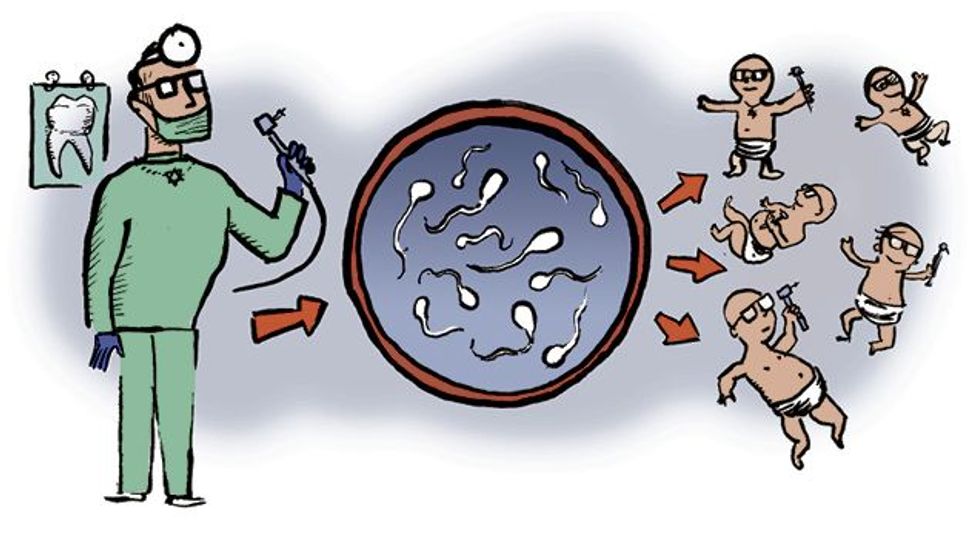 Be fruitful and multiply. The Biblical command sounds so straightforward, yet it can be anything but.

In order to conceive a child, some aspiring parents — be they lesbian couples, single mothers, or straight men with poor sperm quality — need a little outside help… at least a few milliliters of help, to be precise, in the form of donated sperm.

But the process, which can be legally complex as well as socially and physically awkward, isn’t always smooth sailing. Donating — or receiving — Jewish sperm presents its own set of difficulties that can leave those involved feeling like they’re swimming upstream.

Here are six things you need to know about Jews and their sperm.

A 2012 study of Israeli sperm donors found a noticeable decline in sperm quality over a 15-year period. Sperm counts fell by over a third, from 106 million sperm per milliliter of semen to 68 million.

Many scientists believe that sperm quality is dropping throughout the developed world, though it may be declining faster in Israel, according to Dr. Ronit Haimov-Kochman, the study’s lead researcher.

If current trends continue, Israeli sperm donors could drop to 20 million sperm per milliliter, the lower limit of levels considered normal, by 2030, according to the study.

Haimov-Kochman, who oversees the Hadassah Medical Center’s sperm bank in Jerusalem, called the decline “significant and fast,” but cautioned that the study was small and limited to vetted sperm donors, who are selected for their particularly high quality and abundant sperm.

But that only makes the study’s conclusions more worrisome. If the best sperm donors — whom Haimov-Kochman calls the “A-team of sperm” — are seeing sharp declines, the average Israeli male, who is less fertile to begin with, may be experiencing drops in sperm quality he can’t afford.

2) Got Milk? Could Be a Problem

Scientists still aren’t certain what is causing the purported worldwide drop in sperm quality, let alone the peculiarly steep decline in Israel. A variety of theories have been floated, from exposure to cell phone radiation to tight-fitting clothing to climate change.

Like many researchers, Haimov-Kochman suspects that endocrine disruptors, chemicals that interfere with the body’s hormones, are primarily to blame. She reserves special concern for compounds that mimic the estrogen hormone, which plays an important role in human reproductive health. These chemicals may interfere with sperm quality in adults, and could cause lifelong damage to the testicles of males exposed in the womb. 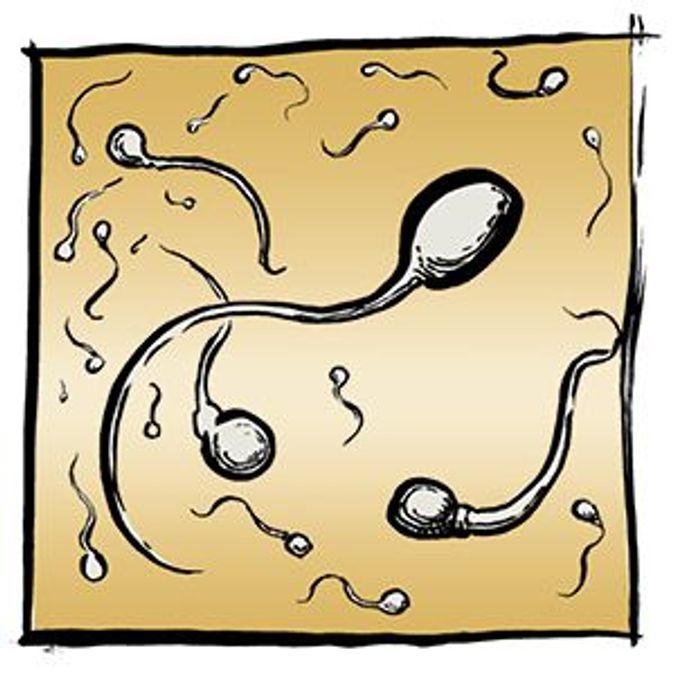 “It seems that we swim in a sea full of estrogen and estrogen-like products,” she said. “And men are the first to be harmed.”

One of these products is bisphenol-A, a compound used in a variety of plastic products, from dental fillings to DVDs to the lining of food cans.

Traces of estrogens are also found in drinking water, thanks to manure runoff from factory farms and even birth control medication, which can enter the water supply through women’s urine. In arid Israel, crops are irrigated with partially treated wastewater, which may contain higher levels of estrogens than better-filtered drinking water. The plants, in turn, may absorb residual hormones from the water, and pass along their toxic gifts to consumers at dinner, according to Haimov-Kochman.

“We’re not 100% sure that this water is devoid of hormones,” Haimov-Kochman said. “We just don’t know.”

Milk is another possible source of unwanted hormones. Historically, cows were only milked after giving birth, when they would produce milk anyway. But industrial farming methods allow cows to be milked while they are pregnant, when levels of estrogen in the milk can spike.

Haimov-Kochman collected milk samples from across the world and discovered elevated hormone levels in those from Israel and other developed countries, which use the aggressive milking practice.

Thanks mostly to diminished sperm quality, some Israeli sperm banks are facing a shortage of sperm donors.

“We had to lower the criteria in order to have enough sperm donors,” Haimov-Kochman said, referring to the Hadassah Medical Center’s sperm bank. “It seems that now about two-thirds of the applicants for sperm donation go home without donating because they have poor quality. We reject a lot.”

The Hadassah clinic tries to entice a larger pool of donors with cash: For each sperm sample, a donor earns 1000 shekels, or about $300. “It’s a nice monthly salary if you’re a Hadassah sperm donor,” Haimov-Kochamn said.

The staff of Haifa’s Rambam Medical Center sperm bank, where only 10% of applicants have sperm of acceptable quality, took a different approach to luring new donors. About three years ago, they teamed up with a local graphic design school to produce catchy advertisements aimed at male college students. 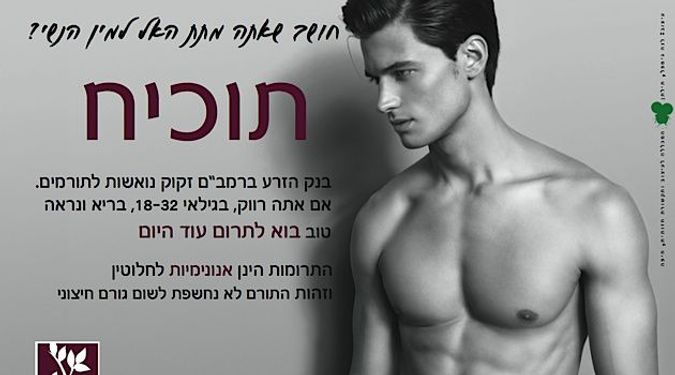 The results were humorous and, in some cases, shocking. “Think you’re God’s gift to women? Prove it,” one ad reads. Another depicts a box of tissues, along with the phrase “It’s in your hands.” In a third, the words “Giving sperm: it’s a lot more pleasant than giving blood,” appear next to a winking baby.

Despite the catchy ad blitz, Rambam still struggles to keep sperm in the bank.

“We have 10 donors, and this is not enough,” said Dr. Shahar Kol, director of Rambam’s sperm bank. “We always need more.”

But not everyone agrees that sperm stocks are going down the tubes. Dr. Jacob Ronen, CEO of CryoBank Israel, Israel’s self-proclaimed “largest and most respected” sperm bank, said his company has no trouble finding donors. CryoBank Israel has almost 100 donors, despite accepting only 1 in 80 applicants as suitable for its stocks. It has a team of four employees dedicated to recruiting potential donors. “In order to get donors, you have to work,” Ronen said.

4) Jewish Sperm Is in Demand

Jewish sperm is overrepresented in the vaults of California Cryobank, the largest U.S. sperm bank, which has locations in Los Angeles, New York, Boston and Palo Alto. Though Jews represent less than 2% of the adult population of America, they represent over 12% of the bank’s donors, according to Scott Brown, director of communications.

At the New York branch of Cryos International, another prominent sperm distributor, Jews account for 8% of donors. Even so, these American sperm banks face the same problem Israeli sperm banks have: They want more Jews. “There always seem to be a shortage of Jewish donors,” Brown said.

This dearth of men willing to donate is not confined to the Jewish community. “We always need more of basically any minority,” Brown said. Many parents request a specific ethnicity or religious background for their donor but don’t want to be limited to just a few donors because of it.

California Cryobank says it exports more sperm to Israel than to any other country in the world.

Much of it goes to Cryobank Israel, which imports 25% of the sperm it offers customers. Ronen, the company’s CEO, said most of the demand for imported sperm comes from clients seeking a so-called “open” sperm donor, who is willing to reveal his identity to his recipients. Under Israeli law, sperm banks are required to keep their donors anonymous, but that restriction doesn’t apply to U.S. donors.

However, some of the demand for imported, non-Jewish sperm comes — surprisingly — from the Orthodox community, according to Ronen.

Many rabbis have ruled that sperm donation should be done with non-Jewish sperm in order to avoid the possibility of incest if the child unknowingly marries a sibling years later.

“If you have a non-Jewish male and a Jewish female, the child, for purposes of Jewish law, has no father,” said Rabbi J. David Bleich, a scholar of Jewish medical ethics at Yeshiva University. Without a legally recognized father, the threat of incest under Jewish law is removed, according to Bleich.

But even non-Jewish donors are not universally accepted. Many rabbinic authorities see any kind of artificial insemination from a donor as a form of adultery.

“It’s a violation of the marital relationship. You’re introducing a third party who is not the woman’s husband,” Bleich said. “If it’s not technically adultery, it’s quasi- adultery.”

Before a man is accepted as a sperm donor, sperm clinics run a battery of tests not only on his sperm, but also on his DNA, looking for genetic anomalies. Ashkenazi Jews are checked for a variety of genetic diseases common to the Ashkenazi community, like Tay-Sachs.

Ronen is proud that Cryobank Israel checks for 44 diseases — not only in the DNA of the donor, but of the mother as well.

And at Cryos International, everyone — Jewish or not — is tested for Ashkenazi diseases. The company decided to start testing all its donors about a year ago just to be safe. “What if we send out the genetic testing and then somebody realized later on that this one did indicate Jewish?” Centola said. “We [would] have to retest.”

Another problem is that donors sometimes aren’t aware of their Jewish ancestry, or don’t identify as Jews. “Based on how you ask the question, they might say, ‘No, I’m not Jewish, I’m Protestant’ — and then it turns out they have Jewish ancestry,” she said. “We might as well just test them all from the beginning.”

Sperm banks choose donors with high sperm quality and safe genes; other desirable traits include good health, a college education and height (at California Cryobank, Caucasian donors must be at least 5 feet 9 inches).

But beyond these parameters, the banks leave the decision up to the parents, and it’s hard to say which donor will catch their eye. “There’s no one characteristic that’s going to guarantee that a guy is going to be popular,” Brown of California Cryobank said.

Brown remembers a specific donor — an attractive, Jewish dental student — whose sperm flew off the shelves. Most of the buyers were Jews looking for a Jewish donor. “I kept getting call and after call. It was just remarkable,” he said. “Everybody just loved this guy.”

But not every donor hits the jackpot. So if you’re a Jewish man seeking to alleviate the sperm shortages in America or Israel, don’t get too cocky. On the offhand chance that you’re not a carrier for a genetic disease (1 in 4 Ashkenazi Jews is a carrier), your sperm quality is probably too low.

But even if it isn’t, there’s no guarantee prospective parents will flock to your sperm and make it a hot commodity.

Hody Nemes is a Forward summer fellow and a 2013 graduate of Yale University. Contact him on Twitter, @hodifly