Picturing the Lives of Scottish Jews 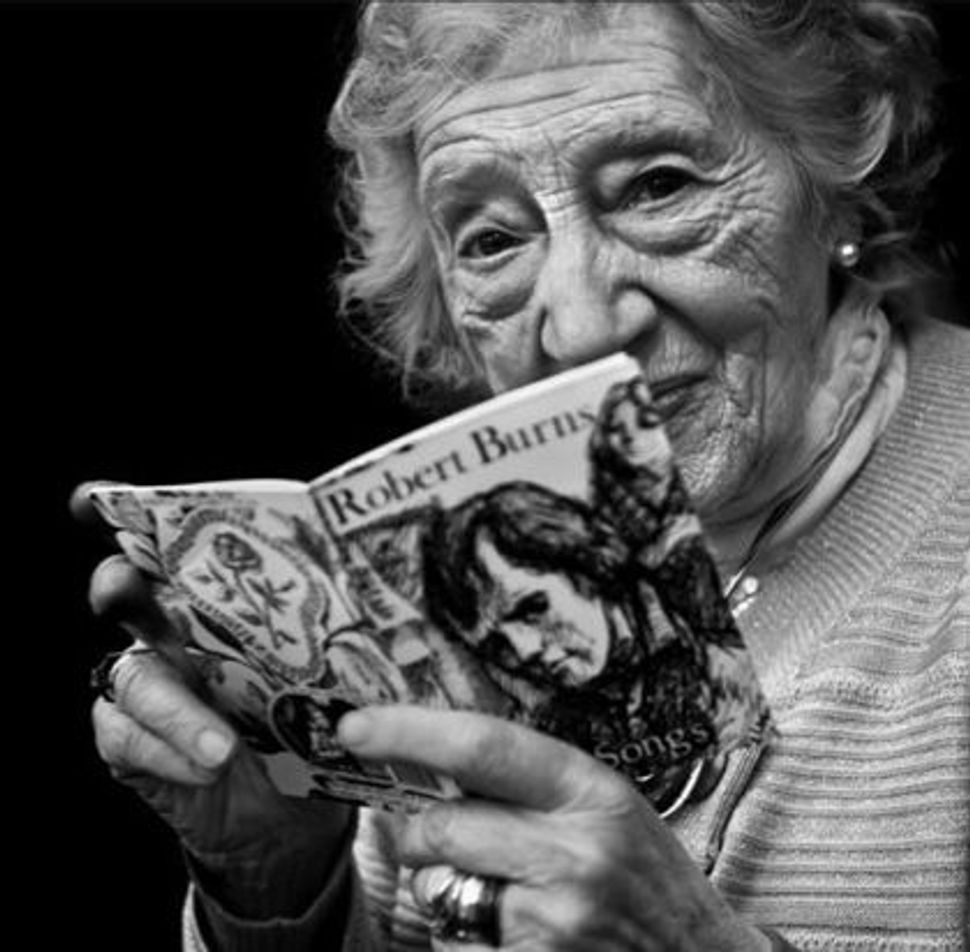 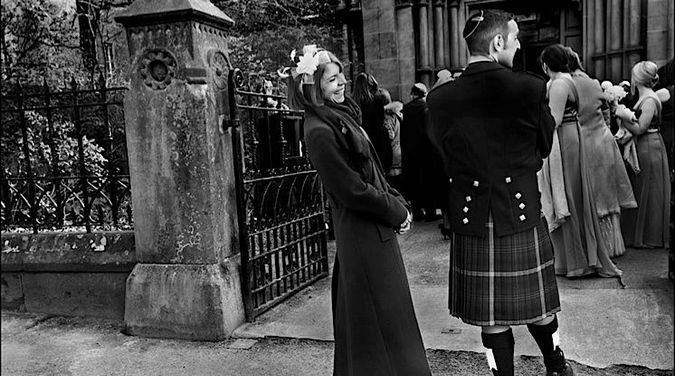 Top and Tails: A wedding isn’t complete without a kilt and a kippah. Image by Judah Passow (Detail), Courtesy of 92Y and JCCSF

Photographs reek of death. At best they fossilize objects as they were, at worst they condemn them to an eternity out of context. If he’d lived to see them, Keats would be proud of these foster-children of “Silence and slow Time.”

It’s difficult to imagine a genre less suitable for portraying Scottish Jews: a group at the intersection of two peoples both accused of hairy schmoozing, hand-waving garrulousness and, to put it kindly, financial prudence.

Sometimes an excuse for a professional shoot is ethnography, sometimes it’s art. Either excuse has its own logic. For the recent exhibition of black and white photographs entitled “Scots Jews: Identity, Belonging and the Future” at New York’s 92nd Street Y, the logic remains unclear and the photographs generally remain either enigmatic or clichéd.

Scots and Jews have much in common — Kiddush whisky, smoked salmon and, depending on how you procure shofars and bagpipes, a propensity for making loud “musical” sounds from sheep parts. But the ignored (often despised) others at the heart of the British Empire and European civilization find little common ground with each other. Despite my colleague’s investigation of Scottish Yiddish, there has been little Jewish influence on Scotland. Nor, beyond the obvious acculturation of the remaining 7,000 Scots Jews, has Scotland had much influence on the Jews.

Currently in transit between New York and the Jewish Community Center of San Francisco, “The Jews of Scotland” (as it will be titled in its new location from October 11) tells Americans little about Scots, Jews or Scottish Jews. but the images are aesthetically pleasing. Judah Passow, the award-winning artist, has taken beautiful snapshots of stereotypical images of Scottish life (Burns Nights, haggises, kilts) along with stereotypical images of Jewish life (a shofar, boys in tzitzit, even a photo of a picture of Anne Frank). 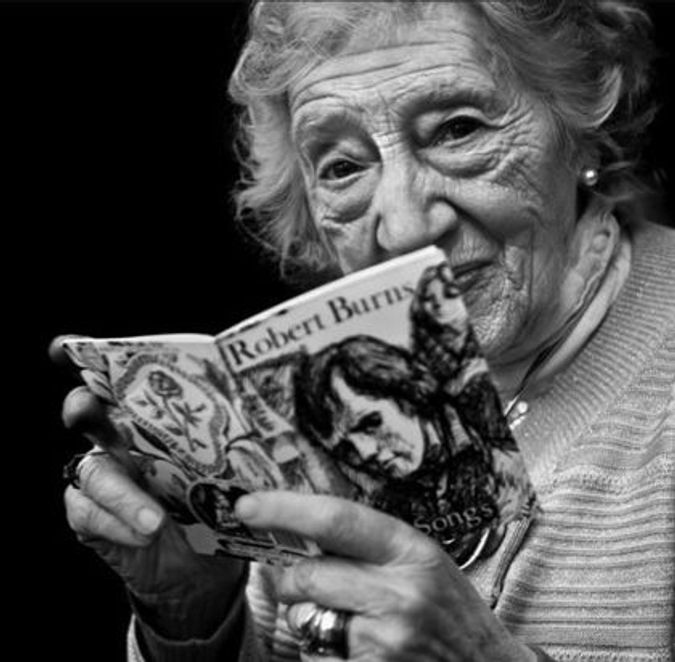 But there are few images that spark and flare where the two identities meet.

One or two photographs illustrate neither constituency obviously (a helicopter pilot, a landscape photographer), but it’s the ones that illustrate both are the liveliest. There’s a fantastically cheeky photograph of a Purim megillah reading and a candid snap of the Glasgow chapter of the Jewish Lads and Girls Brigade that capture a vital arc of experience. The pick of the bunch, though, is a young boy wearing a yarmulke shot as he dives to his left to save the soccer ball arrowing to the corner of the goal painted onto the red brick wall.

But Passow is “a winner of four World Press Photo awards for his coverage of conflict in the Middle East,” as the press release tells us, and his photographs have appeared in “all of the leading British newspapers.” And so, perhaps unsurprisingly, though the illustrations are apt, the story is missing. Words are spirit, life breathed into the pictures. Even the titles can begin, briefly, to animate the images. But, alas, American visitors are left googling locations and marveling that Scotland is actually part of the same landmass as England.

Scotland’s Jews — scores of whom I happily number among my family and friends — have a fraught relationship with their surroundings. They are a tiny minority within a country deeply identified in its opposition to the English oppressor south of the border. They feel their Scottish identity, despising, for example, the lazy parochialism of Londoners who assume that England’s capital stands for Britain. Scots love to tweak the nose of Westminster. But, as with much of the middle class, Scottish Jews recognize that independence would be an economic risk and that nationalism is nationalism and it doesn’t take long to turn from one version of “Scotland for the Scottish” to another.

But the liveliness of the debate about Scottish independence, and about Jewish Scottishness bely the elegiac tone of this exhibition.

The French call the painterly genre of “still life” (that crystallized with the aid of technology in the late 19th century into photography) nature morte — dead nature. In a culture where photographs are proliferating as never before, that’s a problem. The point of each individual picture is more obscure, every flickr account hosts a thousand prison windows whose inhabitants are forever hidden from scrutiny, no longer susceptible to the enlightenment of thought, or that vital instrument of thought: language.

I love beautiful photography. Its composition in light is nonpareil for an evocation of certain landscapes or autumnal moments. The soft oppression of the easy image is a danger: when our memories are prosthetic, our opinions become externalized. We lose ourselves. We increasingly resemble our Facebook feeds or, what is even more troubling, we aspire to resemble them.

Passow’s photographic series raises important epistemological questions about the art of photography and its relations to the real world. A moment establishes itself in relation to its history and its future. It is a meniscus formed as the future coalesces in the present. While Scotland is caught in a momentous decision about its independence, these photographs appear without context, released from the struggles that brought them about.

The ubiquity of the image (including the primacy of video) is eroding our ability to explain ourselves, not just to present ourselves. Word processing, tweeting and microblogging of all sorts is eroding the art of communication along with rhetoric and the ability to argue a point.

Fortunately, though many anti-Semitic stereotypes are invidious, the Scottish Jews of my acquaintance are indeed full of language and determination. They aren’t about to get lost in silence, they will blow the bagpipes of Rosh Hashanah and march forward, independently, into the future to choose life. And, if they have a few wee photos of themselves to enjoy, so much the better.

“The Jews of Scotland” will be on display at The Katz Snyder Gallery, at The Jewish Community Center of San Francisco from October 11 – December 31

Picturing the Lives of Scottish Jews