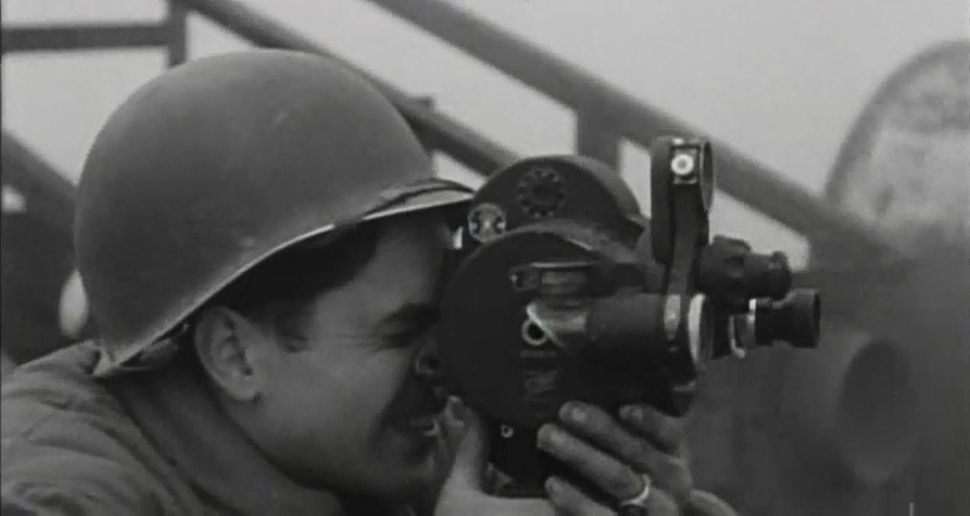 A new film about a forgotten, long-shelved documentary chronicling the Allies’ discovery and liberation of the Nazi concentration camps is offering viewers a restored contemporaneous account of that seminal moment in history.

The original, unfinished documentary has now, 70 years later, been reproduced and completed by the British Imperial War Museums. Titled “German Concentration Camps Factual Survey,” the film was finished based on the shot sheets, script and rushes of the original filmmakers, who were forced by geo-political considerations to stop their work. “Night Will Fall,” the new film about the film, combines raw archive footage from the 1945 documentary — which counted Alfred Hitchcock among its treatment advisers — and contemporary interviews with the now elderly veteran soldiers, former film cameramen, film editors, and Holocaust historians and survivors.

The original work began in the waning days of World War II. British producer Sidney Bernstein, chief of the film section at the Supreme Headquarters Allied Expeditionary Force, had instructed his cameramen to film everything in order to provide undeniable proof of Nazi atrocities.

What is apparent is how unprepared the soldiers were for the horrors that awaited them. For some, the experience has been a lifelong trauma. Many found it difficult to later articulate to the makers of “Night Will Fall” what they saw and what they remembered.

The story behind the initial, incomplete making of the original documentary includes its suppression by the British and American governments as they shifted away from exposing Nazi atrocities and toward restoring and reconstructing West Germany as a bulwark against the perceived new threat from the Soviet Union.

Director André Singer has referred to the making of “Night Will Fall” as an all-consuming journey, an exploration of the role of the moving image, both then and now.

Singer has termed it “an enormous privilege” to interview “the soldiers who first entered the camps, the cameramen who lifted their cameras and filmed, the editors who viewed the footage, and the victims who suffered there and who were recorded on film in the first, unbelievable moments when rescue finally came.”

“Night Will Fall” opened in British cinemas in September after premiering in the United States at the Telluride Film Festival in August. The film’s American producer, Marie Therese Guirgis, has said that it will be released here in 2015, but no date has been confirmed.

It was as the war was drawing to an end that Britain and the United States set up a joint film department. Its mandate was to produce short propaganda films to support the war effort, and later to assist in the task of dealing with a defeated Germany. Headed by Bernstein, the new unit recorded the atrocities that the soldiers — many of whom were newly trained as cameramen — encountered at the point of liberation.

In 1945, as the numerous reels arrived in London, and editors faced the momentous task of processing the material, Bernstein began to plan a full-length documentary. Speaking in 1984, he explained that his instructions had been to film everything, providing undeniable proof of what had happened. He wanted the film to serve as “a lesson to all mankind.”

For the material to be used as evidence in war crimes trials, the project required filming in a very specific way. According to historian Toby Haggith, one of the difficulties of filming the atrocities as evidence was the need to get close to victims. This contrasted with the tradition of previous combat cameramen, Haggith explained, who had shied away from representing or recording scenes of people who had been brutalized or killed.

As he saw the scope of the task grow, Bernstein decided to approach his friend Alfred Hitchcock for ideas. Credited as treatment adviser, the legendary director’s brief input was to be his only foray into documentary filmmaking.

But as concern over the perceived postwar threat from the Soviet Union grew, British and American priorities shifted. Reconstructing Western Germany as an anti-Communist bulwark took precedence over dwelling on the sins of Nazism. The film’s sponsors came to see it as an inconvenience, and the British and American governments cut their support for the project.

By September 1945, the edit had been shut down and the material filed away. Although the film remained unfinished, some footage was used during the Nuremberg war crimes trials. Except for this, the footage lay in the archives of the Imperial War Museums, gathering dust.

Two years ago film producer Sally Angel approached Spring Films, Singer’s London based production company, with the idea of developing a co-production about the historic film footage. Haggith had told her about Bernstein’s film and she wanted to tell the story behind it. Singer took the task on eagerly.

“Night Will Fall, ” which received a special mention at the 2014 Jerusalem Film Festival in July, is inevitably harrowing, and at times challenging to watch. By revealing a hitherto unknown aspect of the Holocaust, it serves as a powerful and significant addition to Holocaust testimony and education. It took 70 years, but as Bernstein’s last recorded note to his editor, Peter Tanner, predicted, “One day you will realize that it has been worthwhile.”