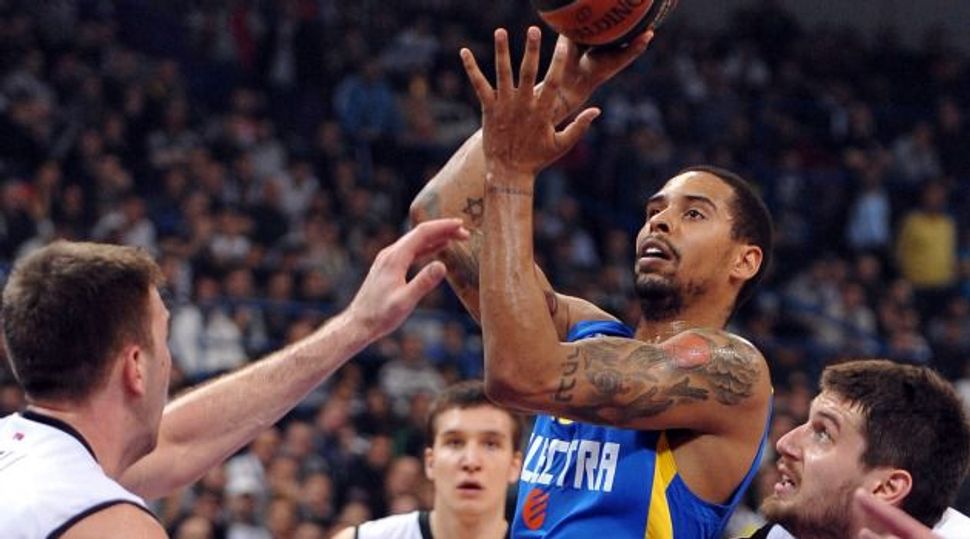 It is an exciting time to be part of the Maccabi Tel Aviv basketball team. In May, the team shocked the basketball world by winning the 2014 Euroleague Championship. Then in June, coach David Blatt was hired to be the new coach of the Cleveland Cavaliers, where superstar LeBron James will play this upcoming season. The team just finished a 17-day world tour with an exhibition game against the Brooklyn Nets at the Barclays Center on Tuesday (they lost 111-94).

Sylven Landesberg, who grew up in Flushing, Queens with a Jewish father and Trinidadian mother, is an important member of the Maccabi team. After attending Holy Cross High School in Queens, Landesberg was named New York State Mr. Basketball and attended the University of Virginia, where he was nominated to be the ACC player of the year. He talked with The Forward about playing in Israel and what his future holds.

What is it like being an American player in Israel?

Over the years, I’ve gotten offers from other European teams, and I’ve told my agent not to follow up on them. I feel that Maccabi is the best fit for me, and over the past couple of years I really feel like I’ve become a part of Israel. The more I get to know Israeli culture the more I understand that Maccabi is the franchise I want grow with. Is it always easy playing here? No. But not everything is easy in life, I’m not going to just give up and walk away; I’m a fighter. That’s what I’ve done here at Maccabi, and what I’ll continue to do.

When I immigrated to Israel, I knew that I would one day enlist. I wanted to be a part of the country like everyone else. Basic training was much harder than I thought it would be. I learned to appreciate things a lot more.

Do you still plan on trying out for the NBA, or have you settled into the culture of the Maccabi Tel Aviv team?

I grew up being a huge fan of the Knicks and loved watching their games. The ultimate goal is to play in the NBA. I hope to one day fulfill that dream, but right now, I’m feeling great in Tel Aviv and really looking forward to enjoying another successful season with Maccabi.

Which players do you try to model your game after?

In Israel I’ve been compared to former player David Blu. He’s become a real symbol of successful “Maccabi immigrants.” It would be an honor to do what he has done for this franchise.

I know everyone will laugh, but the first food I fell in love with here was Falafel.

The country Is beautiful. Before I first moved here, I thought it was just a big desert. Then I realized there’s so many amazing places. The beaches, mountains, it’s all really nice. Also the people I get to work with, whether it’s the management or my teammates, or really just all the people affiliated with the team, because they’ve made the transition of making Aliyah a lot easier for me.