The Secret Jewish History of ‘My Fair Lady’ 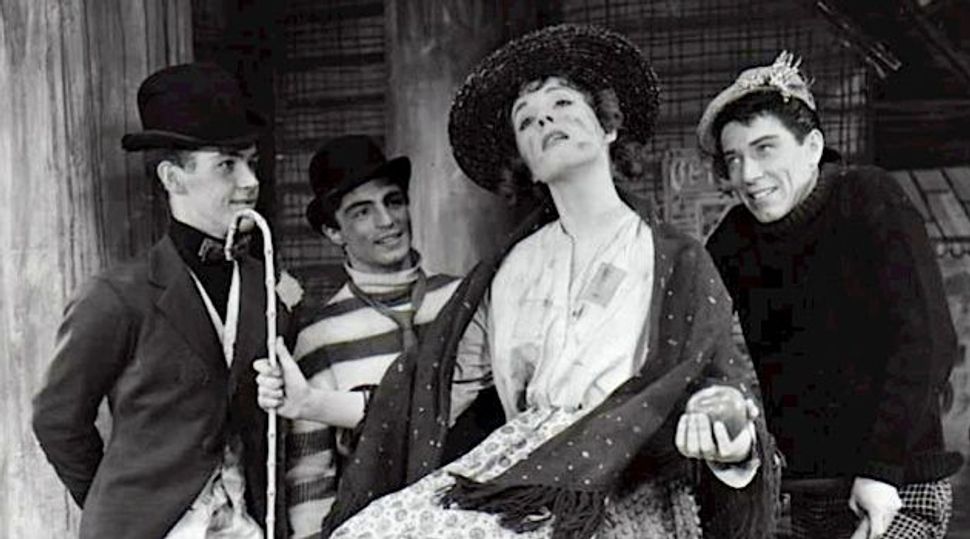 Fair Manners:: Alan Jay Lerner collaborated on some of the 20th century’s most famous musicals, including ‘My Fair Lady.’ This scene shows Eliza (played by Julie Andrews) and her friends dreaming of a better life in the 1956/7 Broadway production. Image by Wikimedia Commons

Sometimes the Yiddishkeit of a creative talent comes through only in private writings. Playwright and lyricist Alan Jay Lerner won immortality with the stage musicals “My Fair Lady,” “Camelot,” and “Gigi,” which are filled with British and French flavor, respectively. Yet a welcome new collection of Lerner’s letters, “Alan Jay Lerner: A Lyricist’s Letters,” demonstrates how Lerner made abundant references to his Jewishness when communicating with friends, and sometimes foes, in the performing arts world.

One of Lerner’s closest alliances was with Moss Hart who directed “My Fair Lady” and “Camelot.” Although Lerner was heterosexual (eight times married) and from a privileged background (Choate and Harvard, the nephew of the founder of Lerner Stores), and Hart, according to his biographer Steven Bach, was a closeted gay man from an impoverished background, they were brought together by an appreciation for Jewish humor. In 1956 Lerner wrote to Hart to acknowledge a gift in somewhat cryptic terms: “Because I’m ‘rich and Jewish,’ I’ve received a lot of nice presents in my time, but in all my graying thirty-seven years none has ever meant as much to me as yours.”

Aware even in jest of his own wealth and Jewishness, Lerner termed his most celebrated writing partner, Frederick Loewe, a “schizophrenic” in “The Musical Worlds of Lerner and Loewe” by Gene Lees, because Loewe had an Austrian Jewish father and a gentile mother: “That’s why he was difficult. Very moody.” Of course, Hart and Lerner suffered from major anxieties and mood swings without any such background of mixed marriage in their own families. In a 1956 letter, Lerner cheerfully addressed Loewe as “Dear Meistercocker,” an amalgam of Meistersinger and alter cocker, and referred to a benefit performance of “My Fair Lady” that had an audience so grand that “it made the opening night look like a Hadassah benefit.”

In 1973, Lerner wrote to his friend and collaborator Leonard Bernstein at the time of Bernstein’s celebrated Harvard lectures, “The Unanswered Question.” With no apparent interest in Bernstein’s intellectual aspirations, Lerner jested instead about their shared indulgences in booze and pot: “As for your liquor bills, they are still at M.I.T. being computed. And who is this girl Mary Juana? Why is she so expensive? Can’t you find a nice, sensible Jewish girl?”

When the Bernstein/Lerner stage musical “1600 Pennsylvania Avenue” proved to be a disaster, Lerner wrote again to Bernstein shortly after opening night: “This day is a killer. And tonight a pogrom.” Not all of Lerner’s Jewish wisecracks offered consolation or expressed bonhomie; about the American Jewish film director Stanley Donen, he wrote “Mr. Donen (rhymes with Onan)… I don’t know if it’s allowed, but last Thursday on Yom Kippur when praying for the dead, I mentioned his name.”

The more Lerner admired someone, the more he seemed to wish to discern his or her Jewish identity, as in a 1979 missive to the prolific British producer of musicals Cameron Mackintosh. He informed Mackintosh that he was “deeply impressed with [his] hustle. I know that you are Scottish, but you must have some Jewish blood somewhere.”

Writing to the quintessentially goyish Robert Goulet — who had starred in “Camelot” on Broadway many years earlier and was seeking authorization to perform an abridged version in Las Vegas — Lerner acquiesced, recalling that another actor had similarly “played ‘My Fair Lady’ in a circumcised version.”

In 1970, writing to his hero, the octogenarian songwriter Irving Berlin, Lerner seemed to abandon his usual leftist political beliefs — close to those of Bernstein — to make an ethnic jest designed to please the arch-conservative Berlin. Discussing his most recent Broadway musical effort, the troubled “Coco” with music by André Previn, Lerner notes: “As you know, the critics were less than cordial, and André and I came off like two white cops in a Watts riot.”

In later years, Lerner’s own views about politics and art may have genuinely become less tolerant as his dependence grew on injections from the notorious Max Jacobson the German Jewish physician known as “Dr. Feelgood,” who sold amphetamines to celebrities including John F. Kennedy, Eddie Fisher and Zero Mostel. Clouded judgment from drugs, as recounted in a tawdry memoir by Lerner’s long-time secretary Doris Shapiro, probably contributed to Lerner’s late career artistic and financial woes, as he leapt from composer to composer after Loewe’s retirement, changing writing partners after each stage failure. In a tetchy preface to a 1973 publication, “The New York Times Great Songs of Broadway,” Lerner opines:

In or out of theatre, rock is primitive stuff, extremely limited dramatically, popularized by the young for the young. Although youth has many glories, it has never been a period distinguished for judgment and that is no less true today… Increasing the volume will never turn a belch into an aria.

Lerner’s gaseous metaphor serves to remind us that somehow he was less suited to the role of “Meistercocker” than was Loewe, to whom he had so exuberantly attributed the moniker decades before.

Editor Dominic McHugh, a lecturer in musicology at the University of Sheffield, shows debatable taste in ranking “I Talk to the Trees” and “They Call the Wind Maria” from the creaky “Paint Your Wagon” among Lerner and Loewe’s “finest” songs. Yet “Alan Jay Lerner: A Lyricist’s Letters” does win our gratitude for making available personal documents that help to explore the ethnic identity of one of the most justly acclaimed American Jewish writers for the musical theatre.

The Secret Jewish History of ‘My Fair Lady’