Can Internship Program Build High-Tech Bridge Between Israel and Palestinians? 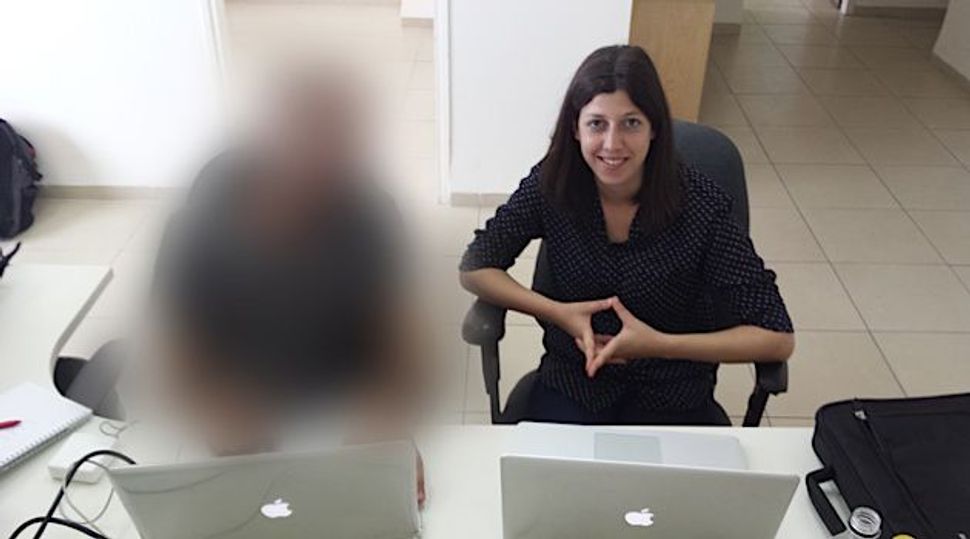 Tomorrow’s Tech Leaders? The Palestinian intern (left, with blurred face) and Hadar Farberman, the head of user experience and design at the Haifa-based start-up MediSafe. The intern could not reveal his identity, fearing repercussion from his community. Image by courtesy of medisafe

Sari Taha is a 26-year-old Palestinian from East Jerusalem whose goal is to be a leader in the West Bank’s tech industry. His training ground? Israel.

Over the summer, Taha began an internship at Takwin Labs, an Israeli incubator for Arab tech companies. He worked as an analyst, fielding pitches from entrepreneurs and researching market opportunities. Inside the office — the program was hosted at a West Jerusalem venture capital firm — it was strictly business. But outside of the office, his internship was controversial among some friends and acquaintances, especially after Israel went to war with Gaza. 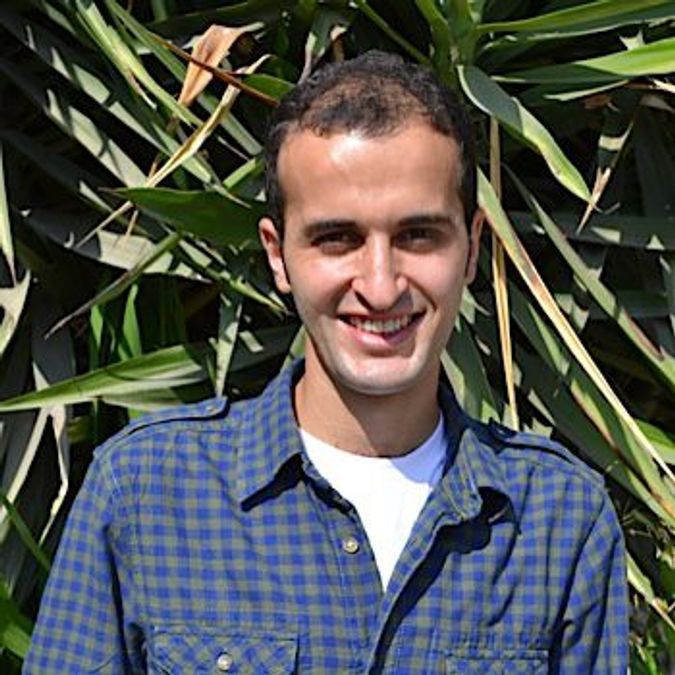 “People ask me, ‘How can you do that?’ This is always my answer: I am just doing my work and my work is creating something and adding value and learning from people,” he said. “For me to advance, for me to be able to contribute to the future of Palestine, I need the skills to learn and I found this opportunity here.”

Taha wasn’t the only Palestinian to learn the tech trade across the Green Line during the tensest summer between Israel and the Palestinians in recent memory. His internship was part of the Palestinian Internship Program, a pilot program to expose young Palestinians to Israel’s high-tech landscape. The goal is to produce Palestinian leaders who will return to the West Bank to foster the burgeoning tech scene there. Yet while the internship program might look like a peace-building effort, its organizers insist it has no political aims. Instead, they hope that Israeli know-how will be used to strengthen the Palestinian economy, which they say will benefit Israel, too.

“This is really about helping the Palestinian high-tech sector grow to be bigger and stronger by investing in its youth,” said Zachary Fenster, PIP’s program manager. “The most logical place for Palestinians to be exposed to a much more developed high-tech sector is Israel, since it is so close.”

PIP is the brainchild of Yadin Kaufmann, a veteran venture capitalist in the Israeli tech scene who emigrated from the United States to Israel in 1985. Kaufmann is the co-founder, along with Palestinian Saed Nashef, of Sadara Ventures, the first investment fund targeting Palestinian technology companies. Kaufmann’s contact with young Palestinians convinced him that the West Bank was full of talented, tech-smart people who lacked opportunities to work in the field. By exposing them to firms in Israel, he said, “they could see what a real tech company looks like and gain skills and contacts that could help them come back and develop their companies in the tech sector in the West Bank.”

For its pilot project, the company paired eight interns, four women and four men, from the West Bank and East Jerusalem with Israeli, American and multinational tech firms in Israel. The interns were compensated by the United States Agency for International Development, which invested an initial $37,000 in the program. USAID also applied for permits from the Civil Administration, the Israeli governing body that administers the West Bank, in order to enable the participants to travel from the Israeli-occupied territory into Israel proper.

The Palestinian Internship Program was not impervious to the spillover from this summer’s Gaza war, even though all Palestinians completed their 10-week internships. Mashhour Abudaka, a former Palestinian Authority telecommunications minister and the founder of the Palestinian Information Technology Association said the program could not be publicly promoted in the West Bank because of the general mood against cooperation with Israelis in the wake of Operation Protective Edge. Though he helped PIP locate its first round of interns — as an individual, not as the head of PITA, he stressed — Abudaka declined to assist in the search for new interns for the fall program because it was considered too controversial. “This program has become a victim of the political situation,” he said.

The summer’s events also impacted the internship program at MediSafe, a Haifa startup that created an app to remind people to take their medications. Omri Shor, the company’s CEO, said that he signed on to the program out of the belief that “in order to have some peace and quiet here we need to have success on the Palestinian side as well.” After interviewing several candidates, Shor brought on a 29-year-old man from Hebron with a degree in computer science from the Palestine Polytechnic University. But when the three Jewish boys were abducted near Hebron in June — which was followed by massive Israeli military raids throughout the West Bank — the intern’s permit to cross into Israel was revoked halfway through the program. He continued working over Skype instead. When the intern was allowed to return, the company helped him rent an apartment in Haifa and eventually hired him full time to create a web portal for medication management.

Shor said that in order to successfully integrate the intern, MediSafe had to avoid politics in the office altogether. “I come from the army,” he said. “I spent a bunch of time in Hebron, nine months of my life, in the Second Intifada,” he said. “That was not an easy time. For us to work together everything had to be left on the hangers with the coats outside of the office.” There were sensitivities for the intern as well. Shor said that the intern requested that his name be left out of this article lest he face a backlash from other Palestinians about working for an Israeli company. In publicity photos for MediSafe, the intern’s face has been blurred out or his back faces the camera.

Some West Bank entrepreneurs say that the major impediment to tech development in the Palestinian territory isn’t young techies’ lack of exposure to high-tech firms so much as the Israeli occupation itself. On the one hand, the West Bank tech industry has made strides in recent years, attracting millions of dollars in startup investments, and now accounts for six percent of the Palestinian economy. “There is a sense that given the whole political context, tech could be an industry that would be relatively stable,” said PIP’s Fenster. “All you need to have a startup company is laptops and an internet connection and so the feeling is that there is an agility and flexibility with high tech that could be useful within the Israeli-Palestinian context.”

But on the other hand, Israel’s restrictions have inhibited the Palestinian tech industry from reaching its full potential. Abudaka points to the fact that Israel won’t allow 3G access — which the Civil Administration contends is for security reasons — in the West Bank as one impediment. Another has to do with education. While Israeli universities can access scholars from all over the world, West Bank universities must first seek permission from Israel to bring in foreign instructors. Then there’s the fact that Israel controls imports into the West Bank, which can lead to lengthy delays — an issue the Civil Administration said it is working to address. The result is that while the Palestinian tech scene has pockets of innovation it’s also mainly a service economy providing software development for foreign companies — including Israel — without making major breakthroughs of its own.

Since October, Israel has actively encouraged this service economy by creating a new 6-month permit for Palestinians developers, who used to have to renew their permits to work inside Israel on a weekly basis. Israeli and Israel-based companies contract with Palestinian businesses to hire inexpensive developers next door, which they would have otherwise found in Eastern Europe or East Asia. The motivation for the new program is to boost employment in the West Bank, especially in the tech sector, where only a third of tech graduates find work. The Civil Administration believes that higher employment rates will lead to less instability in the Palestinian Territories. “The unemployment is very high and the stability for the Palestinian Authority is getting lower and lower,” said Moshe Braha, the lieutenant colonel head of the economic branch of the Civil Administration. “We don’t want them to be poor, we don’t want them to protest against the Palestinian Authority and have the Palestinian Authority deal with, I don’t know, angry young men.”

In terms of the West Bank’s own tech scene, political instability can also be a major impediment to encouraging business. But instability won’t go away until the occupation does, said Sam Bahour, a business development consultant in Ramallah. “You need to be able to sell yourself as a viable business to be able to get investors, and when people know you are based in Palestine, you have to start selling Palestine,” he said. “Nobody wants to sign a contract with a company that might not be online if there is a war or restrictions.”

Bahour is critical of programs like PIP. “The ‘two sides working together make everything peachy keen’ approach has failed over the past 20 years,” he said. “The interns get to see the Western business environment. But this hasn’t resulted in the structural change that was hoped for. It’s part of the people-to-people approach which has failed to change things politically.”

In Taha’s case, the internship hasn’t led him to the West Bank just yet. He spends half of his time at work on a startup he created with a Canadian Jewish classmate he met during his M.B.A. program at the Technion, Israel’s science and technology university. The company, called Zolair, sells large, rechargeable zinc batteries to off-the-grid communities in the developing world.

He spends the other half of his time at Takwin Labs, which hired him after his internship. Working throughout the week in the West Jerusalem office, he often comes home to a bevy of questions from his mother: “Are they treating you well? Are you being paid? Do you feel comfortable? Be careful.”

But her questions, he said, aren’t about politics. “I think whether I would be working with Israelis or with Arabs it would be the same,” he said. “It’s what moms ask their sons.”

Can Internship Program Build High-Tech Bridge Between Israel and Palestinians?