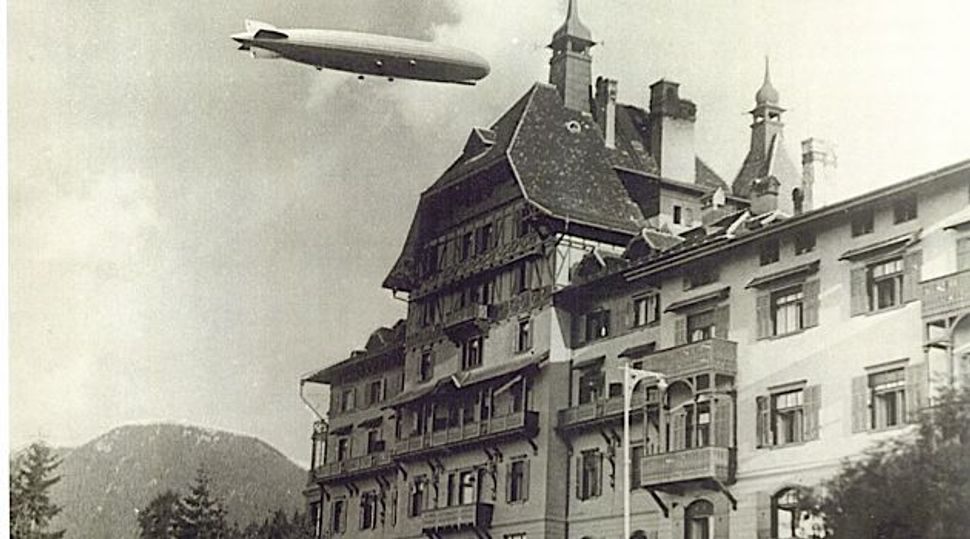 Rooms With a View: The Südbahnhotel played host to Sigmund Freud, among others. Image by Courtesy of Yvonne Oswald 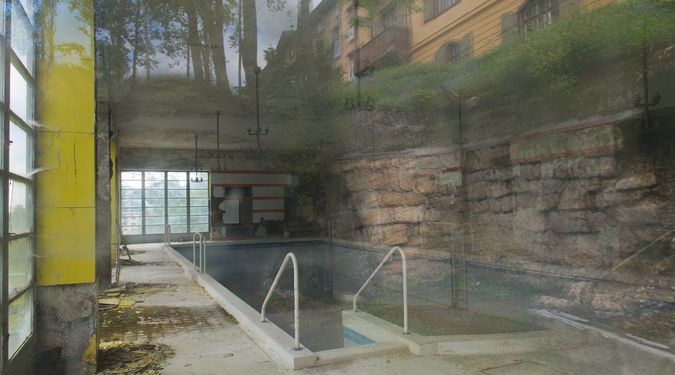 Forward Into the Past: The Südbahnhotel is well protected from outsiders and has 24-hour security on site Image by Yvonne Oswald

For the last five years, Austrian artist Yvonne Oswald has been attempting to recreate a world where Alma Mahler, Franz Werfel and Gerhart Hauptmann shared conversations over dinner, while nearby, Arthur Schnitzler wrote in his diary.

In this fantastical universe, visitors stood on hotel terraces that looked out toward golf courses and ski jumps, while carriages below brought the likes of Sigmund Freud, Karl Kraus and Thomas Mann from the train station to mingle in spas and exquisite ballrooms.

From the late-19th century up until World War II, European Jews regularly vacationed in such opulence at majestic resorts in the Austrian Alps, in much the same way as Americans retreated to the Catskills during the 20th century. And just like the Catskills, the hotels of the Alps are deteriorating.

Oswald has chronicled the history of one such destination, the Südbahnhotel, located in Semmering, an hour south of Vienna. Her work culminated in a book, short films, as well as exhibits throughout Austria, including one currently on display at the Jewish Museum Vienna.

“For Jews, there was no old aristocracy in the mountains,” said Oswald. “They could live a dream this way.”

During its prime, visitors would enter the Südbahnhotel’s lobby and see it bustling with artistic luminaries, royalty from Europe and Asia and performers like Josephine Baker, who sang at the hotel. Schnitzler often sat here observing hotel employees he’d later write into “Das weite Land.” 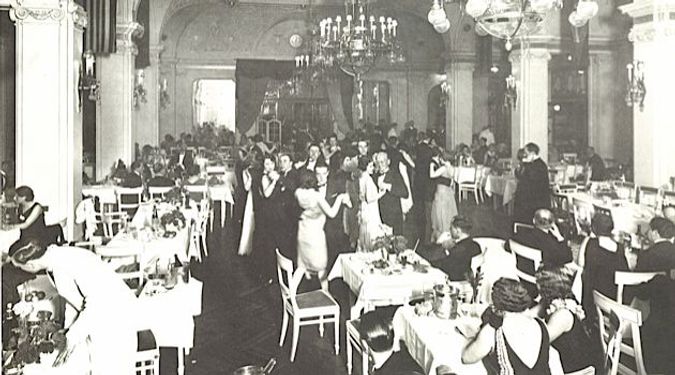 Do I Hear a Waltz? During its prime, visitors would enter the lobby of the Südbahnhotel and see it bustling with artistic luminaries. Image by Courtesy of Yvonne Oswald

Stefan Zweig was another writer who included the Semmering hotels in his work — some of which was penned at the Südbahnhotel. They later provided inspiration for Wes Anderson’s recent film “The Grand Budapest Hotel.”

But for Oswald, the rooms where “Burning Secrets” was conceived — and their subsequent fade into obscurity — represent a symbol of neglect by the Austrian government, a key artifact of history ignored.

Oswald believes the hotels should be recognized as more than just Hollywood fodder. “I thought a lot of how would it be, how did they behave?” she said. “How was it to be a woman then? As a Jewish lady, imagining the baron trying to pick you up. How did you feel? Just wondering how complicated societal relations worked.”

Oswald grew up in western Austria and first saw the hotel on a trip to the area 15 years ago. Struck by its beauty, she spent the next decade researching the history of the Semmering hotels. Though her book was published earlier this year, she still visits every few weeks, hoping to find an undiscovered nook amongst the Südbahnhotel’s 356 rooms and to keep abreast of its status. Wealthy Ukrainian, Russian and Middle Eastern investors have showed interest in buying property in Semmering in recent years, she said.

On Oswald’s most recent trip, in early October, she opted to drive instead of taking the train. After driving for 30 minutes on the Südautobahn, south of Vienna, the sight of IKEA stores and shipping containers are replaced by bright green hills and eventually the outline of towering mountains.

“It’s always like coming into another world,” Oswald says. “It strikes me every time I come here. It’s like a fairy tale.”

Railroad construction from Vienna began in the mid-19th century and took 20 years to complete. Upon arrival at the local station, passengers took cable cars and carriages to the hotels, some of which seemed to be carved into the face of mountains. Today, many have been renovated to host more commercial enterprises, such as hospitality training schools.

Toward the end of World War II, fighting reached Semmering, and the Nazis and later, Soviet armies, stationed themselves nearby, according to Oswald. Almost all hotel records were lost or destroyed — Oswald said she only found menus from that time period.

“It’s a wonder this place is still standing,” she said.

Today, a walk through the main floor of the hotel reveals that much of the area outside the lobby is ruined. Exposed brick and peeling wallpaper are more common than the glistening chandeliers prevalent a century ago — most of the building’s light now comes from the sun.

There is a taste of dust in the air, and the wooden floors, which creak with every step, are permanently coated in white. On the terraces, where Oswald imagines wondrous conversations once took place, puddles of water have created a slick surface where no one would want to tread.

When the hall was humming with a staff of 600 (who had separate facilities for their housing and even laundry), one could imagine it being difficult to find serenity on this mountain. But Zweig’s diaries and dispatches from other guests suggest otherwise, Oswald said.

On the upper floors of the hotel, the sunshine does not break through as much; the unfussy guest rooms there were set up for quiet and rest. Equipped with a bed, a desk and a chaise longue, these were the locations where many writers came to work. The mattresses are gone now and the large, thick doors stuffed with horsehair and covered with faded green leather are hard to handle; it takes force to pry them open.

Oswald still opens almost every door she walks by, looking for something new, curious about what’s inside. When she’s finished, she closes the doors behind her to make sure that winds don’t whip through and slam them closed, causing more damage.

“Every time I come here, something else broke down,” Oswald said.

There are some intricacies that can still be found in the interior design of the rooms. Small, diamond-shaped mother-of-pearl inlays decorate the headboards of the beds. And on her latest trip, Oswald focused on the tiles in the hallways. A local artist recently told her that she believed the tiling was created by the Schwadron brothers, two Jews who were leading ceramic dealers in early-20th century Vienna and who left a special insignia on a tile at each of their projects. However, Oswald could not find their marking this time.

Because of the hotel’s current state, Oswald had difficulty gaining permission to shoot at the Südbahnhotel. Unlike in the Catskills, where many hotels have fallen victim to graffiti and vandalism, the Südbahnhotel is well protected from outsiders and has 24-hour security on site. Oswald was able to convince the current owner, a German businessman, to let her in by narrowing her work to the history of the remains. She promised to tell the story of what the hotel was, not what it has become.

Oswald began shooting with a Nikon D200. In the winter, it often became so cold that her camera wouldn’t work.

“When the snowstorm is all around the hotel, you all of a sudden feel you are in a ship, floating far above the real world, and when the autumn wind howls around the building, then the doors start to move and you hear a lot of noises in the hotel,” she said. “Sometimes I really had the feeling that there were people walking. I generally don’t believe in these kinds of things. But when it started to become dark I had to leave the hotel. It is very lonely working up there.”

Parts of the Südbahnhotel property away from the main hotel have been converted into residential apartments. But its future as a whole remains uncertain.

“Nobody wants it,” Oswald said, “unless the government has a plan for a cultural monument. It will never be a hotel anymore. People who came in their heyday are dying or are too old to come up here. The young have feelings but it doesn’t mean anything.”

Oswald added that foreign buyers would likely be less interested in its local cultural history, and the Austrian state has also been reluctant to invest.

“People tell me their parents took them as kids,” Oswald said. “After the war, it wasn’t a place to be anymore. Nobody had money and those that had money went to Italy or somewhere else.”

Letting out a prolonged sigh, she said that she hasn’t lost all hope. “People also say, ‘Oh it would be so fantastic to have it open again and to have something done with this beautiful monument.’”

Seth Berkman is a frequent contributor to the Forward.