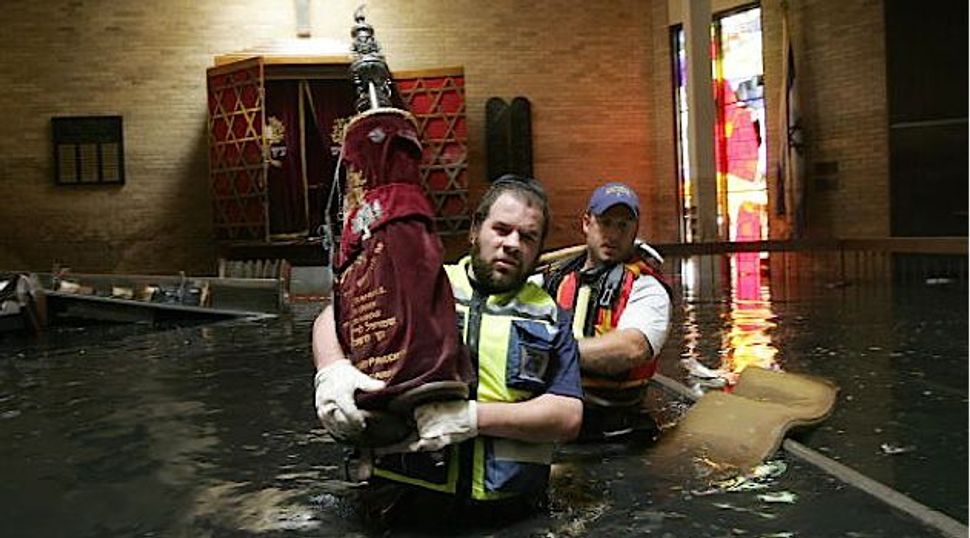 Down Under: In 2005, Hurricane Katrina destroyed more than 7 torah scrolls of the Congregation Beth Israel in New Orleans. Image by Getty Images

3) Judah Benjamin was a U.S. Senator from Louisiana from 1853 to 1861. After that, he became the Attorney General and subsequently the Secretary of War for the Confederacy.

4) Congregation Beth Israel was at one time in the sixties the largest Orthodox synagogue in the south, but after Hurricane Katrina (which destroyed more than 7 torah scrolls and 3,000 prayer books), more than half of the synagogue’s 9,500 members left.

5) Sylan, Leon, and J. Isaac Friedman, all from the same family, served in the Louisiana House of Representatives and the State Senate from the 1920’s through the 1950’s.

6) In 1903, the small town of Kaplan was named after local business leader Abrom Kaplan. As of the 2010 census, the town’s population is 4,600. It is located south of Lafayette and immersed in the Cajun culture of Vermilion Parish.

7) Lou Pearlman, who constructed the famous boy bands of the nineties, such as the Backstreet Boys and N’SYNC (and was convicted of a $300 million ponzi scheme in 2006), was at one time the manager of Britney Spears, who grew up in Kentwood, Louisiana.

8) In 1988, Jewish songwriter Randy Newman released the album ‘Land of Dreams,’ which detailed his experiences growing up in New Orleans.