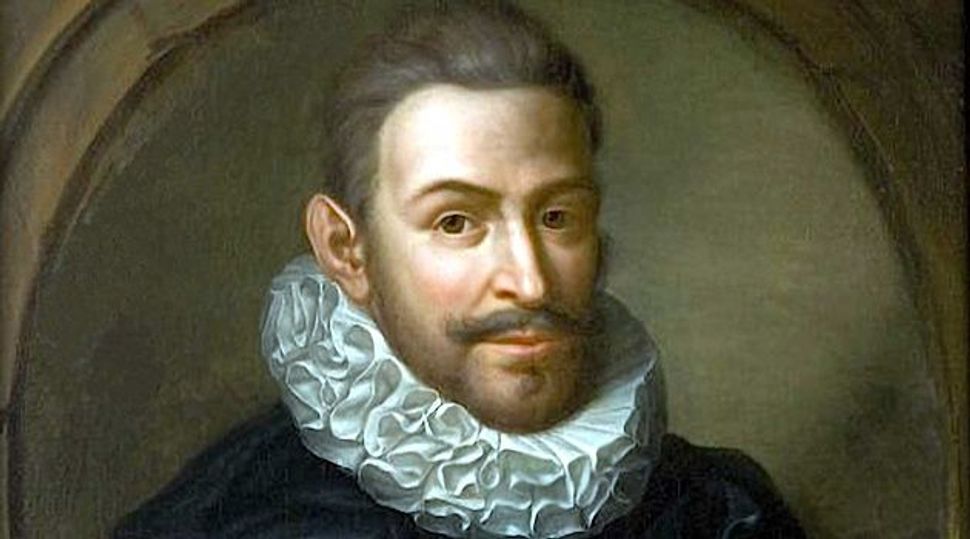 17th Century Man: Petrus Cunaeus proposed that the political organization of ancient Israel could be a model for contemporary European politics. Image by wikimedia commons

A newly published book, Norman Berdichevsky’s “Modern Hebrew: The Past and Future of a Revitalized Language,” is an excellent survey of its subject. In just 200 pages, Berdichevsky manages to touch succinctly but informatively on nearly every aspect of Zionism’s successful revival of Hebrew as the spoken language it had not been for two millennia — a feat unparalleled in human history

Perhaps the most thought-provoking section of Berdichevsky’s book, however, is its musing about the future in a chapter questioningly titled “From Jewish State Toward a Hebrew Republic?” Here, Berdichevsky argues that the best hope of forging a common Israeli identity in which Israel’s Arab minority could participate along with its Jewish majority is for the former to adopt Hebrew as its language, so that just as the inhabitants of France, say, feel French regardless of their ethnic, religious or political differences by virtue of being French speakers, so that the inhabitants of Israel will all feel equally Israeli by virtue of speaking Hebrew.

To be sure, Berdichevsky is not the first writer on the subject of Jewish-Arab relations in Israel to make such an argument, nor is “Hebrew Republic” his original term. It has an old history, going back to such books as Carlo Sigonio’s 1582 “De Republica Hebraeorum,” a study of ancient Israelite institutions and their relevance to contemporary European ones, and Petrus Cunaeus’s thematically similar 1617 work of the same name. More recently, the political and economic commentator Bernard Avishai applied the term to the Israeli-Palestinian conflict in his 2008 “The Hebrew Republic: How Secular Democracy and Global Enterprise Will Bring Israel Peace at Last.” Avishai, though, is interested mainly in economics as a potentially unifying factor between Jews and Arabs. Berdichevsky believes in the primacy of language.

Is his vision realistic? Although nearly all Israeli Arabs (and a high percentage of West Bank Palestinians) speak Hebrew with varying degrees of proficiency, all speak it as a second language, not as the mother tongue in which they were raised or in which they raise their children; that remains Arabic. Even if one were to agree with Berdichevsky on the desirability of Arabic being exchanged for Hebrew, is there any chance of this happening? Or are we dealing with a well-intentioned fantasy that has no basis?

Historically, of course, linguistic assimilation is a perfectly ordinary process. Minorities living among more powerful majorities that speak a language different from their own, as well as majorities ruled by conquering minorities whose language has greater prestige and social advantages than their own, have adopted that language time and again. Sometimes this has happened quickly, sometimes slowly; various political, cultural and demographic influences have determined the outcome. Nearly all the native tribes of North America, for example, or at least those of them that survived, gave up their native tongue entirely within 100 years of their military defeat by white settlers and switched to English. In many parts of South America, on the other hand, native languages like Quechua, Aymara, Guarani, and Nahuatl are still spoken today by tens of millions of people more than five centuries after the Spanish conquest.

Unfortunately for the proponents of a “Hebrew republic,” a number of determinants promise to slow down rather than speed up the possible adoption of Hebrew as a first language by Israeli Arabs. One is anti-Arab prejudice among Israeli Jews, which makes the social and economic integration of Arabs into Israeli life difficult. Another is the existence of a huge, Arabic-speaking world surrounding Israel’s Arabs, one that most of them feel a part of and wish to remain associated with.

Yet another factor is Islam. Close to 90% of Israeli Arabs are Muslim (the remainder are Christians and Druze), and the Quran — like the Hebrew Bible, but unlike the Christian New Testament — is language-linked. For Christianity, it does not matter greatly what language the New Testament is read in, or prayers are said in, because the New Testament is considered the work of human authors rather than divinely revealed, and God has no preferred language. But Jews believe the Bible, and Muslims believe the Quran, to be God-given, which means that the Hebrew or Arabic in which they were given is sacred, too. One does not abandon a sacred language as easily as one abandons a nonsacred one.

For all these reasons, the great majority of Israeli Arabs are not about to start adopting Hebrew as their mother tongue in the historically foreseeable future. Although the process will be quicker among Christians and Druze, it will probably, in the best of cases, take quite a few more generations among them, too. Already today one hears many Israeli Arabs incorporating numerous Hebrew words and expressions in their Arabic speech, and Hebrew is becoming more and more a part of their lives; yet to the best of my knowledge, there is still not a single Arab family in Israel in which Hebrew is the language of the home, and until the first such families show signs of appearing linguistic, assimilation is at an early stage. The “Hebrew Republic,” alas (for I, too, would like to see it come to pass), is still far away.