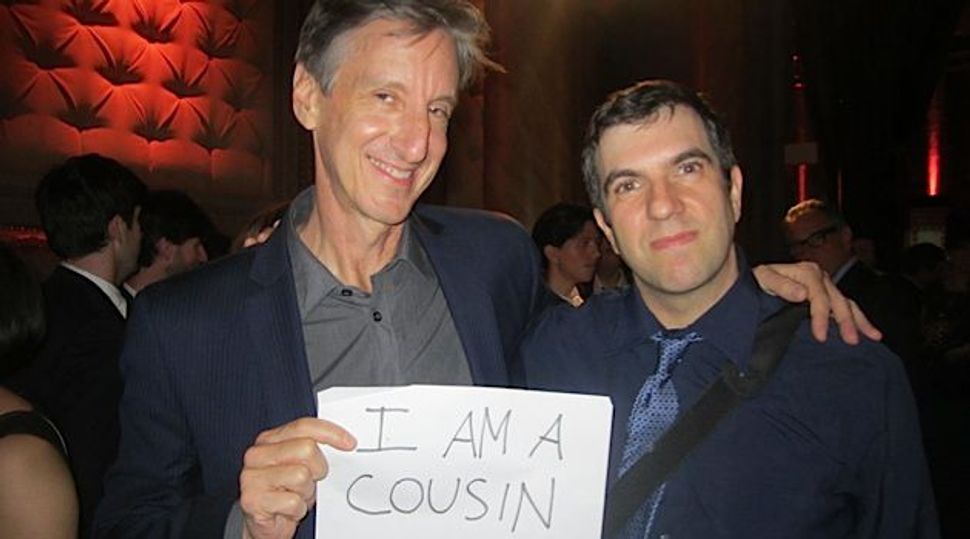 The reason I know this is because Jacobs is in the midst of creating the world’s largest family tree and planning the largest family reunion in history. He finds connections among families around the world using massive genealogy websites like Geni and its parent company MyHeritage, which contain tens of millions of user profiles and have access to billions of historical records.

On June 6, 2015, Jacobs will hold an all-day “Global Family Reunion” in the New York Hall of Science, the site of the 1964 World’s Fair. He hopes that some of the dozens of celebrities whom he has identified as “cousins” — including Daniel Radcliffe, Olivia Wilde, John Legend and George H.W. Bush — will be there. However, anyone can join the party and the larger project, which Jacobs will turn into a book. (Regarding the book, Jacobs half-jokingly said: “One plan that I have is to thank every member of my family in the acknowledgements, so that’ll be two-point font and about 2,000 pages.”)

These are cousins in the “largest sense of the word,” Jacobs explained, because some of them are related to him through a series of marriages, not just through blood ties.

Nevertheless, he is convinced that even the smallest ties between people can alter the way they think about each other. He used the example of Judge Judy, whom he used to find obnoxious.

“Then I found out through these websites that I am her eighth cousin four times removed,” Jacobs said. “I’m actually blood relatives with Judge Judy. And it changed my perspective, it actually made me reassess. I said maybe I should give her the benefit of the doubt.” Jacobs is known for what is sometimes called immersion journalism. His books take an idea to the extreme — think Morgan Spurlock (a good friend and distant “cousin” of Jacobs) in his 2004 film “Supersize Me,” in which Spurlock eats only McDonald’s food for 30 days. For his first book, Jacobs read the entire Encyclopedia Britannica in an attempt to become the “smartest man in the world.” In his next book, “Living Biblically: One Man’s Quest to Follow the Bible as Literally as Possible,” Jacobs detailed a year he spent growing a big beard and following all of the Bible’s obscure instructions. In 2012, after another book filled with a variety of experiments, he published “Drop Dead Healthy: One Man’s Humble Quest for Bodily Perfection,” in which he tried a variety of diets and exercise routines.

When Jacobs got an email a year ago from an Israeli genealogist named Jules Feldman, who said that he had independently constructed a personal family tree with 80,000 people on it, he was skeptical at first.

“It turns out he’s legit and he’s part of this new movement of genealogists who are doing these massive family trees,” Jacobs said. “Seeing the breakthroughs that are happening because of the Internet and DNA [testing], I just found it so compelling and I had to make it my next project.”

Since hearing from Feldman, Jacobs has been constructing his own enormous family tree with the help of researchers at MyHeritage, FamilySearch (the largest genealogy organization in the world, run by the Church of Latter-Day Saints), and WikiTree (which is similar to Geni but much smaller). When I last asked Jacobs how many people he has found connections to, he said 80,124,432 — however, the total is now far beyond that, as it increases every minute.

Jacobs shares a goal with Geni: to make a global family tree that connects everyone in the world in some way through blood or marriage. Geni offers a free service that allows anyone to create a family tree and share their information with others, while sites such as MyHeritage and FamilySearch give subscribers access to historical documents that can be used to create a more verifiably correct family tree. Aaron Godfrey, the public relations director at MyHeritage, explained that the site has licensing agreements with archives, libraries and other institutions that own documents that help people perform genealogical research, from old birth certificates to military records. 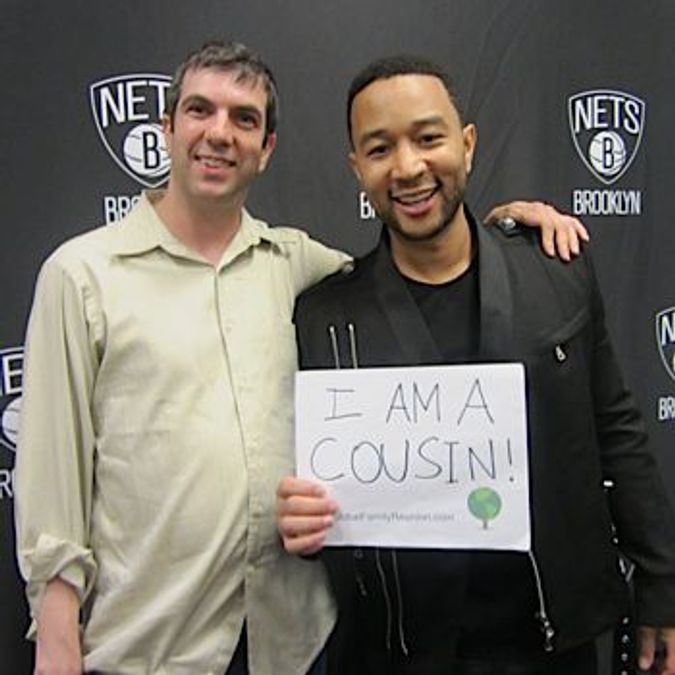 Legend In His Own Family: Jacobs poses with singer-songwriter John Legend. Image by Courtesy of A.J. JAcobs

However, that does not mean that these companies turn genealogy into a perfect science. Jacobs compared the rise of Geni to the rise of Wikipedia, which became more accurate over time as more people contributed to editing the public site. He said many people now wade through the family tree information, weeding out false or duplicate information.

“They call themselves forest rangers, which I love,” Jacobs said.

Godfrey said that MyHeritage uses advanced technology to help correct users that make inevitable mistakes, such as confusing a relative’s name in another language. The company also recently partnered with 23andMe, a personal genetics company that sells streamlined genetic testing services, which allow people to send in saliva for analysis.

“DNA and family history are very interconnected,” Godfrey said. “Because DNA can tell you your ethnic origins, it can tell you your geographic origins, and it can maybe tell you about ancestors who lived hundreds of years ago. But what you need is the family history to help match those connections. So if you’re told you have an ancestor, how are you related to them? How do you get a path to that person?”

“Part of the project is all about family history and memories and stories,” Jacobs said. “And if someone has Alzheimer’s you lose that.”

At its core, Jacobs’s project also has other humanitarian — and Jewish — roots. This summer’s war in Gaza and other conflicts around the world helped fuel his goal of showing people how closely related they are to people of other backgrounds and religions.

“We are all family,” he said. “We share 99.9% of our DNA. And one of the things I found fascinating when I wrote about the Bible was that one of the foundational ideas of monotheism is that we are all God’s children. So this is very much in the tradition of monotheism and Judaism.”

Jacobs says he would be happy even if his project makes people think just a little bit differently about each other.

“I don’t expect that this project is going to cause world peace to immediately break out,” he said. “But I do think that it can’t hurt, and it’s going to nudge us in the right direction.”