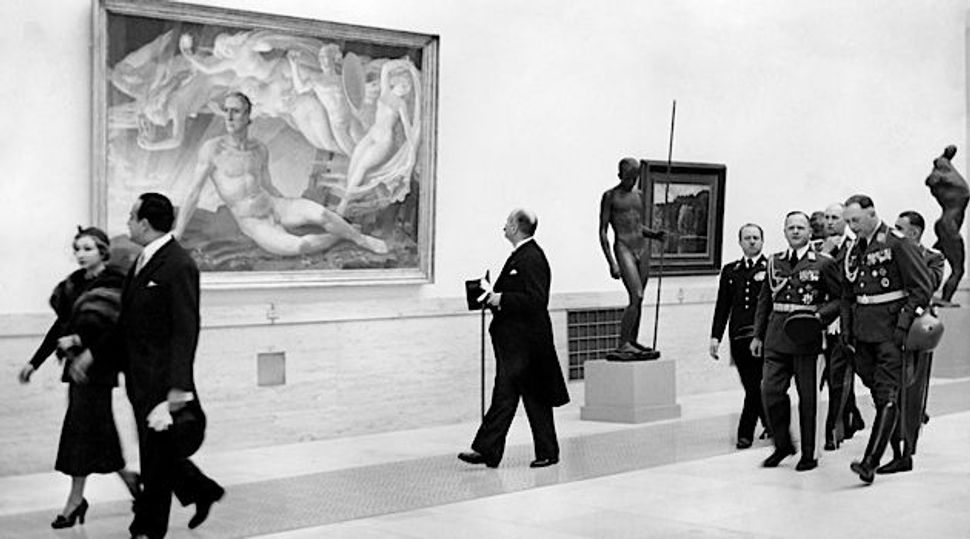 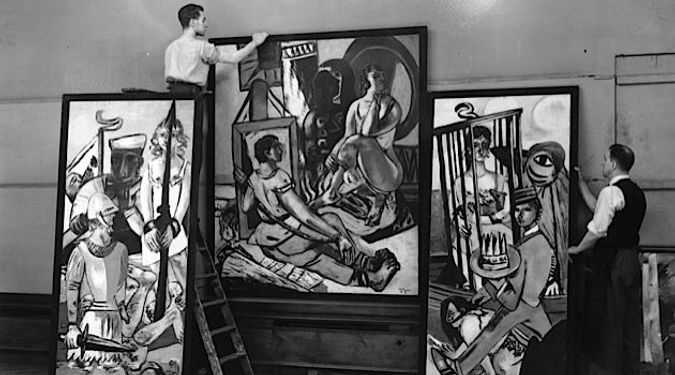 What An Expression: Painter Max Beckmann (left) was included in the 1937 ‘Degenerate Art’ exhibition. Image by Getty Images

Nearly 70 years after the end of World War II, newly available archives and probing scholarship are sharpening our perspective on daily life, culture, political infighting, and collaboration and resistance in the Third Reich.

Jonathan Petropoulos’s “Artists under Hitler” is a worthy — if occasionally dense and meandering — contribution to that project. It encourages us to look critically at aesthetic and moral choices made under the constraints of a dictatorial (but not yet genocidal) regime, and to set aside simplistic notions about the reactionary nature of Nazi culture.

Petropoulos, a history professor at Claremont McKenna College and an expert on Nazi art expropriation and restitution, begins with a provocation: “Conventional wisdom insists that any genuinely interesting art was rooted in the modernism of the Weimar Republic, while Nazi culture, with its rigidity and monumentality, was bad. This view is both coarse and wrong… Fascism did not defeat modernism.”

Petropoulos argues that modernism in various forms persisted under Hitler, though it was embattled, censored, banned and sometimes shaped by National Socialist tropes. In the early years of the Third Reich, such important taste-makers as Joseph Goebbels, the regime’s cultural czar, defended certain non-Jewish modernists, including the expressionist sculptor Ernst Barlach, whose work he collected. Barlach later was included in the notorious 1937 “Degenerate Art” exhibition, which signaled the regime’s full-out assault on modernist tendencies in the visual arts.

Petropoulos defines modernism broadly, across disciplines, as the rejection of “verisimilitude and traditional historicist idioms” and the development of aesthetic strategies such as abstraction, non-realistic color, atonality and dissonance, and nonlinear narrative structures. The opposite of modernism, for Petropoulos, is so-called völkish culture, which embraced social realism, folk melodies, and propaganda motifs.

According to this schema, Leni Riefenstahl’s famous documentaries, “Triumph of the Will” and “Olympia,” were modernist in their use of abstract compositions and other avant-garde techniques and völkish in their exaltation of Nazi ideology. Riefenstahl, who adored Hitler and used concentration camp prisoners in one of her films, is a rare instance of an avowedly Nazi artist whose work won admirers in Hollywood and beyond. 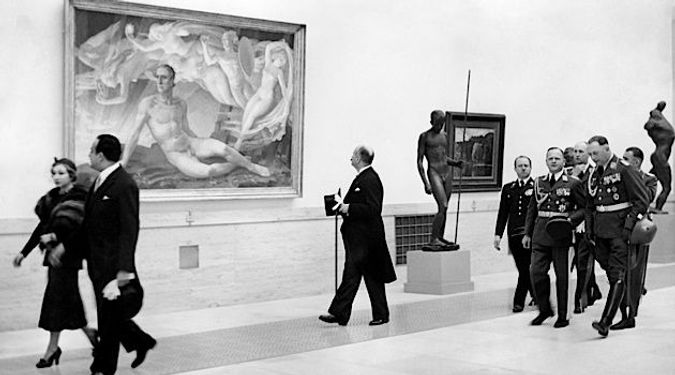 Along with tracing the durability of modernism, Petropoulos details the efforts of various artists — from Nazi enthusiasts such as Riefenstahl and the architect Albert Speer to more conflicted figures such as Walter Gropius and Richard Strauss — to find a modus vivendi with an increasingly radical National Socialist regime. What unites virtually all his subjects is their postwar desire to obfuscate their pasts by minimizing their artistic and political compromises, as well as their knowledge of Nazi criminality.

Gropius, as the founder of the Bauhaus school and one of Germany’s most esteemed and well-connected cultural figures, is an interesting case study. His relocation to Great Britain and then the United States, in Petropoulos’s words, “helped to obscure the period he spent in Germany trying to find accommodation with the Nazi regime.”

Despite left-wing inclinations in his youth, the mature Gropius considered himself “an artist above politics” and, according to Petropoulos, “viewed his vision of a community shaped by architecture as consistent with the aspirations of the Nazis.” Gropius never joined the Nazi Party. But as was required to continue his architectural practice, he enrolled in the Reich Chamber for the Visual Arts, which entailed proving his “Aryan” ancestry.

In a 1933 competition to build the Reichsbank, Gropius submitted an entry that combined monumentality, symmetry and neoclassicism — all hallmarks, Petropoulos says, of fascist architecture. Along with the modernist icon Mies van der Rohe, Gropius helped design a 1934 propaganda exhibition titled, “German People – German Work.” He also submitted a design for a Berlin leisure facility that featured drawings with swastika-emblazoned banners. After leaving for Great Britain later in 1934, he returned periodically to Germany, and he sought the regime’s approval before accepting a position at Harvard University in 1936.

The composer Richard Strauss, by contrast, stayed in Germany and even served as president of the Reich Chamber of Music. “Clearly, his behavior rested upon a misassessment of the Nazis,” Petropoulos writes. “But beyond that, ego played a key role.” (Petropoulos cites similar reasons, along with careerism, to explain the behavior of other artists.)

In some ways, Strauss appeared to be playing a double game. He was “not totally immune to the anti-Semitism so prevalent at the time” and sometimes pandered shamelessly to Nazi officials, Petropoulos notes. But he also wrote sympathetically to his Austrian Jewish librettist, Stefan Zweig, and intervened to save the lives of his Jewish daughter-in-law and two grandchildren.

In a narrative that alternates between art and politics, Petropoulos sketches the choices made by a cross section of non-Jewish artists in Nazi Germany and, more briefly, a few living in occupied countries. Among those profiled at some length are the celebrity actor Gustaf Gründgens (portrayed as “a cynical but tortured opportunist” in Klaus Mann’s 1936 novel “Mephisto” and an Academy Award-winning 1981 film); the sculptors Barlach and Arno Breker; the expressionist writer Gottfried Benn; and the composer Paul Hindemith.

Petropoulos insists that his aim is not “to sully the reputations of modernist cultural figures,” but rather “to achieve a more nuanced understanding” of their actions and their art. He manages to do both.