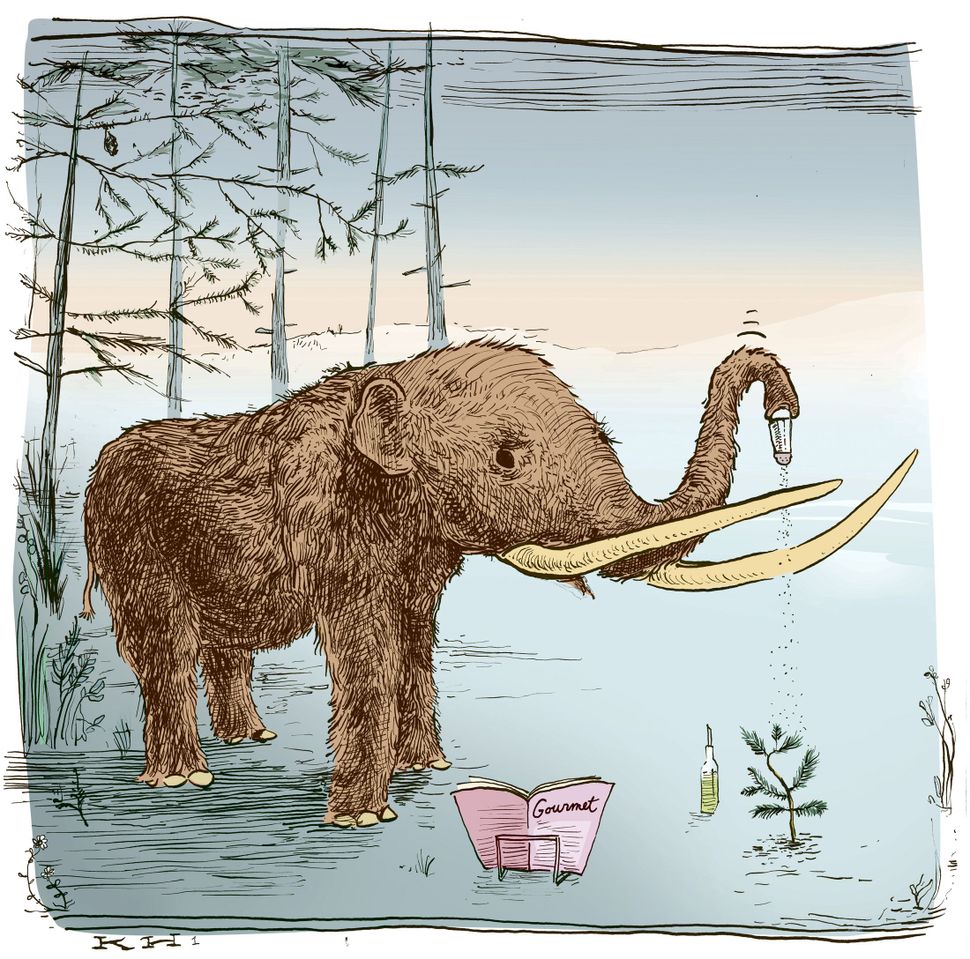 For a woman her age, Jan Longone moves incredibly fast when she’s eager to point something out. The 81-year-old with a plump, soft face and fierce eyes direct from yenta central casting demanded that attention be paid to a French guidebook from the 1960s, open to a page with the loopy autograph of the then-up-and-coming, now-legendary chef Paul Bocuse. Next to that was a black-and-white photo of Bocuse with Jan Longone and her husband Dan Longone, from half a lifetime ago when they dined at his first Michelin-rated restaurant in Paris.

Most gourmands would want to display such prized possessions prominently in their homes, to serve as inspiration for telling dazzling tales of culinarily-motivated travels and brushes with greatness at the decades of dinner parties to come.

But these items soon will no longer be her property. She pointed at them, instead, through the glass of a display case in the dimly lit exhibit room of the graduate library at the University of Michigan. It is one of many artifacts from a fall 2014 show she mounted paying tribute to the late Gourmet Magazine. The autographed guidebook was a lesser-known publication of the classic culinary periodical, which shut down abruptly in 2009, and almost all of the items on display have at some point migrated from Longone’s personal possession to the library’s 15-year-old Janice Bluestein Longone Culinary Archive.

Indeed, what others might view as an heirloom, Longone sees as another piece of a mammoth collection of food-related literature and ephemera — in this case, early documentation of a rising star who decades later would be so beloved and admired that a dining hall at the Culinary Institute of America in Hyde Park, New York, would bear his name. As such, she said, “People ought to be able to see it.”

What has become ever clearer in recent years is that Longone — though she herself has never been a professional chef nor restaurateur nor author — is just as much an icon of gastronomic history as any of those who worked with pans or pens. The JBLCA’s collection of 25,000 items that Longone collected throughout her lifetime, has drawn to Ann Arbor a constant stream of authors and researchers interested in what people ate, how they prepared it, and what that implies about the societies and cultures of countless times and places. One history graduate student used the archive for dissertation research, examining how, for instance, the presence or absence of raisins in kugel or sugar in gefilte fish reflect American Jews’ shifting relationship to their European heritage.

No less than James Beard himself regarded her vast holdings as an invaluable resource. (Beard died long before Longone turned over large sections of her collections to the university library.) She “codified American culinary history and created a benchmark,” he once wrote. “Not all the cookbooks are good cookbooks, but they are all interesting and the authors, mainly women, were an amazing group who did a great deal to influence American history.” Wendy Rose Bice of the Jewish Historical Society of Michigan regards it as “a point of pride that she’s from Ann Arbor and that Michigan libraries have chosen to preserve and invest in her collection.”

As with most collections, Longone began acquiring the material merely because it intrigued her, rather than with an eye toward maintaining an historical archive. She began seeking out books and magazines on American food in the 1950s when she and her husband were graduate students at Cornell University and frequently entertained foreign students for dinner. Always an adventurous cook, at first she sought cookbooks to help her make food that might give homesick international scholars a taste of home, but they also hungered for whatever might be defined as “typical” American cuisine.

“I started looking for and finding and then collecting books, and unbeknownst to me I must have decided I was going to open an antiquarian cookbook shop because I had been buying every book I could find in rare book shops but I’d buy four copies,” she said. “I must have known I was going to sell them or try to sell them.”

Indeed, once the couple was ensconced in Ann Arbor, where Dan Longone became a University of Michigan chemistry professor in the 1970s, Jan Longone began a mail-order antiquarian bookshop out of her home. The thirst for culinary literature and for access to rare texts was so great that before long the great luminaries of American food culture — Julia Child, Alice Waters, Ruth Reichl and New York Times food writer Craig Claiborne amongst them — all sought her out for advice. By the 1990s, she began to recognize the scholary value of the material and arranged to donate it and then curate it — for free — at UM.

“She has such a passion for the material, for the history, for the stories, that she would feel as though she was depriving people of relevant information if she were to keep her mementos and collections to her herself rather than treating them as historical documents,” said Mary Bilyeu, food editor of Ohio’s Toledo Blade, who has long relied on the JBLCA and Longone’s guidance for her research. “The thing Jan really understands about this subject matter is that it’s not just about the cookbook and the recipe. It’s about history and culture. The material she has shows how economics, dining habits, groceries, transportation have changed. These materials are hugely relevant to explaining the way we live.”

For Longone, who admired the giants of gastronomy, it was and remains a thrill to be of some use to them. “I have zero talent. I don’t sing, I don’t play an instrument, I don’t paint, I can’t do anything. But the minute I started cooking, I could look at a recipe and immediately know how it would taste, know how it would work, how I could change it,” Longone said. “I never followed a recipe distinctly. I just started getting this reputation as a knowledgeable cook and knowledgeable person about food history.”

Food memories can be traced all the way back to her upbringing in a six-family tenement in the Dorchester section of Boston. Her parents, Ukrainian immigrants, were secular Jews who celebrated holidays, didn’t keep kosher, but did have a natural taste for traditional fare and placed a high priority on eating as a family. Her favorite time of day, she recalled, was when her father would quiz her and her brother and sister about their days over gefilte fish or stuffed cabbage. The kitchen was such an important hub, she said, that as recently as November she and her brother, now 85, would reminisce by trying to remember what their old stove looked like. “I can see a picture of it in my mind, but he had a totally different picture of it,” she said. “So I sent him pictures of stoves from that era. We have lots of pictures from the old days in the archive.” 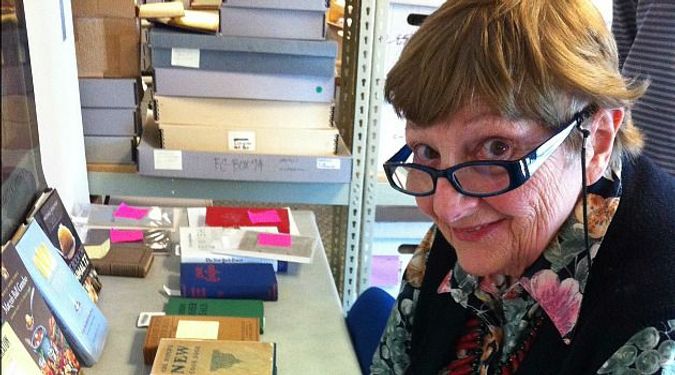 Cooking the Books: The 25,000 item collection in the University of Michigan’s culinary archive bears the name of its founder, Janice Bluestein Longone. Image by Steve Friess

In her curatorial efforts, Longone displays a similar zest for details. For a 2013 exhibit on Jewish gastronomic literature, “American Foodways: The Jewish Contribution,” Longone displayed the JBLCA’s copy of “Jewish Cookery Book,” an 1871 text believed to be the first Jewish cookbook published in America. In addition, she acquired Jewish charity cookbooks from synagogues and Jewish groups in every state, a daunting feat, but one that she said illustrated how widespread the interest in the cuisine has been over the centuries, as well as many intriguing regional culinary differences. Also on view at the exhibit were a variety of advertisements and labels for such gems as House of Moses wine and Levy’s Real Jewish Rye.

That Longone hasn’t merely donated her collection, but also uses it to contribute to a broader understanding of various cultures and epochs may explain why she is so revered. The JBLCA is not the largest or most important of the nation’s Jewish culinary collections — those of the New York Public Library, Harvard, and Hebrew Union College lead that list — but its emphasis on charity cookbooks makes it stand out as “a significant achievement,” said Roberta Saltzman, the New York Public Library’s Jewish-collection curator. “Very few charity cookbooks stay in print for many years.”

In 2011, the NYPL’s Culinary Historians of New York honored Longone’s lifetime achievement in culinary literature with the Amelia Award, named for Amelia Simmons. In 1796, Simmons penned the first known cookbook printed in America, which, Longone notes, introduced the pairing of turkey and cranberry sauce. The university, of course, has a first-edition copy thanks to Longone.

The now-concluded Gourmet exhibit may have been Longone’s second-to-last. She almost didn’t do it at all, but she realized that the JBLCA had an almost complete set of the magazine — they’re missing just one issue, March 1941 — and that the number of major cookbook writers, journalists and fiction authors who contributed to it made its life and death of significant academic value. Also, the magazine was a passion of hers and its ancillary publications were directly responsible for her obtaining that precious Bocuse autograph. “I thought it would be easy because I already knew so much,” she said. “Then I started going through the magazines and turning to my husband and saying, ‘Listen to this, listen to this one. Listen to this.’”

Her now-retired husband, Dan, has gamely cooperated with Longone’s efforts, most notably dedicating untold hours to accompany her on hunts through antique and used book shops. He’s urged her, though, to wind down her involvement, so her last show, she said, is expected to be a look at the evolution of menus and guidebooks over the decades, titled “Dining Out: Menus, Chefs, Restaurants, Hotels and Guidebooks.” That four-month show is expected to kick off at UM on Labor Day 2015.

The trouble is, Longone peeked down the calendar and realized that May 2016 is the 40th anniversary of the Judgment of Paris, a prestigious wine contest at which an American wine beat out French rivals in a blind tasting competition for the first time. The significance for U.S. vintners was massive, she said.

“Don’t tell Dan,” she said slyly. “He wants me to retire already.”

Steve Friess is a freelance journalist based in Ann Arbor, Michigan.