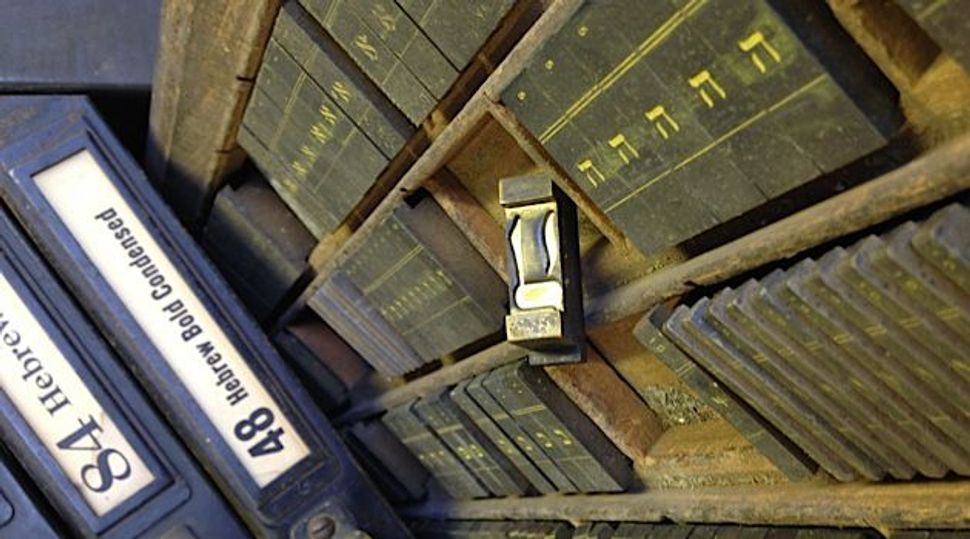 The Right Type: William Muller of Big Wheel Press is on the constant lookout for Hebrew or Yiddish fonts. Image by Lora Lavon 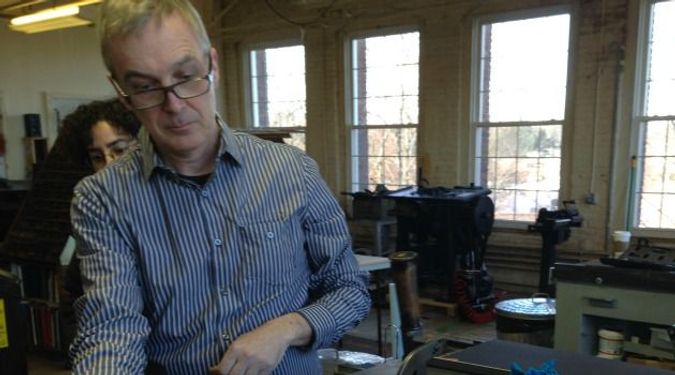 Who knew that we loved to listen to the air? Until the death of analogue music we never realized we craved the warmth of vinyl’s atmospheric cracklings, but in 2014 record sales spiked 49%.

And so it is with printing. Once we no longer rely for our news on swathes of newsprint hurtling through factories of machines in Chicago, New Jersey or California, we grow nostalgic. We sit at our silent, infinitely changing computer screens and yearn for the comforting splash of print on plush paper: the reassuring finality of the linotype and its products.

But yesterday’s deafening newsrooms (actually one of the few places ideally suited to employ a literate deaf person in the mid-20th century) are history, being recovered, piecemeal, by enthusiasts and artisans. And, now that they are not necessary or at massive scale, choices of individualized luxury can be made.

Using the connectivity of printing’s webby usurper, the Internet, a cadre of printing artisans dedicated to revisiting the possibilities of the printing press has grown up around the world. There are perhaps nearly 1,000 art printing shops in the world and I visited one of them, Big Wheel Press in Easthampton, Massachusetts. Run by William Muller, its particular focus is in printing in both Yiddish and Hebrew.

Founded in 2006 and currently based in an airy, light, fifth-floor studio of a converted factory, the self-styled “Last Yiddish hot lead shop in the world” enjoys its anachronicity but takes its craft seriously. There are three known linecasters in the world capable of casting Yiddish. Big Wheel Press has the only operating machine, the Yiddish Book Center has the second, and Ido Agassi in Israel has the third. But he has not fired up his linecaster in years. 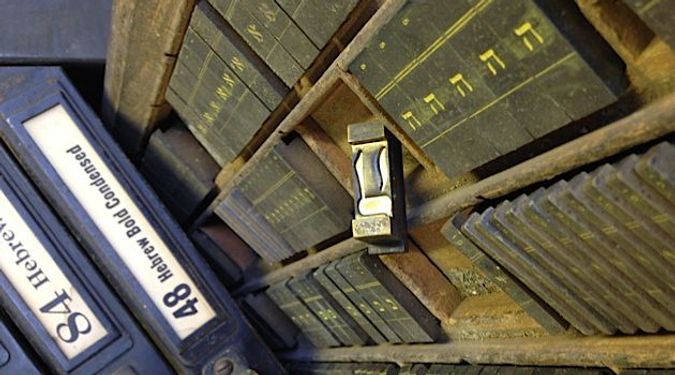 The Right Type: William Muller of Big Wheel Press is on the constant lookout for Hebrew or Yiddish fonts. Image by Lora Lavon

Muller adopts unwanted machines along with the fonts, decorative stamps and parts that they can use. A farmer once called him about a covered barrow out in one of his fields with some press-related scrap. Muller drove out to rescue the haul, which yielded a fragile Judaica print that he used on a greeting card. Big Wheel Press is a commercial enterprise, with invitation orders (Yiddish and Hebrew in bespoke designs: What could be better for your special day?) and a retail card business; it also offers tours and lectures about the history of Jewish printing. (Rembrandt made engraved etchings for one of the books of his neighbor, Menasseh ben Israel — who he also painted.) Muller is also the owner of the local fine art supply store, and the workshop feels like the immaculate workroom of an enthusiast.

He took my daughters to the letterpress and, holding its wheel like the head of a faithful hound, printed cards with their names on them. As he went through the process he lovingly explained its principles, expounding upon the exact shade of ink, the small chunks of metal with letters, the card stock. This was essentially the same process that was used to print Bibles in the 15th century and that made modernity possible. Without the mechanical storage and dissemination of information that Johannes Gutenberg’s introduction of printing to Europe pioneered, the industrial revolution could never have happened. We are living in the digital revolution of the information era, but Gutenberg ushered in the first Western analogue information revolution.

Then Muller took me over to a small linotype to produce my byline. In days past, a newspaper writer would only get a permanent byline, cast in lead, when he (or, rarely, she) had proved that it was more useful to keep that line separate rather than melt it down after use. Though I’ve written many articles that have “By Dan Friedman” at the top of them, I’d never really thought about a byline as an entity itself until I was hefting an actual physical byline in the palm of my hand.

Muller owns two large linecaster linotypes like the 15 or more that lived on the print floor of the iconic Forward building, 175 East Broadway, on the Lower East Side of Manhattan. When the newspaper moved to 33rd Street, in 1973, the few remaining linecasters in use were lowered into the basement during the construction of the building and then the main floor was laid above it. At their height, these machines printed over 200,000 copies a day, which were shipped all over the region.

In a letterpress, like Gutenberg’s original machine, composers lock movable type into the bed of a press, ink it, and press paper against it to transfer the ink from the type, which makes an inked imprint on the paper. The process can be mechanized — some of the beautiful letterpress greetings cards you see in stores, including some from Big Wheel Press, are produced from a letterpress using a motor — but even so the process is inherently arduous.

The innovation of the linotype was that one person at a keyboard could produce an entire line of type (hence the name) just with a few keystrokes. Before Ottmar Mergenthaler, a German immigrant watchmaker in Baltimore, saw how he could integrate several different technologies into his linotype in 1884, no newspaper had more than eight pages. The invention of linotypes facilitated the large mass newspapers that defined the period from the late 19th century to the advent of the Internet (although the machines themselves were superseded by new technology in the 1970s).

For the Forverts, and other Yiddish printers, the challenge was to set up the type right to left from a machine designed to go the other way. They did this by tricking out the keyboards and producing fonts that had notches in the right side rather than the left, which was standard. This was effective, but meant that no normal linotype could use them. So, during the drastic linotype cull of the 1970s, Yiddish fonts were the first victims because they were unusable in almost any machine that remained alive.

Their rarity means that Muller is on the constant lookout for Hebrew or Yiddish fonts that he can use. But the machines used to make the original ones have long since disappeared and the lack of real applications means those who are able to manufacture the objects are not always aware of how they should be compiled. Fortunately, some Yiddish fonts that have died are interred at the Yiddish Book Center in nearby Amherst. Muller regularly goes there and looks through the Center’s often unsorted holdings. It was here that Muller met Diana Clarke — currently a fellow at the Yiddish Book Center.

The two plotted a new publication. Clarke will translate into English 18 previously untranslated Yiddish poems by women, which will then be printed alongside the originals. “Hob ikh azoy dil gevandert, mayn liber,” or “I have wandered so long, my love” by Anna Margolin (pseudonym of Rosa Lebensboym) is currently being cast.

If, when Margolin wrote the poem in the 1920s, she walked to her work at the Yiddish daily Der Tog over the new Brooklyn Bridge, she would have been staring at the building-high advertisement for Yiddish printing that was the Forward building and gazing at a Manhattan that embodied Ruskin’s maxim “you can always make something a little cheaper and a little worse.”

A century later, Brooklyn has built a global brand out of making things a little more expensive and, perhaps, a little better. It is ironic that a tragically under-appreciated introspectivist poet like Margolin should benefit from our recovered enjoyment of the sensuous pleasure of crisp type deeply impressed into laid paper. Or perhaps the logic should go that if even the coolness of Margolin — a poet who rejected the banality of the material world in favor of the imagination — can be joyously rediscovered through materiality, then there is no text that the enthusiasm of a printer and the kiss of ink on paper cannot revive.