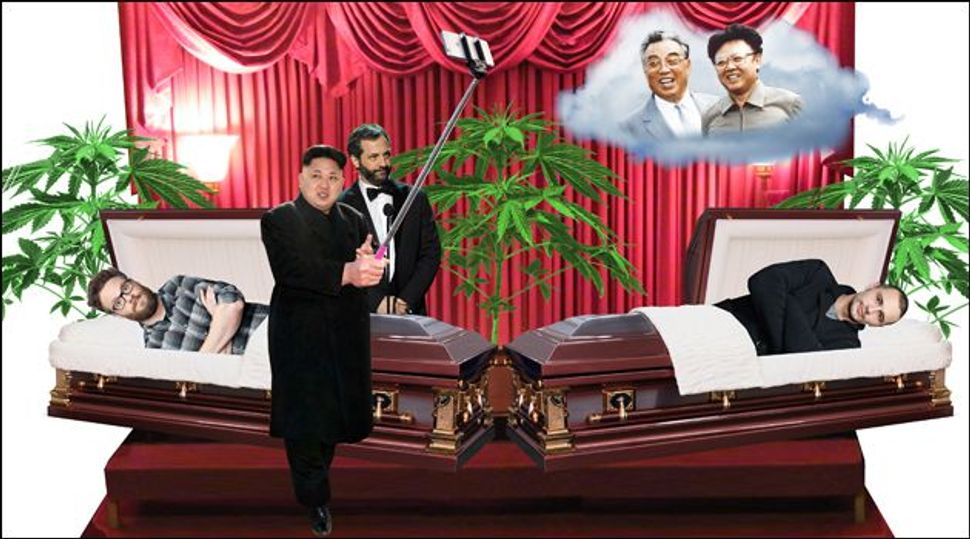 Joan Rivers, who died in September 2014, had her funeral all planned out in her autobiography.

“I want my funeral to be a huge showbiz affair with lights, cameras, action… I want craft services, I want paparazzi and I want publicists making a scene. I want it to be Hollywood all the way. I don’t want some rabbi rambling on; I want Meryl Streep crying, in five different accents. I don’t want a eulogy; I want Bobby Vinton to pick up my head and sing ‘Mr. Lonely.’ I want to look gorgeous, better dead than I do alive. I want to be buried in a Valentino gown and I want Harry Winston to make me a toe tag. And I want a wind machine so that even in the casket my hair is blowing just like Beyonce’s.”

Here are other self-planned Jewish celebrity deaths, funerals and shivas.

Assassinated by North Korea. A joint funeral (available for free streaming online, naturally) presided over by Judd Apatow. Visitors are encouraged to take advantage of the coffin-side selfie stick.

“Frozen” to death. The funeral is held on a beach, in the summer. As the coffin is lowered into the sand, Elsa belts out “Let It Go.” Sven cries. No one else does.

Death by … well, we won’t get into it. Funeral held in her native Long Island. No chairs allowed — everyone must squat. Those muscles won’t build themselves.

Distracted by his own genius while soul-searching big ideas for his latest indie-ish movie, Zach Braff falls into the “Garden State” pit. The funeral starts out AWESOME and ends up mildly interesting.

Killed by his fans for retiring too soon. There’s no funeral. He goes straight to comedy heaven.

After discovering that Arby’s holds the exclusive catering rights to heaven, he picks a fight with God and gets sent back to Earth as a Fox News correspondent.

Wears another cross to a talk show appearance, is struck by lightning. Funeral is held in the men’s section of the Kotel as a Women of the Wall protest. The coffin is lined with a rubber sheet — once a bed wetter, always a bed wetter.